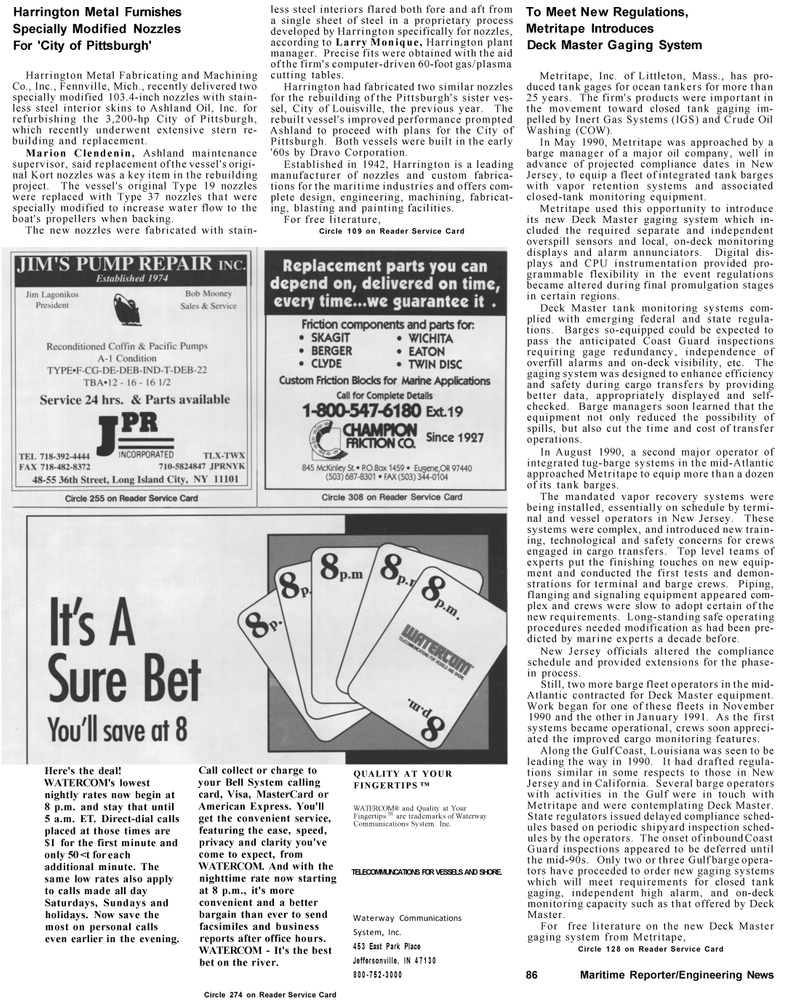 For 'City of Pittsburgh'

Marion Clendenin, Ashland maintenance supervisor, said replacement of the vessel's origi- nal Kort nozzles was a key item in the rebuilding project. The vessel's original Type 19 nozzles were replaced with Type 37 nozzles that were specially modified to increase water flow to the boat's propellers when backing.

The new nozzles were fabricated with stain- less steel interiors flared both fore and aft from a single sheet of steel in a proprietary process developed by Harrington specifically for nozzles, according to Larry Monique, Harrington plant manager. Precise fits were obtained with the aid of the firm's computer-driven 60-foot gas/plasma cutting tables.

Ashland to proceed with plans for the City of

Pittsburgh. Both vessels were built in the early '60s by Dravo Corporation.

Established in 1942, Harrington is a leading manufacturer of nozzles and custom fabrica- tions for the maritime industries and offers com- plete design, engineering, machining, fabricat- ing, blasting and painting facilities.

Metritape, Inc. of Littleton, Mass., has pro- duced tank gages for ocean tankers for more than 25 years. The firm's products were important in the movement toward closed tank gaging im- pelled by Inert Gas Systems (IGS) and Crude Oil

In May 1990, Metritape was approached by a barge manager of a major oil company, well in advance of projected compliance dates in New

Deck Master tank monitoring systems com- plied with emerging federal and state regula- tions. Barges so-equipped could be expected to pass the anticipated Coast Guard inspections requiring gage redundancy, independence of overfill alarms and on-deck visibility, etc. The gaging system was designed to enhance efficiency and safety during cargo transfers by providing better data, appropriately displayed and self- checked. Barge managers soon learned that the equipment not only reduced the possibility of spills, but also cut the time and cost of transfer operations.

In August 1990, a second major operator of integrated tug-barge systems in the mid-Atlantic approached Metritape to equip more than a dozen of its tank barges.

The mandated vapor recovery systems were being installed, essentially on schedule by termi- nal and vessel operators in New Jersey. These systems were complex, and introduced new train- ing, technological and safety concerns for crews engaged in cargo transfers. Top level teams of experts put the finishing touches on new equip- ment and conducted the first tests and demon- strations for terminal and barge crews. Piping, flanging and signaling equipment appeared com- plex and crews were slow to adopt certain of the new requirements. Long-standing safe operating procedures needed modification as had been pre- dicted by marine experts a decade before.

New Jersey officials altered the compliance schedule and provided extensions for the phase- in process.

Work began for one of these fleets in November 1990 and the other in January 1991. As the first systems became operational, crews soon appreci- ated the improved cargo monitoring features.

Along the Gulf Coast, Louisiana was seen to be leading the way in 1990. It had drafted regula- tions similar in some respects to those in New

Jersey and in California. Several barge operators with activities in the Gulf were in touch with

Metritape and were contemplating Deck Master.

Guard inspections appeared to be deferred until the mid-90s. Only two or three Gulf barge opera- tors have proceeded to order new gaging systems which will meet requirements for closed tank gaging, independent high alarm, and on-deck monitoring capacity such as that offered by Deck

For free literature on the new Deck Master gaging system from Metritape,

WATERCOM's lowest nightly rates now begin at 8 p.m. and stay that until 5 a.m. ET. Direct-dial calls placed at those times are $1 for the first minute and only 50

Saturdays, Sundays and holidays. Now save the most on personal calls even earlier in the evening.

Call collect or charge to your Bell System calling card, Visa, MasterCard or

American Express. You'll get the convenient service, featuring the ease, speed, privacy and clarity you've come to expect, from

WATERCOM. And with the nighttime rate now starting at 8 p.m., it's more convenient and a better bargain than ever to send facsimiles and business reports after office hours.

WATERCOM - It's the best bet on the river.

WATERCOM® and Quality at Your

Fingertips 111 are trademarks of Waterway

TELECOMMUNCATIONS FOR VESSELS AND SHORE.