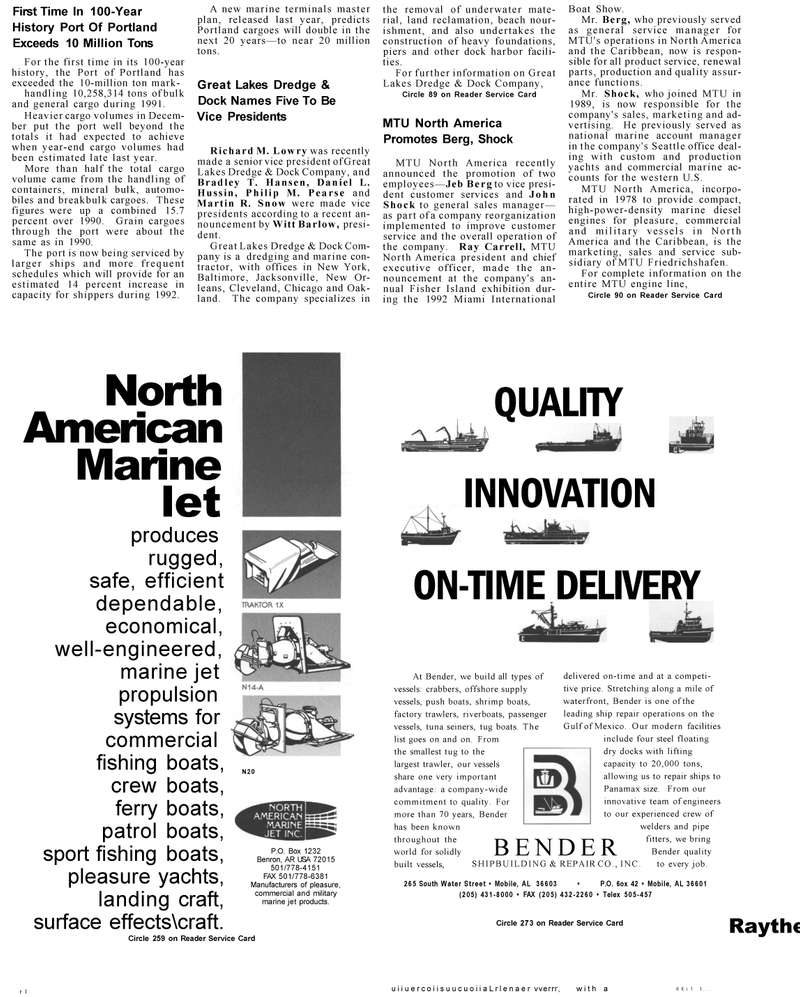 Heavier cargo volumes in Decem- ber put the port well beyond the totals it had expected to achieve when year-end cargo volumes had been estimated late last year.

More than half the total cargo volume came from the handling of containers, mineral bulk, automo- biles and breakbulk cargoes. These figures were up a combined 15.7 percent over 1990. Grain cargoes through the port were about the same as in 1990.

The port is now being serviced by larger ships and more frequent schedules which will provide for an estimated 14 percent increase in capacity for shippers during 1992.

Portland cargoes will double in the next 20 years—to near 20 million tons.

Dock Names Five To Be

Richard M. Lowry was recently made a senior vice president of Great

Martin R. Snow were made vice presidents according to a recent an- nouncement by Witt Barlow, presi- dent.

For further information on Great

Shock to general sales manager— as part of a company reorganization implemented to improve customer service and the overall operation of the company. Ray Carrell, MTU

North America president and chief executive officer, made the an- nouncement at the company's an- nual Fisher Island exhibition dur- ing the 1992 Miami International

Mr. Berg, who previously served as general service manager for

Mr. Shock, who joined MTU in 1989, is now responsible for the company's sales, marketing and ad- vertising. He previously served as national marine account manager in the company's Seattle office deal- ing with custom and production yachts and commercial marine ac- counts for the western U.S.

America and the Caribbean, is the marketing, sales and service sub- sidiary of MTU Friedrichshafen.

For complete information on the entire MTU engine line,

At Bender, we build all types of vessels: crabbers, offshore supply vessels, push boats, shrimp boats, factory trawlers, riverboats, passenger vessels, tuna seiners, tug boats. The list goes on and on. From the smallest tug to the largest trawler, our vessels share one very important advantage: a company-wide commitment to quality. For more than 70 years, Bender has been known throughout the world for solidly built vessels, delivered on-time and at a competi- tive price. Stretching along a mile of waterfront, Bender is one of the leading ship repair operations on the

Gulf of Mexico. Our modern facilities include four steel floating dry docks with lifting capacity to 20,000 tons, allowing us to repair ships to

Panamax size. From our innovative team of engineers to our experienced crew of welders and pipe fitters, we bring