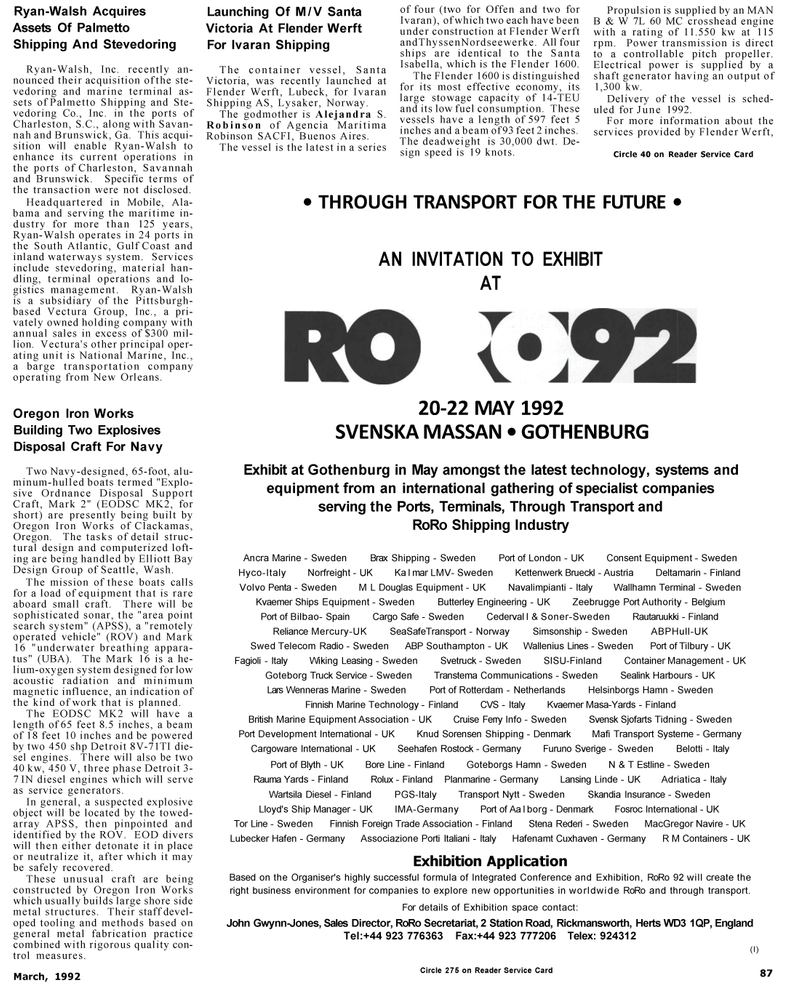 Ryan-Walsh, Inc. recently an- nounced their acquisition of the ste- vedoring and marine terminal as- sets of Palmetto Shipping and Ste- vedoring Co., Inc. in the ports of

Headquartered in Mobile, Ala- bama and serving the maritime in- dustry for more than 125 years,

Craft, Mark 2" (EODSC MK2, for short) are presently being built by

Oregon. The tasks of detail struc- tural design and computerized loft- ing are being handled by Elliott Bay

The mission of these boats calls for a load of equipment that is rare aboard small craft. There will be sophisticated sonar, the "area point search system" (APSS), a "remotely operated vehicle" (ROV) and Mark 16 "underwater breathing appara- tus" (UBA). The Mark 16 is a he- lium-oxygen system designed for low acoustic radiation and minimum magnetic influence, an indication of the kind of work that is planned.

In general, a suspected explosive object will be located by the towed- array APSS, then pinpointed and identified by the ROV. EOD divers will then either detonate it in place or neutralize it, after which it may be safely recovered.

Victoria, was recently launched at

The godmother is Alejandra S.

Ivaran), of which two each have been under construction at Flender Werft andThyssenNordseewerke. All four ships are identical to the Santa

The Flender 1600 is distinguished for its most effective economy, its large stowage capacity of 14-TEU and its low fuel consumption. These vessels have a length of 597 feet 5 inches and a beam of 93 feet 2 inches.

Propulsion is supplied by an MAN

B & W 7L 60 MC crosshead engine with a rating of 11.550 kw at 115 rpm. Power transmission is direct to a controllable pitch propeller.

Electrical power is supplied by a shaft generator having an output of 1,300 kw.

Delivery of the vessel is sched- uled for June 1992.

For more information about the services provided by Flender Werft,

Circle 40 on Reader Service Card • THROUGH TRANSPORT FOR THE FUTURE •

AN INVITATION TO EXHIBIT

Exhibit at Gothenburg in May amongst the latest technology, systems and equipment from an international gathering of specialist companies serving the Ports, Terminals, Through Transport and

Based on the Organiser's highly successful formula of Integrated Conference and Exhibition, RoRo 92 will create the right business environment for companies to explore new opportunities in worldwide RoRo and through transport.