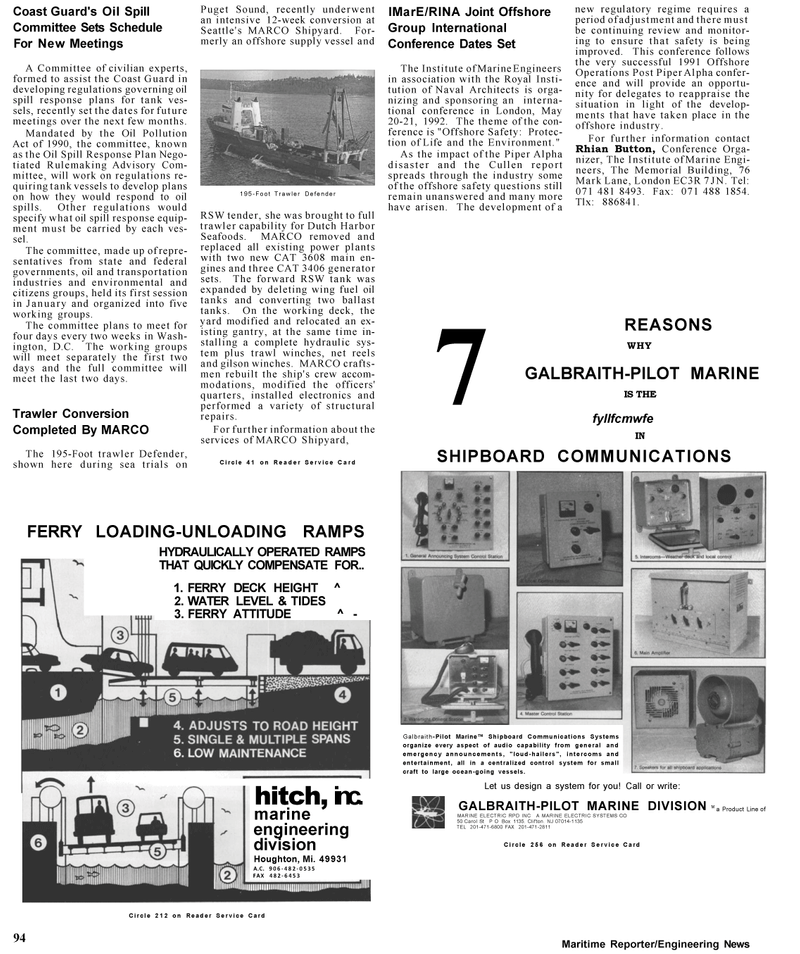 A Committee of civilian experts, formed to assist the Coast Guard in developing regulations governing oil spill response plans for tank ves- sels, recently set the dates for future meetings over the next few months.

Mandated by the Oil Pollution

Act of 1990, the committee, known as the Oil Spill Response Plan Nego- tiated Rulemaking Advisory Com- mittee, will work on regulations re- quiring tank vessels to develop plans on how they would respond to oil spills. Other regulations would specify what oil spill response equip- ment must be carried by each ves- sel.

The committee, made up of repre- sentatives from state and federal governments, oil and transportation industries and environmental and citizens groups, held its first session in January and organized into five working groups.

The committee plans to meet for four days every two weeks in Wash- ington, D.C. The working groups will meet separately the first two days and the full committee will meet the last two days.

The 195-Foot trawler Defender, shown here during sea trials on

RSW tender, she was brought to full trawler capability for Dutch Harbor

For further information about the services of MARCO Shipyard,

The Institute of Marine Engineers in association with the Royal Insti- tution of Naval Architects is orga- nizing and sponsoring an interna- tional conference in London, May 20-21, 1992. The theme of the con- ference is "Offshore Safety: Protec- tion of Life and the Environment."

As the impact of the Piper Alpha disaster and the Cullen report spreads through the industry some of the offshore safety questions still remain unanswered and many more have arisen. The development of a new regulatory regime requires a period of adjustment and there must be continuing review and monitor- ing to ensure that safety is being improved. This conference follows the very successful 1991 Offshore

Operations Post Piper Alpha confer- ence and will provide an opportu- nity for delegates to reappraise the situation in light of the develop- ments that have taken place in the offshore industry.

Galbraith-Pilot Marine™ Shipboard Communications Systems organize every aspect of audio capability from general and emergency announcements, "loud-hailers", intercoms and entertainment, all in a centralized control system for small craft to large ocean-going vessels.

Let us design a system for you! Call or write: