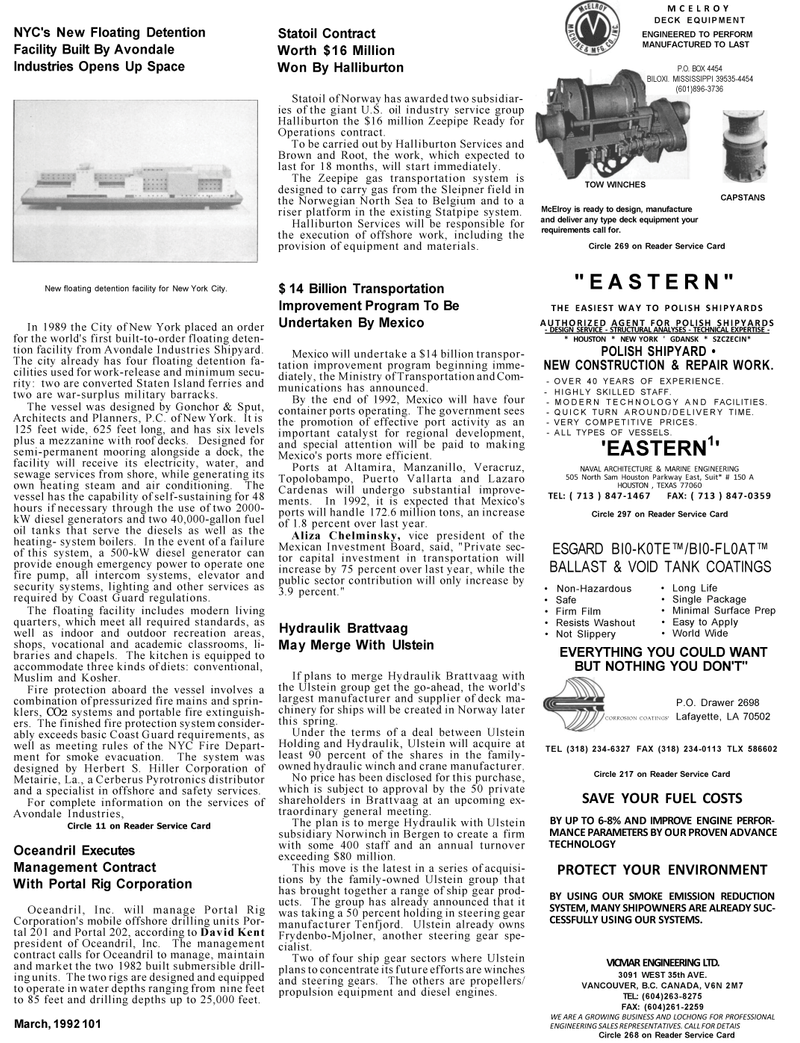 In 1989 the City of New York placed an order for the world's first built-to-order floating deten- tion facility from Avondale Industries Shipyard.

The vessel was designed by Gonchor & Sput,

Architects and Planners, P.C. of New York. It is 125 feet wide, 625 feet long, and has six levels plus a mezzanine with roof decks. Designed for semi-permanent mooring alongside a dock, the facility will receive its electricity, water, and sewage services from shore, while generating its own heating steam and air conditioning. The vessel has the capability of self-sustaining for 48 hours if necessary through the use of two 2000- kW diesel generators and two 40,000-gallon fuel oil tanks that serve the diesels as well as the heating- system boilers. In the event of a failure of this system, a 500-kW diesel generator can provide enough emergency power to operate one fire pump, all intercom systems, elevator and security systems, lighting and other services as required by Coast Guard regulations.

The floating facility includes modern living quarters, which meet all required standards, as well as indoor and outdoor recreation areas, shops, vocational and academic classrooms, li- braries and chapels. The kitchen is equipped to accommodate three kinds of diets: conventional,

Metairie, La., a Cerberus Pyrotronics distributor and a specialist in offshore and safety services.

For complete information on the services of

Corporation's mobile offshore drilling units Por- tal 201 and Portal 202, according to David Kent president of Oceandril, Inc. The management contract calls for Oceandril to manage, maintain and market the two 1982 built submersible drill- ing units. The two rigs are designed and equipped to operate in water depths ranging from nine feet to 85 feet and drilling depths up to 25,000 feet.

Halliburton the $16 million Zeepipe Ready for

To be carried out by Halliburton Services and

Brown and Root, the work, which expected to last for 18 months, will start immediately.

The Zeepipe gas transportation system is designed to carry gas from the Sleipner field in the Norwegian North Sea to Belgium and to a riser platform in the existing Statpipe system.

Halliburton Services will be responsible for the execution of offshore work, including the provision of equipment and materials. $ 14 Billion Transportation

Improvement Program To Be

By the end of 1992, Mexico will have four container ports operating. The government sees the promotion of effective port activity as an important catalyst for regional development, and special attention will be paid to making

Cardenas will undergo substantial improve- ments. In 1992, it is expected that Mexico's ports will handle 172.6 million tons, an increase of 1.8 percent over last year.

Aliza Chelminsky, vice president of the

Mexican Investment Board, said, "Private sec- tor capital investment in transportation will increase by 75 percent over last year, while the public sector contribution will only increase by 3.9 percent."

May Merge With Ulstein

If plans to merge Hydraulik Brattvaag with the Ulstein group get the go-ahead, the world's largest manufacturer and supplier of deck ma- chinery for ships will be created in Norway later this spring.

Holding and Hydraulik, Ulstein will acquire at least 90 percent of the shares in the family- owned hydraulic winch and crane manufacturer.

No price has been disclosed for this purchase, which is subject to approval by the 50 private shareholders in Brattvaag at an upcoming ex- traordinary general meeting.

The plan is to merge Hydraulik with Ulstein subsidiary Norwinch in Bergen to create a firm with some 400 staff and an annual turnover exceeding $80 million.

This move is the latest in a series of acquisi- tions by the family-owned Ulstein group that has brought together a range of ship gear prod- ucts. The group has already announced that it was taking a 50 percent holding in steering gear manufacturer Tenfjord. Ulstein already owns

Two of four ship gear sectors where Ulstein plans to concentrate its future efforts are winches and steering gears. The others are propellers/ propulsion equipment and diesel engines.

McElroy is ready to design, manufacture and deliver any type deck equipment your requirements call for.

THE EASIEST WAY TO POLISH SHIPYARDS

EVERYTHING YOU COULD WANT

BUT NOTHING YOU DON'T"

SAVE YOUR FUEL COSTS

BY UP TO 6-8% AND IMPROVE ENGINE PERFOR-

MANCE PARAMETERS BY OUR PROVEN ADVANCE

BY USING OUR SMOKE EMISSION REDUCTION

SYSTEM, MANY SHIPOWNERS ARE ALREADY SUC-

WE ARE A GROWING BUSINESS AND LOCHONG FOR PROFESSIONAL