U.S. Cruise Ships Poised To Sail To Havana Should Castro Be Ousted

Should the Castro government fall, industry experts say U.S.-based cruise ships that have had to sail around Cuba for the past 30 years would be among the first symbols of capitalism to return to the island.

There would be no need to wait for Cuba to rebuild its antiquated hotels, communications and infrastructure, since the luxurious oceangoing ships stock their own food, water and supplies. Vans and automobiles could be carried aboard many of the big ships for tourists to use as ground transportation on the island.

According to one projection, as many as 2.4 million passengers could disembark annually in Cuba within 10 years of a change in its communist government. The figure includes about 600,000 passengers traveling from Miami to Havana aboard eightstory high-speed ferries, much like those used in Europe.

Contingency plans for entering the Cuban market have already been prepared by many major U.S.-based cruise ship lines.

Cuba is reeling from the dismantling of its former key trading partner, the Soviet Union, and tourists from Europe and Canada remain important contributors to the Cuban economy.

Cuba, which has a population of about 10 million, is in the middle of the world's most popular cruising waters. 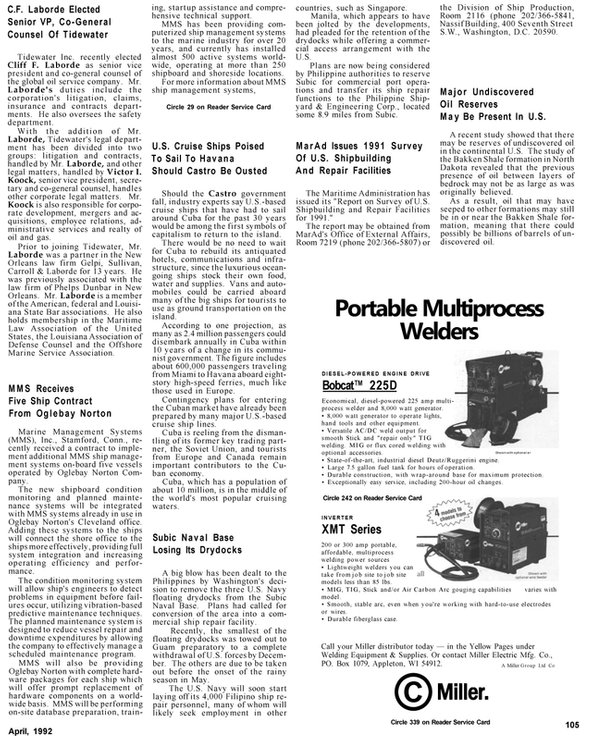 Read U.S. Cruise Ships Poised To Sail To Havana Should Castro Be Ousted in Pdf, Flash or Html5 edition of April 1992 Maritime Reporter