Magnavox recently received orders from the U.S. Coast Guard for differential GPS (DGPS) equipment which will be used to provide enhanced navigational accuracy for ships and boats in U.S. coastal waters and harbors.

The Magnavox system uses the signals from marine radiobeacons to broadcast differential data which can be used by shipboard GPS receivers to offset errors in the GPS satellites' navigational signals. The DGPS data is "piggy-backed" on the regular direction-finding/homing signals broadcast by the beacons.

Magnavox has already supplied differential GPS beacon systems, which have been installed by the Coast Guard at St. Mary's River, Mich., and Wildwood, N.J. Similar systems will be installed at other East Coast and Gulf Coast beacon sites in early 1992.

Magnavox has been a pioneer in the development of beacon-based differential GPS technology. Last year, the company installed the world's first public broadcast DGPS beacon system in the Baltic Sea, under contract from Swedish and Finnish navigation authorities.

According to Steve Wilson of Magnavox, the use of differential techniques can improve navigational accuracy of GPS dramatically.

The Coast Guard plans to make the DGPS broadcasts freely available to the public. To take advantage of the system, a ship or boat will only need a beacon receiver, which can demodulate the DGPS data and provide it to a GPS receiver capable of accepting and applying differential corrections.

Current Coast Guard plans call for expansion of experimental DGPS broadcasts to cover the entire East Coast from Maine to Cape Hatteras with five to six additional beacon sites during 1992. Magnavox has also supplied similar systems to Denmark, the Netherlands, Canada and the United Kingdom.

For more information about the GPS equipment provided by Magnavox, Circle 95 on Reader Service Card 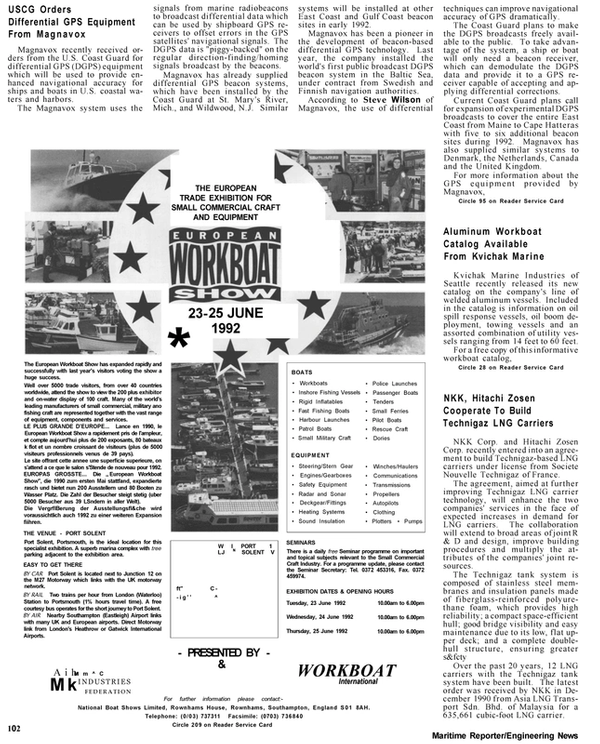