How The Oil Industry Did Financially In 1991

— Prospects For The Future — The oil industry had a disappointing year in 1991—the combined profits of the leading 20 oil companies were more than 20 percent belowthe income earned in 1990. Total sales of the oil companies in 1991 fell by more than four percent—the first time sales have fallen since 1986. The oil industry has been hurt by the recession, as consumers bought less gasoline and depressed industries reduced their demand for other petroleum products and petrochemicals.

In 1991, the profitability of the industry fell to a 9.8 percent return on stockholders' equity, or only a 3.2 percent return on total sales (see Fig. 1). However, the worldwide profitability of U.S. oil companies masks the extremely low earnings they've been able to achieve here in the United States. The low rate of return in the United States is largely due to a poor investment climate for exploration and development: • Political and regulatory restrictions are limiting access to the most promising lands for exploration, • The political risk has increased even if oil or gas is discovered, because production could be halted or constrained by regulation, reducing the value of the find, and • Tax law in the United States is not as favorable to industry as tax laws in many other countries.

In 1990, for the first time, over half of the exploration and production spending of U.S. oil companies went toward developing new oil and gas resources outside the United States.

Oil Company 1991 Financial Results API aggregates the financial results for 20 leading oil companies to give a picture of industry trends.

Oil Companies Did Marginally Better Than Non-Oil Companies The poor performance of the oil industry looks only slightly better when compared with the financial beating taken by the nation's other manufacturing companies in 1991 as a result of the recession. The net income of 100 leading non-oil companies tracked by API plummented by 59.7 percent in 1991 from 1990s level. In just the fourth quarter of 1991, their net income fell by 72.4 percent from the same quarter one year earlier.

Low Domestic Earnings Key To Poor Oil Industry Performance Looking at a more detailed breakdown of the operating earnings of the 20 U.S. oil companies reveals some very important trends. Although many of these companies have important chemical, coal and other energy operations, the petroleum sectors of exploration, production, refining, marketing and trans- portation are their core businesses.

The worldwide petroleum sector earnings of the 20 U.S. oil companies declined by 19.9 percent from 1990 to 1991. Within that, domestic petroleum earnings fell 35.5 percent, whereas earnings from the foreign petroleum operations of U.S.

Overseas Investment As Much As Five Times More Profitable Several factors are responsible for this shift. One reason is that other countries, particularly those in Europe and the Far East, havenotbeen hit as hard by the current recession as the United States. As a result, refining and marketing (downstream) earnings have held up better overseas than in the United States.

Probably a more important trend, however, is the declining profitability of U.S. domestic exploration and production (upstream) investments.

Investment Overseas Will Mean Fewer U.S. Jobs In response, U.S. oil companies are being forced to look for their future abroad. The facts are that: • The foreign exploration and development expenditures ofU.S. companies have nearly doubled since 1986, growing from less than 30 percent of worldwide spending in the mid-1980s to over 50 percent in 1990.

Because of a variety of circumstances, primarily economic and government policies, the American petroleum industry has been forced to curtail its domestic operations.

As a result, over the past ten years the industry has lost 326,000jobs, or 17 percent of total employment.

The exploration and development sector of the petroleum industry has been hit the hardest—with 300,000 jobs lost from 1981 to 1991, a falloff of over 40 percent.

On March 2, 1992, an article in The New York Times addressed the issue: "Many industry executives and financial analysts said that the tally of jobs pared from oil and gas production in the United States since the peak month of the last drilling boom, January 1982, could exceed 400,000 by the end of this year, far more than the number lost in the same period in the American auto industry." One seemingly lost opportunity to create needed jobs and develop important energy resources is the development of the coastal plain of the Arctic National Wildlife Refuge (ANWR). While oil exploration and development would leave a footprint the size of Dulles Airport in a frozen tract the size of South Carolina, ANWR operations at their peak level could create as many as 735,000jobs across the United States. These potential jobs —now apparently lost— would have provided work in exploration, development, transportation, refining, equipment manufacturing, and indirect support industries in all 50 states.

Without an improvement in the investment climate in the United States, the trend toward overseas investment is unlikely to be reversed. 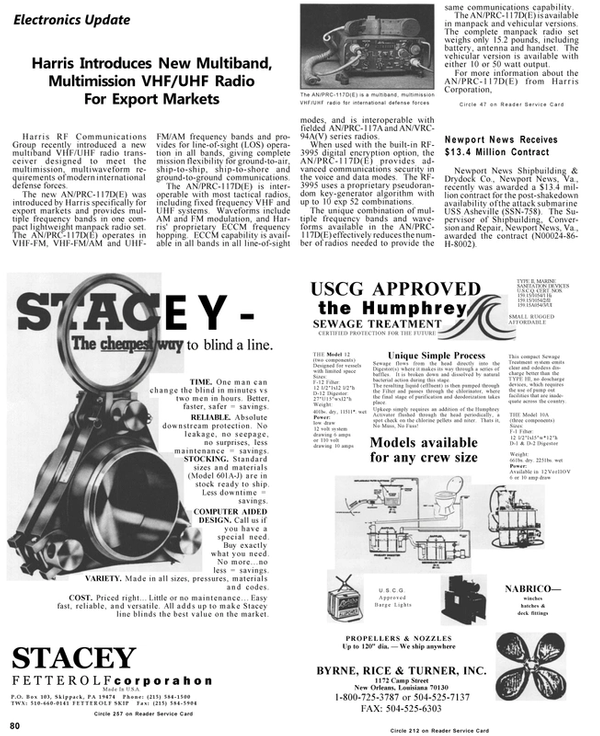 Read How The Oil Industry Did Financially In 1991 in Pdf, Flash or Html5 edition of April 1992 Maritime Reporter