Ecomarine USA recently introduced its ECO- 100 multipurpose, pollution-control vessel— reportedly the first craft of its kind in the United States.

"We designed the ECO-100 to be the most efficient oil spill recovery vessel in the world," said William S. Doyle, Ecomarine managing director.

The 45-foot ECO-lOO boat, also known as the Pelican, uses revolutionary technology that sepa- rates hydrocarbons from water at a reported 98 percent efficiency.

Ecomarine officials point to the vessel's compact design as a very important attribute when responding to oil spills, chemical leaks or other types of environmental emergencies. In optimal conditions, Ecomarine says the vessel can recover up to 4,000 gallons an hour, or nearly 15 tons. When the use of chemical dispersants is indicated, the Pelican provides an effective method of application. With a draft of less than three feet, it can maneuver virtually up to the shoreline. Due to its relatively light weight and compact design, the Pelican can be easily transported to distant spill sites by air or highways without the requirement of special wide load authorization.

The craft is also equipped with the ECOBOSS, a high-tech tow fish computer system with an underwater probe that can instantly provide a "weather map" of pollution spreading in a body of water.

The following are some other interesting features of the ECO-lOO: • The front of the boat opens up like a set of wide jaws and the engine creates a powerful suction to vacuum in floating and semisubmerged debris.

• Uses a water cannon for blasting dirt or grime from shorelines and harbors, or for fighting boat or dockside fires.

• Its oxygenation system eliminates smells from decaying algae and restores healthy oxygen levels in the water Since the vessel offers many advantages to those responsible for cleaning up the marine environment, more than 100 Ecomarine Pelicans are currently in operation in Italy, France, Spain and Portugal.

For more information about the ECO-lOO, Circle 54 on Reader Service Card 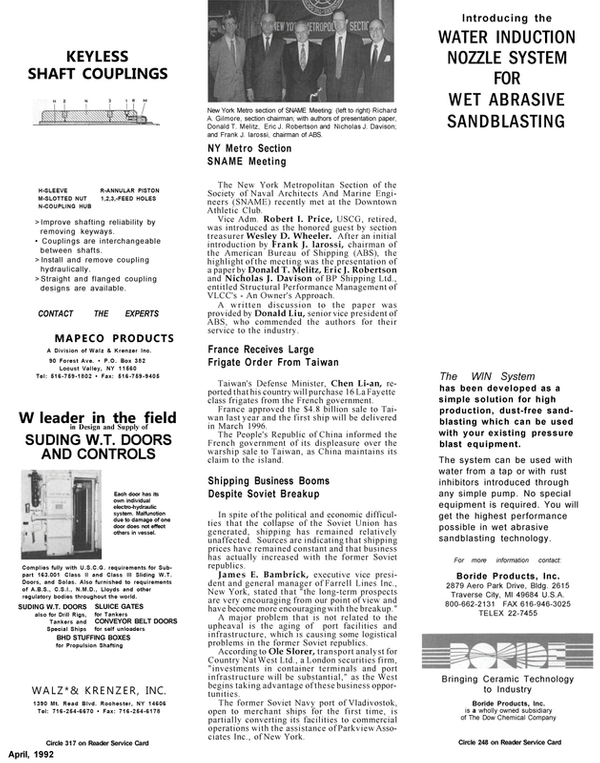