Ishikawajima-Harima Heavy Industries Co., Ltd. (IHI) of Tokyo, Japan, received an order early last September from Idemitsu Tanker Co., Ltd. to build a 253,923-dwt VLCC which will be equipped with IHI's contrarotating propeller (CRP) system. The ship, to be the first IHI VLCC to have a CRP, is scheduled to be commissioned in August 1993 and will engage mainly in the shuttling service between Japan and the Middle East for Idemitsu Kosan Co., Ltd.

In 1980, IHI started an R&D program for CRP systems for large merchant vessels, based on its longstanding research on propeller, shaftings, gear systems and experimental tank techniques. The efforts reached a high point in 1987 with a retrofit project on the existing 36,415-dwt bulk carrier, Juno, using a design developed for this purpose.

Juno underwent sea trials in December of 1988 to establish her performance as a conventional propeller ship. The retrofitting of the IHI CRP system was carried out in January of 1989.

Immediately after the retrofit, Juno, reborn as a CRP ship, underwent another series of sea trials which demonstrated the efficiency of the IHI CRP system. The trials showed a power savings of up to 15 percent compared to the conventional propeller performance. The results of these tests were reported at the 1990 annual meeting of the Society of Naval Architects and Marine Engineers (SNAME).

Juno has already spent three years of profitable and trouble-free services as a CRP ship. It is expected that the same level of performance success will be realized with the new VLCC installation. 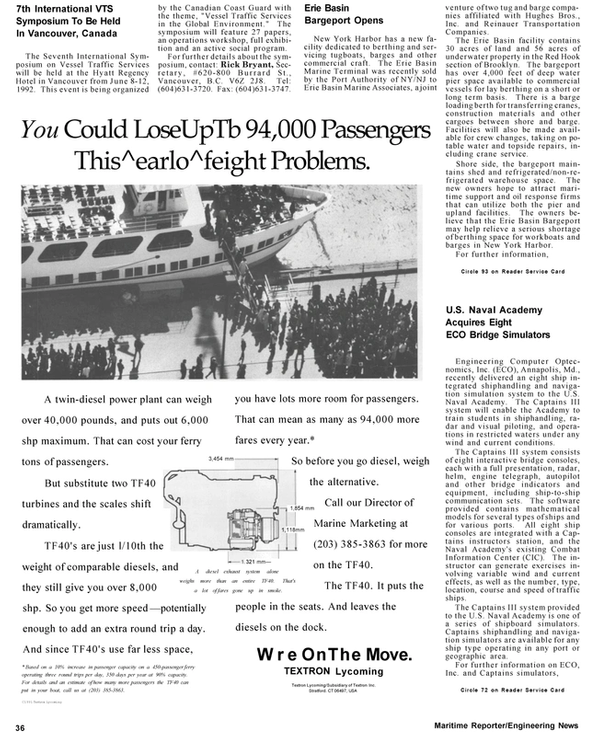 Read IHI's Contra rotating Propeller To Be Installed On VLCC Scheduled For Commissioning In 1993 in Pdf, Flash or Html5 edition of April 1992 Maritime Reporter