HDW's Design For Double-Hull Tanker To Be European Standard

In the wake of an International Maritime Organization (IMO) ruling that tankers over 5,000 dwt must have full double bottoms and wing tanks, a double-hull design from Howaldtswerke-Deutsche Werft (HDW) has been chosen by European shipyards as their building standard.

Because a Marpol convention amendment also grants equivalency to mid-deck height tankers with double-sided hulls, the yards have also made an option available for an intermediate-deck type available from the French yard of Chantiers de l'Atlantique.

Known as the "E3" or "Ecological, Economical, European" project, all five yards contributed to the enterprise, with HDW carrying out the naval architecture aspects and CA coordinated the structural design work. None of the yards involved in the E3 project will pay a license fee, but they will each retain individual control over sales and marketing activities The HDW-designed 280,000-dwt VLCC calls for a 4 meter (13.12 feet) double bottom and two longitudinal bulkheads in the cargo section.

The more flexible CA design incorporates a 6 meter (19.7 feet) spacing between inner and outer shells, with the intermediate subdivision being described as a "low mid-deck." The advantage of this arrangement is that when operating in areas where the U.S. Oil Pollution Act is in effect, the 6 meter double bottom becomes a void space, while in other waters it becomes an oil carrying tank space.

HDW was the project leader in the German government's "Ship of the Future" program, and is currently working on advanced design proposals for the cruise shipping and liquefied hydrogen transportation sectors.

For further information regarding the facilities available at HDW, or details on the shipyard's new double- hull tanker design, Circle 104 on Reader Service Card 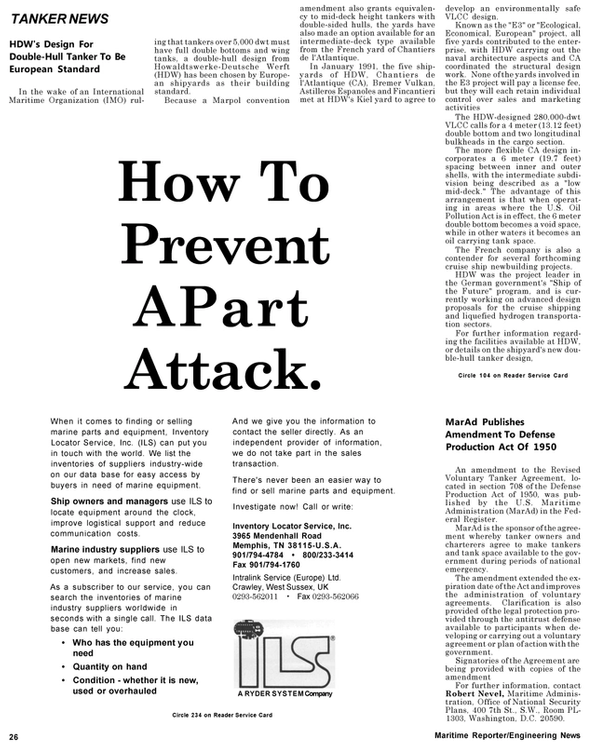 Read HDW's Design For Double-Hull Tanker To Be European Standard in Pdf, Flash or Html5 edition of May 1992 Maritime Reporter