The Navy, MarAd, And RRF Deactivations

With the completion of operations in the Persian Gulf, the ships of the Ready Reserve Fleet (RRF), which had supported the lift of material to the operations area, are returning and will need to be deactivated. This deactivation is critically important since the proper layup of these ships will make it easier to mobilize them in the event that we need them in the future.

Normally, the Maritime Administration (MarAd) would compete that work among private shipyards and award the contracts to the most competitive bidder among the interested yards. The result of such bidding activity is that the shipyards get an opportunity to participate in a project that generates much needed workload, while the U.S. Government obtains repair services that are essential for national defense at a cost savings for the taxpayer.

But language in last year's Dire Supplemental Bill, used to finance the Persian Gulf operation, clearly indicates that some old, bad habits die hard. In the Supplemental, there was report language that directed the Navy/ MarAd to allocate 50 percent of all deactivations to public sector shipyards. Notice that the tried and true word "competition" is nowhere to be seen. Since the Administration claims to believe that competition is vital in the development of markets, it is amazing that this report language is not only being adhered to, it is being slavishly followed, although there is no statutory requirement mandating such a division of work.

The Maritime Administration is planning to perform 81 deactivations. Initially, the industry had been informed that perhaps 3 or 4 availabilities would be assigned to the Charleston Navy Yard. Now, however, because of political pressure, as many as 21 deactivations may go to the Navy yards, with 13 planned for Charleston, 6 for Philadelphia (a facility that is on the 1991 Base Closure List), and 2 for a West Coast Navy yard. The reader should be aware that we are talking about allocations, not contracts awarded as a result of competition.

In point of fact, the real scandal has to do with the fact that the Navy yards are not even expected to meet what the Maritime Administration believes will be the cost to perform the deactivation in the most competitive shipyard.

The procedure follows a path that suggests the days of smoke-filled rooms and back-door deals are not over: MarAd prepares a list of expected deactivations and the scheduled dates for those availabilities. The list is provided to the Naval Sea Systems Command (NAVSEA, Code 072).

The Command identifies those ships that it wants. Then MarAd provides NAVSEA with the specification of work to be performed. If the Navy cost estimate is within 30 percent of the estimated cost to complete the job, the contract is awarded to the Navy yard. There is no competition, no pre-award survey to see if the yard is capable of performing the work, no post-performance audit to see if the Navy yard has properly charged its costs.

The amazed reader might ask, "How did the Maritime Administration determine that a 30 percent differential is acceptable?" The analysis that was performed was limited to one direct competition between public and private sectors for the first deactivation availability for the SS Cape Canaveral. In that competition, which was conducted in September 1991, the low bidder was determined to be Stevens Tech of Norfolk, Va. The winning bid was $946,000. The bid from the Charleston Navy Yard was $1,223,000.

This result has essentially "baselined" the remaining deactivations.

While it is true that there were other private yards that bid on this job (including some that offered higher bids than did Charleston), the fact of the matter is that the Maritime Administration had no idea what constituted the quality of the Navy yard bid. In other publicprivate competitions, there are strict rules for bidding and cost comparability that are followed.

This was clearly not the case in the September 1991 bid.

In fact, the befuddled reader should understand that the Maritime Administration is really caught between a rock and a hard place. On the one hand, MarAd is responsible for maintaining the Ready Reserve Fleet, but on the other hand, the purse strings Eire held by the Navy. The old hackneyed Pentagon rubric of the Golden Rule clearly applies, "He who has the gold rules." The bottom line is that the nation's private ship repair sector has to compete against not only subsidized foreign yards in Japan, Germany, and the European Community, but also against subsidized yards from the public sector.

Only in ship repair do we see a Republican Administration abandon its free market principles to reward a defense arsenal structure that is more reminiscent of the 1890s, rather than that of the 1990s. If socialism has been rejected in the Commonwealth of Independent States, why does it hang on in the Naval Sea Systems Command?

Let competition decide where these jobs are to go. 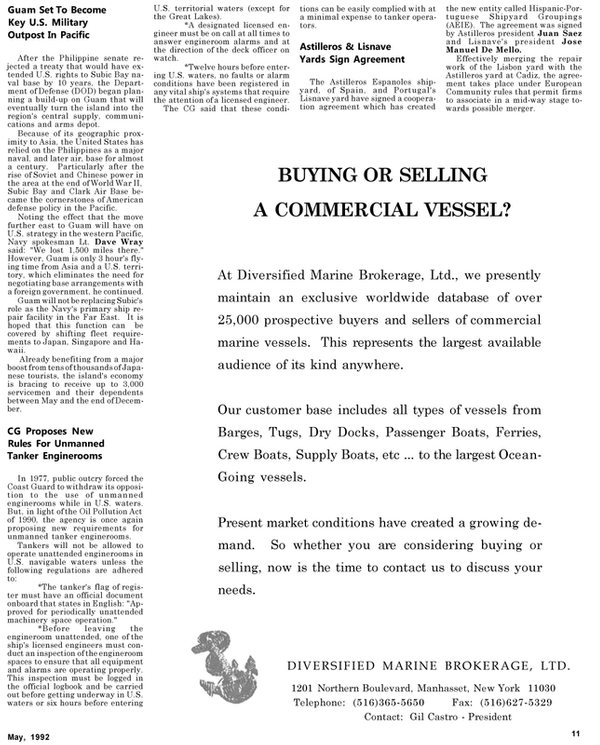 Read The Navy, MarAd, And RRF Deactivations in Pdf, Flash or Html5 edition of May 1992 Maritime Reporter