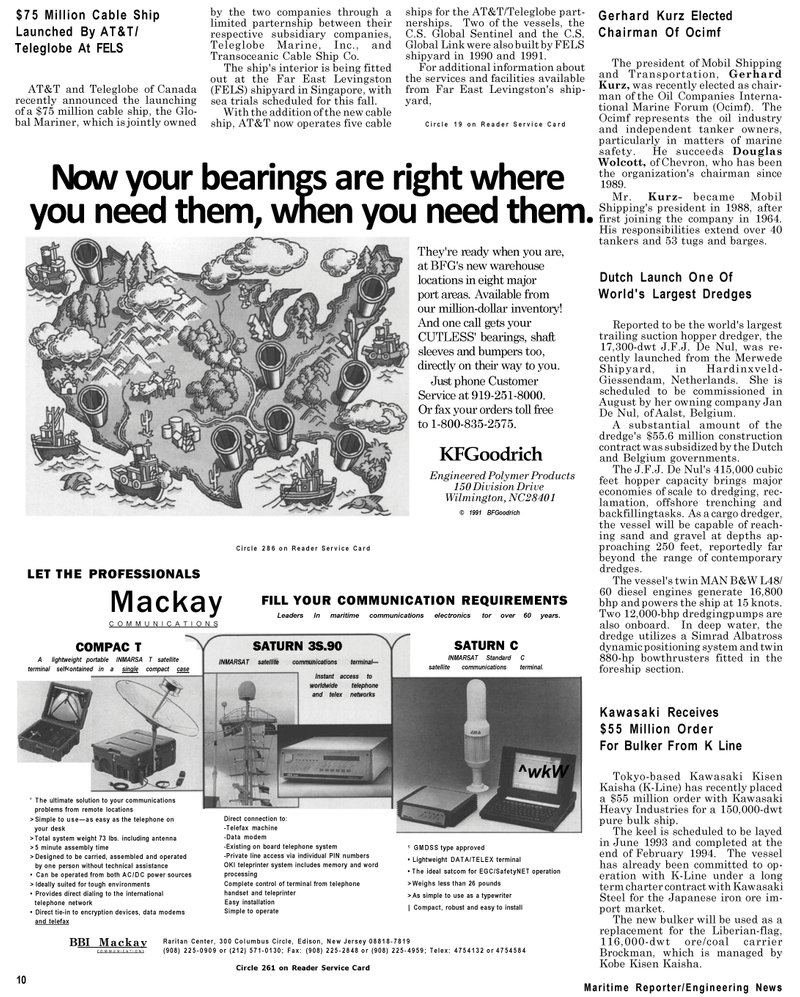 AT&T and Teleglobe of Canada recently announced the launching of a $75 million cable ship, the Glo- bal Mariner, which is jointly owned by the two companies through a limited parternship between their respective subsidiary companies,

The ship's interior is being fitted out at the Far East Levingston (FELS) shipyard in Singapore, with sea trials scheduled for this fall.

With the addition of the new cable ship, AT&T now operates five cable

Circle 261 on Reader Service Card ships for the AT&T/Teleglobe part- nerships. Two of the vessels, the

C.S. Global Sentinel and the C.S.

For additional information about the services and facilities available from Far East Levingston's ship- yard,

The president of Mobil Shipping and Transportation, Gerhard

Wolcott, of Chevron, who has been the organization's chairman since 1989.

Shipping's president in 1988, after first joining the company in 1964.

His responsibilities extend over 40 tankers and 53 tugs and barges.

Dutch Launch One Of

Reported to be the world's largest trailing suction hopper dredger, the 17,300-dwt J.F.J. De Nul, was re- cently launched from the Merwede

Giessendam, Netherlands. She is scheduled to be commissioned in

August by her owning company Jan

A substantial amount of the dredge's $55.6 million construction contract was subsidized by the Dutch and Belgium governments.

The J.F.J. De Nul's 415,000 cubic feet hopper capacity brings major economies of scale to dredging, rec- lamation, offshore trenching and backfillingtasks. As a cargo dredger, the vessel will be capable of reach- ing sand and gravel at depths ap- proaching 250 feet, reportedly far beyond the range of contemporary dredges.

For Bulker From K Line

The keel is scheduled to be layed in June 1993 and completed at the end of February 1994. The vessel has already been committed to op- eration with K-Line under a long term charter contract with Kawasaki

The new bulker will be used as a replacement for the Liberian-flag, 116,000-dwt ore/coal carrier

Brockman, which is managed by

They're ready when you are, at BFG's new warehouse locations in eight major port areas. Available from our million-dollar inventory!

And one call gets your

CUTLESS' bearings, shaft sleeves and bumpers too, directly on their way to you.

Complete control of terminal from telephone handset and teleprinter

Simple to operate 1 GMDSS type approved • Lightweight DATA/TELEX terminal • The ideal satcom for EGC/SafetyNET operation > Weighs less than 26 pounds > As simple to use as a typewriter | Compact, robust and easy to install 10 Maritime Reporter/Engineering News