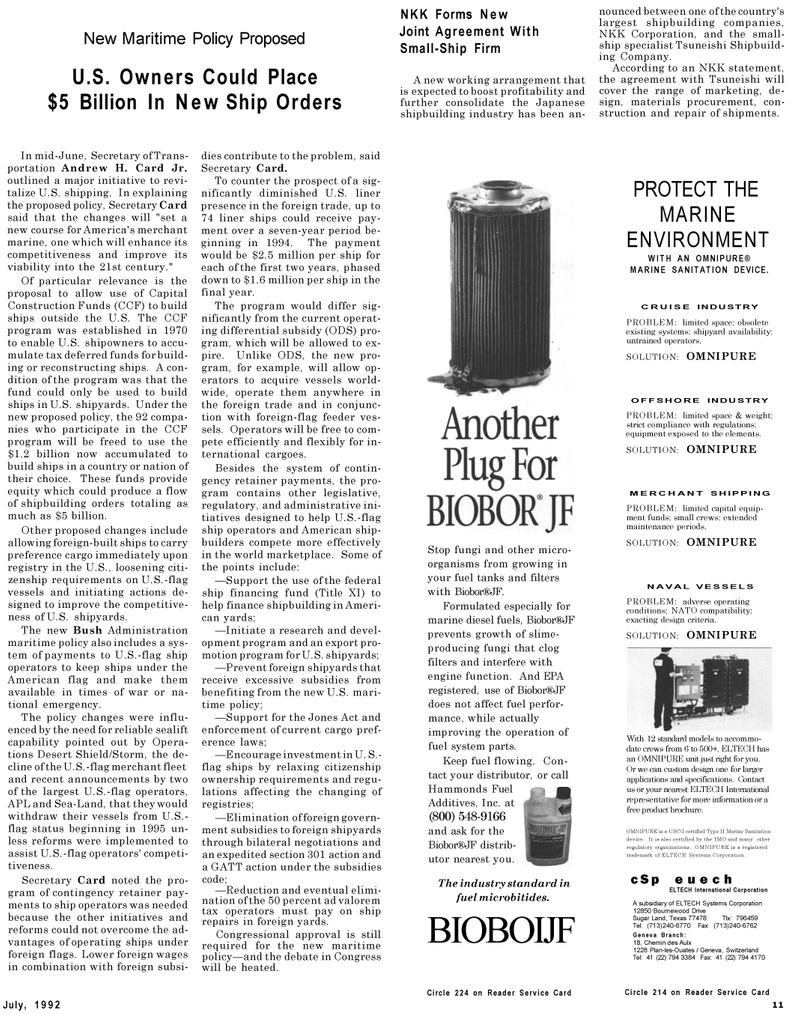 In mid-June, Secretary of Trans- portation Andrew H. Card Jr. outlined a major initiative to revi- talize U.S. shipping. In explaining the proposed policy, Secretary Card said that the changes will "set a new course for America's merchant marine, one which will enhance its competitiveness and improve its viability into the 21st century."

Of particular relevance is the proposal to allow use of Capital

Construction Funds (CCF) to build ships outside the U.S. The CCF program was established in 1970 to enable U.S. shipowners to accu- mulate tax deferred funds for build- ing or reconstructing ships. A con- dition of the program was that the fund could only be used to build ships in U.S. shipyards. Under the new proposed policy, the 92 compa- nies who participate in the CCF program will be freed to use the $1.2 billion now accumulated to build ships in a country or nation of their choice. These funds provide equity which could produce a flow of shipbuilding orders totaling as much as $5 billion.

The new Bush Administration maritime policy also includes a sys- tem of payments to U.S.-flag ship operators to keep ships under the

American flag and make them available in times of war or na- tional emergency.

The policy changes were influ- enced by the need for reliable sealift capability pointed out by Opera- tions Desert Shield/Storm, the de- cline of the U.S.-flag merchant fleet and recent announcements by two of the largest U.S.-flag operators,

APL and Sea-Land, that they would withdraw their vessels from U.S.- flag status beginning in 1995 un- less reforms were implemented to assist U.S.-flag operators' competi- tiveness.

Secretary Card noted the pro- gram of contingency retainer pay- ments to ship operators was needed because the other initiatives and reforms could not overcome the ad- vantages of operating ships under foreign flags. Lower foreign wages in combination with foreign subsi- dies contribute to the problem, said

To counter the prospect of a sig- nificantly diminished U.S. liner presence in the foreign trade, up to 74 liner ships could receive pay- ment over a seven-year period be- ginning in 1994. The payment would be $2.5 million per ship for each of the first two years, phased down to $1.6 million per ship in the final year.

The program would differ sig- nificantly from the current operat- ing differential subsidy (ODS) pro- gram, which will be allowed to ex- pire. Unlike ODS, the new pro- gram, for example, will allow op- erators to acquire vessels world- wide, operate them anywhere in the foreign trade and in conjunc- tion with foreign-flag feeder ves- sels. Operators will be free to com- pete efficiently and flexibly for in- ternational cargoes.

Besides the system of contin- gency retainer payments, the pro- gram contains other legislative, regulatory, and administrative ini- tiatives designed to help U.S.-flag ship operators and American ship- builders compete more effectively in the world marketplace. Some of the points include: —Support the use of the federal ship financing fund (Title XI) to help finance shipbuilding in Ameri- can yards; —Initiate a research and devel- opment program and an export pro- motion program for U.S. shipyards; —Prevent foreign shipyards that receive excessive subsidies from benefiting from the new U.S. mari- time policy; —Support for the Jones Act and enforcement of current cargo pref- erence laws; —Encourage investment in U. S.- flag ships by relaxing citizenship ownership requirements and regu- lations affecting the changing of registries; —Elimination of foreign govern- ment subsidies to foreign shipyards through bilateral negotiations and an expedited section 301 action and a GATT action under the subsidies code; —Reduction and eventual elimi- nation of the 50 percent ad valorem tax operators must pay on ship repairs in foreign yards.

Congressional approval is still required for the new maritime policy—and the debate in Congress will be heated.

A new working arrangement that is expected to boost profitability and further consolidate the Japanese shipbuilding industry has been an- nounced between one of the country's largest shipbuilding companies,

According to an NKK statement, the agreement with Tsuneishi will cover the range of marketing, de- sign, materials procurement, con- struction and repair of shipments.

Stop fungi and other micro- organisms from growing in your fuel tanks and filters with Biobor®JF.

Formulated especially for marine diesel fuels, Biobor®JF prevents growth of slime- producing fungi that clog filters and interfere with engine function. And EPA registered, use of Biobor®JF does not affect fuel perfor- mance, while actually improving the operation of fuel system parts.

The industry standard in fuel microbitides.

With 12 standard models to accommo- date crews from 6 to 500+, ELTECH has an OMNIPURE unit just right for you.

Or we can custom design one for larger applications and specifications. Contact us or your nearest ELTECH International representative for more information or a free product brochure.

OMNIPURE is a USCG certified Type II Marine Sanitation device. It is also certified by the IMO and many other regulatory organizations. OMNIPURE is a registered trademark of ELTECH Systems Corporation. cSp euech