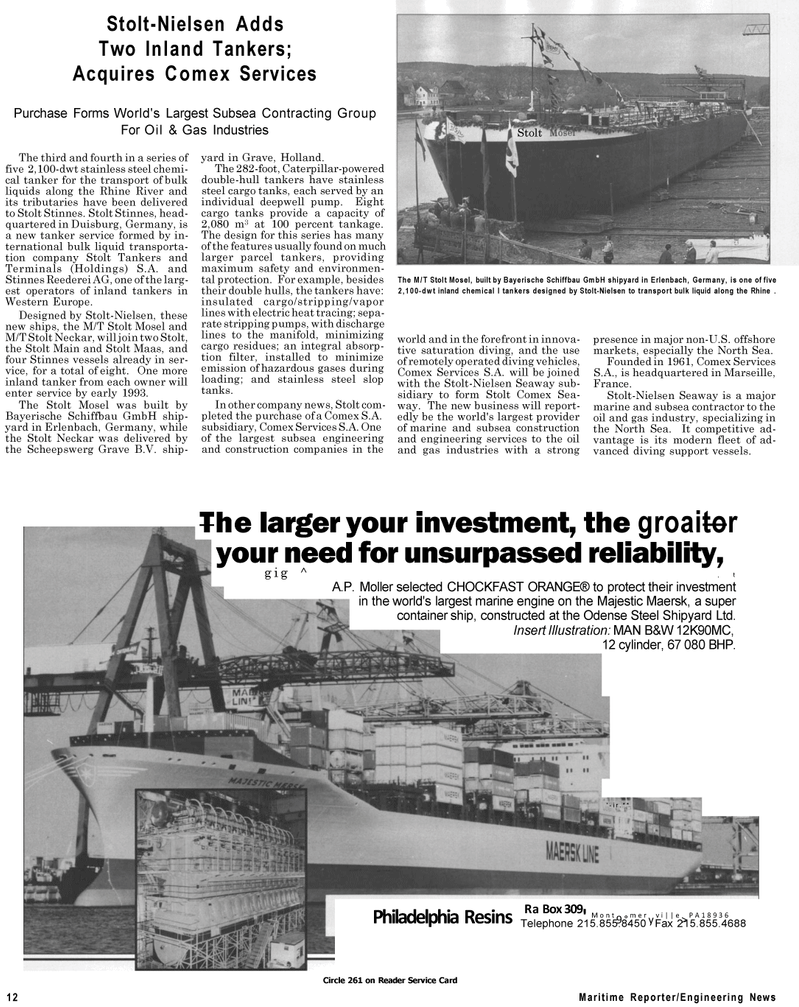 The M/T Stolt Mosel, built by Bayerische Schiffbau GmbH shipyard in Erlenbach, Germany, is one of five 2,100-dwt inland chemical I tankers designed by Stolt-Nielsen to transport bulk liquid along the Rhine .

The third and fourth in a series of five 2,100-dwt stainless steel chemi- cal tanker for the transport of bulk liquids along the Rhine River and its tributaries have been delivered to Stolt Stinnes. Stolt Stinnes, head- quartered in Duisburg, Germany, is a new tanker service formed by in- ternational bulk liquid transporta- tion company Stolt Tankers and

Stinnes Reederei AG, one of the larg- est operators of inland tankers in

Designed by Stolt-Nielsen, these new ships, the M/T Stolt Mosel and

M/T Stolt Neckar, will join two Stolt, the Stolt Main and Stolt Maas, and four Stinnes vessels already in ser- vice, for a total of eight. One more inland tanker from each owner will enter service by early 1993.

The Stolt Mosel was built by

The design for this series has many of the features usually found on much larger parcel tankers, providing maximum safety and environmen- tal protection. For example, besides their double hulls, the tankers have: insulated cargo/stripping/vapor lines with electric heat tracing; sepa- rate stripping pumps, with discharge lines to the manifold, minimizing cargo residues; an integral absorp- tion filter, installed to minimize emission of hazardous gases during loading; and stainless steel slop tanks.

In other company news, Stolt com- pleted the purchase of a Comex S.A. subsidiary, Comex Services S.A. One of the largest subsea engineering and construction companies in the world and in the forefront in innova- tive saturation diving, and the use of remotely operated diving vehicles,

Comex Services S.A. will be joined with the Stolt-Nielsen Seaway sub- sidiary to form Stolt Comex Sea- way. The new business will report- edly be the world's largest provider of marine and subsea construction and engineering services to the oil and gas industries with a strong presence in major non-U.S. offshore markets, especially the North Sea.

S.A., is headquartered in Marseille,

Stolt-Nielsen Seaway is a major marine and subsea contractor to the oil and gas industry, specializing in the North Sea. It competitive ad- vantage is its modern fleet of ad- vanced diving support vessels.

The larger your investment, the groaitor your need for unsurpassed reliability, gig ^ , t

A.P. Moller selected CHOCKFAST ORANGE® to protect their investment in the world's largest marine engine on the Majestic Maersk, a super container ship, constructed at the Odense Steel Shipyard Ltd.