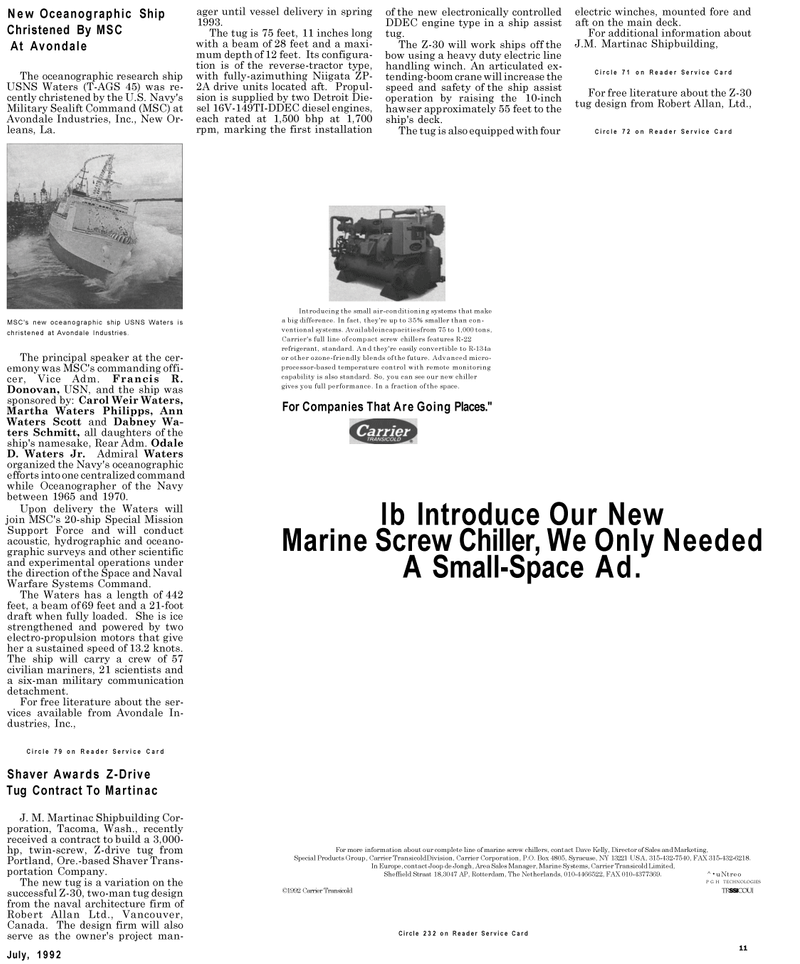 USNS Waters (T-AGS 45) was re- cently christened by the U.S. Navy's

Donovan, USN, and the ship was sponsored by: Carol Weir Waters,

D. Waters Jr. Admiral Waters organized the Navy's oceanographic efforts into one centralized command while Oceanographer of the Navy between 1965 and 1970.

Upon delivery the Waters will join MSC's 20-ship Special Mission

Support Force and will conduct acoustic, hydrographic and oceano- graphic surveys and other scientific and experimental operations under the direction of the Space and Naval

The Waters has a length of 442 feet, a beam of 69 feet and a 21-foot draft when fully loaded. She is ice strengthened and powered by two electro-propulsion motors that give her a sustained speed of 13.2 knots.

The ship will carry a crew of 57 civilian mariners, 21 scientists and a six-man military communication detachment.

For free literature about the ser- vices available from Avondale In- dustries, Inc.,

The new tug is a variation on the successful Z-30, two-man tug design from the naval architecture firm of

Canada. The design firm will also serve as the owner's project man- ager until vessel delivery in spring 1993.

The tug is 75 feet, 11 inches long with a beam of 28 feet and a maxi- mum depth of 12 feet. Its configura- tion is of the reverse-tractor type, with fully-azimuthing Niigata ZP- 2A drive units located aft. Propul- sion is supplied by two Detroit Die- sel 16V-149TI-DDEC diesel engines, each rated at 1,500 bhp at 1,700 rpm, marking the first installation of the new electronically controlled

The Z-30 will work ships off the bow using a heavy duty electric line handling winch. An articulated ex- tending-boom crane will increase the speed and safety of the ship assist operation by raising the 10-inch hawser approximately 55 feet to the ship's deck.

The tug is also equipped with four electric winches, mounted fore and aft on the main deck.

For additional information about

For free literature about the Z-30 tug design from Robert Allan, Ltd.,

Introducing the small air-conditioning systems that make a big difference. In fact, they're up to 35% smaller than con- ventional systems. Availableincapacitiesfrom 75 to 1,000 tons,

Carrier's full line of compact screw chillers features R-22 refrigerant, standard. And they're easily convertible to R-134a or other ozone-friendly blends of the future. Advanced micro- processor-based temperature control with remote monitoring capability is also standard. So, you can see our new chiller gives you full performance. In a fraction of the space.

For Companies That Are Going Places." lb Introduce Our New Marine Screw Chiller, We Only Needed

For more information about our complete line of marine screw chillers, contact Dave Kelly, Director of Sales and Marketing,