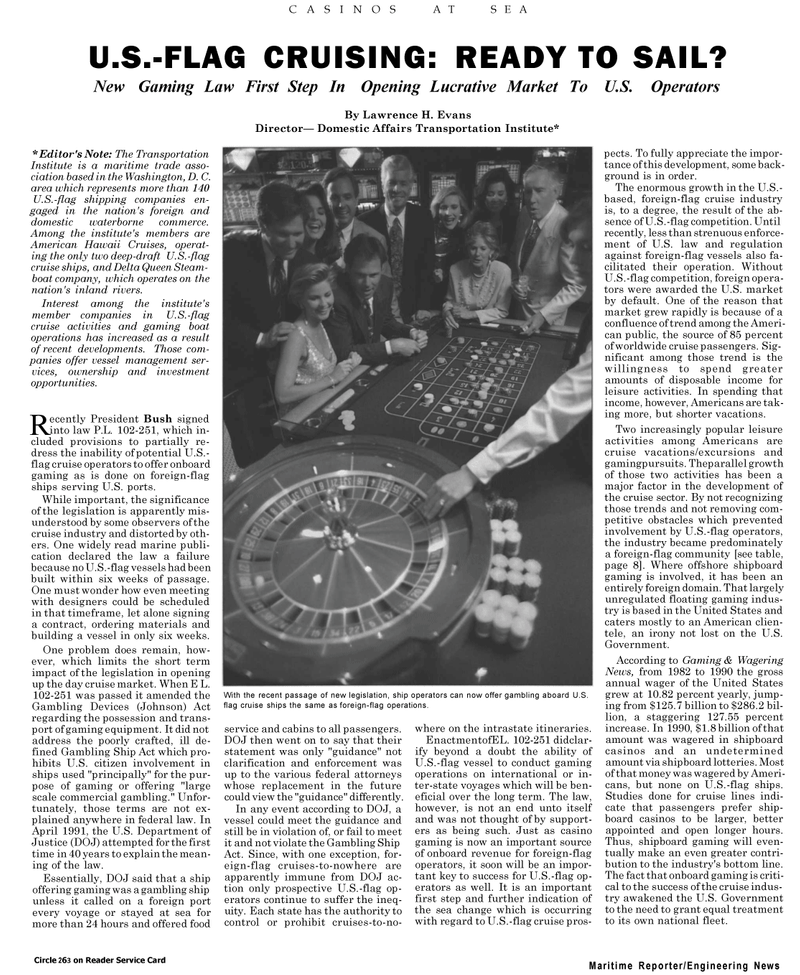 Institute is a maritime trade asso- ciation based in the Washington, D. C. area which represents more than 140

Among the institute's members are

Recently President Bush signed into law P.L. 102-251, which in- cluded provisions to partially re- dress the inability of potential U.S.- flag cruise operators to offer onboard gaming as is done on foreign-flag ships serving U.S. ports.

While important, the significance of the legislation is apparently mis- understood by some observers of the cruise industry and distorted by oth- ers. One widely read marine publi- cation declared the law a failure because no U.S.-flag vessels had been built within six weeks of passage.

One must wonder how even meeting with designers could be scheduled in that timeframe, let alone signing a contract, ordering materials and building a vessel in only six weeks.

One problem does remain, how- ever, which limits the short term impact of the legislation in opening up the day cruise market. When E L. 102-251 was passed it amended the

Gambling Devices (Johnson) Act regarding the possession and trans- port of gaming equipment. It did not address the poorly crafted, ill de- fined Gambling Ship Act which pro- hibits U.S. citizen involvement in ships used "principally" for the pur- pose of gaming or offering "large scale commercial gambling." Unfor- tunately, those terms are not ex- plained anywhere in federal law. In

Justice (DOJ) attempted for the first time in 40 years to explain the mean- ing of the law.

Essentially, DOJ said that a ship offering gaming was a gambling ship unless it called on a foreign port every voyage or stayed at sea for more than 24 hours and offered food service and cabins to all passengers.

DOJ then went on to say that their statement was only "guidance" not clarification and enforcement was up to the various federal attorneys whose replacement in the future could view the "guidance" differently.

In any event according to DOJ, a vessel could meet the guidance and still be in violation of, or fail to meet it and not violate the Gambling Ship

Act. Since, with one exception, for- eign-flag cruises-to-nowhere are apparently immune from DOJ ac- tion only prospective U.S.-flag op- erators continue to suffer the ineq- uity. Each state has the authority to control or prohibit cruises-to-no- where on the intrastate itineraries.

U.S.-flag vessel to conduct gaming operations on international or in- ter-state voyages which will be ben- eficial over the long term. The law, however, is not an end unto itself and was not thought of by support- ers as being such. Just as casino gaming is now an important source of onboard revenue for foreign-flag operators, it soon will be an impor- tant key to success for U.S.-flag op- erators as well. It is an important first step and further indication of the sea change which is occurring with regard to U.S.-flag cruise pros- pects. To fully appreciate the impor- tance of this development, some back- ground is in order.

The enormous growth in the U.S.- based, foreign-flag cruise industry is, to a degree, the result of the ab- sence of U.S.-flag competition. Until recently, less than strenuous enforce- ment of U.S. law and regulation against foreign-flag vessels also fa- cilitated their operation. Without

U.S.-flag competition, foreign opera- tors were awarded the U.S. market by default. One of the reason that market grew rapidly is because of a confluence of trend among the Ameri- can public, the source of 85 percent of worldwide cruise passengers. Sig- nificant among those trend is the willingness to spend greater amounts of disposable income for leisure activities. In spending that income, however, Americans are tak- ing more, but shorter vacations.

Two increasingly popular leisure activities among Americans are cruise vacations/excursions and gamingpursuits. Theparallel growth of those two activities has been a major factor in the development of the cruise sector. By not recognizing those trends and not removing com- petitive obstacles which prevented involvement by U.S.-flag operators, the industry became predominately a foreign-flag community [see table, page 8]. Where offshore shipboard gaming is involved, it has been an entirely foreign domain. That largely unregulated floating gaming indus- try is based in the United States and caters mostly to an American clien- tele, an irony not lost on the U.S.

According to Gaming & Wagering

Thus, shipboard gaming will even- tually make an even greater contri- bution to the industry's bottom line.

The fact that onboard gaming is criti- cal to the success of the cruise indus- try awakened the U.S. Government to the need to grant equal treatment to its own national fleet.