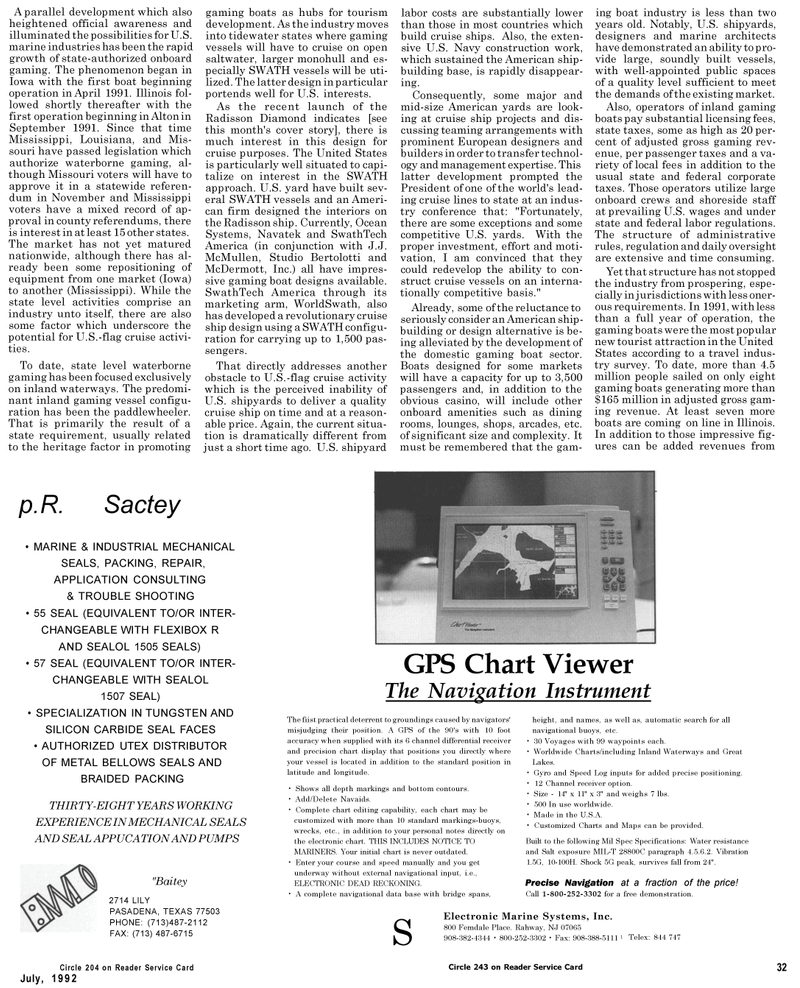 A parallel development which also heightened official awareness and illuminated the possibilities for U.S. marine industries has been the rapid growth of state-authorized onboard gaming. The phenomenon began in

September 1991. Since that time

Mississippi, Louisiana, and Mis- souri have passed legislation which authorize waterborne gaming, al- though Missouri voters will have to approve it in a statewide referen- dum in November and Mississippi voters have a mixed record of ap- proval in county referendums, there is interest in at least 15 other states.

The market has not yet matured nationwide, although there has al- ready been some repositioning of equipment from one market (Iowa) to another (Mississippi). While the state level activities comprise an industry unto itself, there are also some factor which underscore the potential for U.S.-flag cruise activi- ties.

To date, state level waterborne gaming has been focused exclusively on inland waterways. The predomi- nant inland gaming vessel configu- ration has been the paddlewheeler.

That is primarily the result of a state requirement, usually related to the heritage factor in promoting gaming boats as hubs for tourism development. As the industry moves into tidewater states where gaming vessels will have to cruise on open saltwater, larger monohull and es- pecially SWATH vessels will be uti- lized. The latter design in particular portends well for U.S. interests.

As the recent launch of the

Radisson Diamond indicates [see this month's cover story], there is much interest in this design for cruise purposes. The United States is particularly well situated to capi- talize on interest in the SWATH approach. U.S. yard have built sev- eral SWATH vessels and an Ameri- can firm designed the interiors on the Radisson ship. Currently, Ocean

America (in conjunction with J.J.

SwathTech America through its marketing arm, WorldSwath, also has developed a revolutionary cruise ship design using a SWATH configu- ration for carrying up to 1,500 pas- sengers.

That directly addresses another obstacle to U.S.-flag cruise activity which is the perceived inability of

U.S. shipyards to deliver a quality cruise ship on time and at a reason- able price. Again, the current situa- tion is dramatically different from just a short time ago. U.S. shipyard labor costs are substantially lower than those in most countries which build cruise ships. Also, the exten- sive U.S. Navy construction work, which sustained the American ship- building base, is rapidly disappear- ing.

Consequently, some major and mid-size American yards are look- ing at cruise ship projects and dis- cussing teaming arrangements with prominent European designers and builders in order to transfer technol- ogy and management expertise. This latter development prompted the

President of one of the world's lead- ing cruise lines to state at an indus- try conference that: "Fortunately, there are some exceptions and some competitive U.S. yards. With the proper investment, effort and moti- vation, I am convinced that they could redevelop the ability to con- struct cruise vessels on an interna- tionally competitive basis."

Already, some of the reluctance to seriously consider an American ship- building or design alternative is be- ing alleviated by the development of the domestic gaming boat sector.

Boats designed for some markets will have a capacity for up to 3,500 passengers and, in addition to the obvious casino, will include other onboard amenities such as dining rooms, lounges, shops, arcades, etc. of significant size and complexity. It must be remembered that the gam- ing boat industry is less than two years old. Notably, U.S. shipyards, designers and marine architects have demonstrated an ability to pro- vide large, soundly built vessels, with well-appointed public spaces of a quality level sufficient to meet the demands of the existing market.

Also, operators of inland gaming boats pay substantial licensing fees, state taxes, some as high as 20 per- cent of adjusted gross gaming rev- enue, per passenger taxes and a va- riety of local fees in addition to the usual state and federal corporate taxes. Those operators utilize large onboard crews and shoreside staff at prevailing U.S. wages and under state and federal labor regulations.

The structure of administrative rules, regulation and daily oversight are extensive and time consuming.

Yet that structure has not stopped the industry from prospering, espe- cially in jurisdictions with less oner- ous requirements. In 1991, with less than a full year of operation, the gaming boats were the most popular new tourist attraction in the United

States according to a travel indus- try survey. To date, more than 4.5 million people sailed on only eight gaming boats generating more than $165 million in adjusted gross gam- ing revenue. At least seven more boats are coming on line in Illinois.

In addition to those impressive fig- ures can be added revenues from p.R. Sactey • MARINE & INDUSTRIAL MECHANICAL

CHANGEABLE WITH SEALOL 1507 SEAL) • SPECIALIZATION IN TUNGSTEN AND

OF METAL BELLOWS SEALS AND

The fiist practical deterrent to groundings caused by navigators' misjudging their position. A GPS of the 90's with 10 foot accuracy when supplied with its 6 channel differential receiver and precision chart display that positions you directly where your vessel is located in addition to the standard position in latitude and longitude. • Shows all depth markings and bottom contours. • Add/Delete Navaids. • Complete chart editing capability, each chart may be customized with more than 10 standard markings-buoys, wrecks, etc., in addition to your personal notes directly on the electronic chart. THIS INCLUDES NOTICE TO

MARINERS. Your initial chart is never outdated. • Enter your course and speed manually and you get underway without external navigational input, i.e.,

ELECTRONIC DEAD RECKONING. • A complete navigational data base with bridge spans, height, and names, as well as, automatic search for all navigational buoys, etc. • 30 Voyages with 99 waypoints each. • Worldwide Charts/including Inland Waterways and Great

Precise Navigation at a fraction of the price!