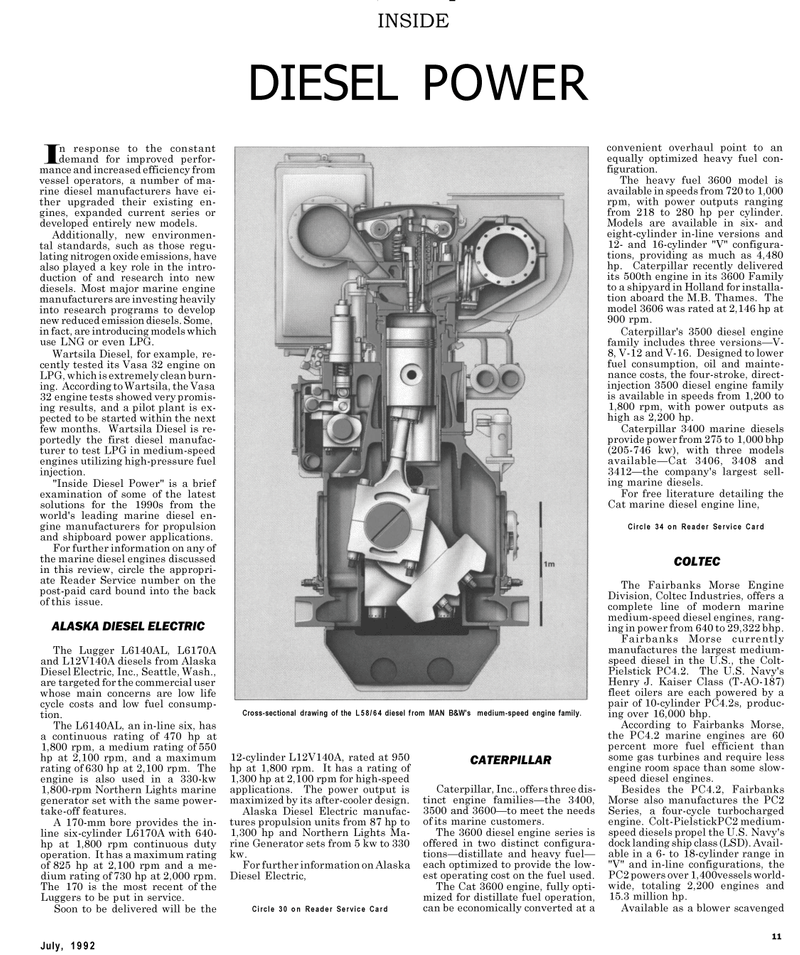 Additionally, new environmen- tal standards, such as those regu- lating nitrogen oxide emissions, have also played a key role in the intro- duction of and research into new diesels. Most major marine engine manufacturers are investing heavily into research programs to develop new reduced emission diesels. Some, in fact, are introducing models which use LNG or even LPG.

Wartsila Diesel, for example, re- cently tested its Vasa 32 engine on

LPG, which is extremely clean burn- ing. According to Wartsila, the Vasa 32 engine tests showed very promis- ing results, and a pilot plant is ex- pected to be started within the next few months. Wartsila Diesel is re- portedly the first diesel manufac- turer to test LPG in medium-speed engines utilizing high-pressure fuel injection. "Inside Diesel Power" is a brief examination of some of the latest solutions for the 1990s from the world's leading marine diesel en- gine manufacturers for propulsion and shipboard power applications.

For further information on any of the marine diesel engines discussed in this review, circle the appropri- ate Reader Service number on the post-paid card bound into the back of this issue.

Luggers to be put in service.

For further information on Alaska

The 3600 diesel engine series is offered in two distinct configura- tions—distillate and heavy fuel— each optimized to provide the low- est operating cost on the fuel used.

Models are available in six- and eight-cylinder in-line versions and 12- and 16-cylinder "V" configura- tions, providing as much as 4,480 hp. Caterpillar recently delivered its 500th engine in its 3600 Family to a shipyard in Holland for installa- tion aboard the M.B. Thames. The model 3606 was rated at 2,146 hp at 900 rpm.

According to Fairbanks Morse, the PC4.2 marine engines are 60 percent more fuel efficient than some gas turbines and require less engine room space than some slow- speed diesel engines.

Besides the PC4.2, Fairbanks

Available as a blower scavenged