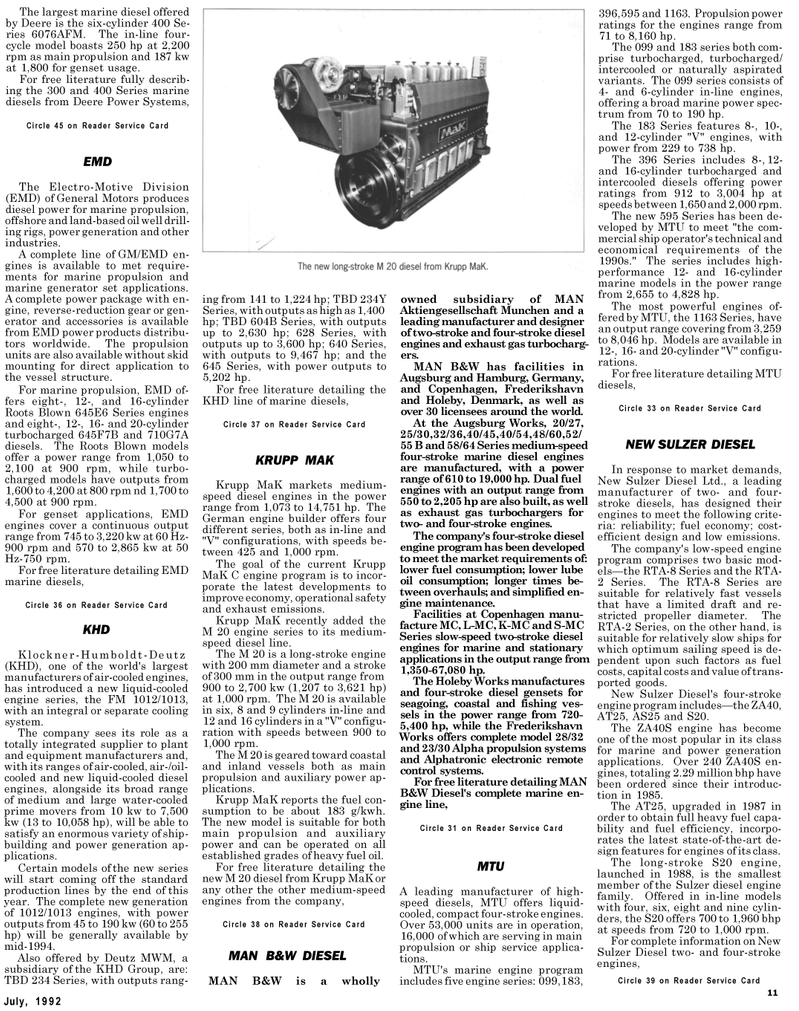 A complete power package with en- gine, reverse-reduction gear or gen- erator and accessories is available from EMD power products distribu- tors worldwide. The propulsion units are also available without skid mounting for direct application to the vessel structure.

Klockner-Humboldt-Deutz (KHD), one of the world's largest manufacturers of air-cooled engines, has introduced a new liquid-cooled engine series, the FM 1012/1013, with an integral or separate cooling system.

The company sees its role as a totally integrated supplier to plant and equipment manufacturers and, with its ranges of air-cooled, air-/oil- cooled and new liquid-cooled diesel engines, alongside its broad range of medium and large water-cooled prime movers from 10 kw to 7,500 kw (13 to 10,058 hp), will be able to satisfy an enormous variety of ship- building and power generation ap- plications.

Certain models of the new series will start coming off the standard production lines by the end of this year. The complete new generation of 1012/1013 engines, with power outputs from 45 to 190 kw (60 to 255 hp) will be generally available by mid-1994.

Also offered by Deutz MWM, a subsidiary of the KHD Group, are:

German engine builder offers four different series, both as in-line and "V" configurations, with speeds be- tween 425 and 1,000 rpm.

The goal of the current Krupp

The M 20 is geared toward coastal and inland vessels both as main propulsion and auxiliary power ap- plications.

Krupp MaK reports the fuel con- sumption to be about 183 g/kwh.

The new model is suitable for both main propulsion and auxiliary power and can be operated on all established grades of heavy fuel oil.

For free literature detailing the new M 20 diesel from Krupp MaK or any other the other medium-speed engines from the company,

MAN B&W is a wholly owned subsidiary of MAN

Aktiengesellschaft Munchen and a leading manufacturer and designer of two-stroke and four-stroke diesel engines and exhaust gas turbocharg- ers.

MAN B&W has facilities in

Augsburg and Hamburg, Germany, and Copenhagen, Frederikshavn and Holeby, Denmark, as well as over 30 licensees around the world.

Series slow-speed two-stroke diesel engines for marine and stationary applications in the output range from 1,350-67,080 hp.

The Holeby Works manufactures and four-stroke diesel gensets for seagoing, coastal and fishing ves- sels in the power range from 720- 5,400 hp, while the Frederikshavn

Over 53,000 units are in operation, 16,000 of which are serving in main propulsion or ship service applica- tions.

The 099 and 183 series both com- prise turbocharged, turbocharged/ intercooled or naturally aspirated variants. The 099 series consists of 4- and 6-cylinder in-line engines, offering a broad marine power spec- trum from 70 to 190 hp.

The new 595 Series has been de- veloped by MTU to meet "the com- mercial ship operator's technical and economical requirements of the 1990s." The series includes high- performance 12- and 16-cylinder marine models in the power range from 2,655 to 4,828 hp.

In response to market demands,

The company's low-speed engine program comprises two basic mod- els—the RTA-8 Series and the RTA- 2 Series. The RTA-8 Series are suitable for relatively fast vessels that have a limited draft and re- stricted propeller diameter. The

RTA-2 Series, on the other hand, is suitable for relatively slow ships for which optimum sailing speed is de- pendent upon such factors as fuel costs, capital costs and value of trans- ported goods.

The ZA40S engine has become one of the most popular in its class for marine and power generation applications. Over 240 ZA40S en- gines, totaling 2.29 million bhp have been ordered since their introduc- tion in 1985.

The AT25, upgraded in 1987 in order to obtain full heavy fuel capa- bility and fuel efficiency, incorpo- rates the latest state-of-the-art de- sign features for engines of its class.

For complete information on New