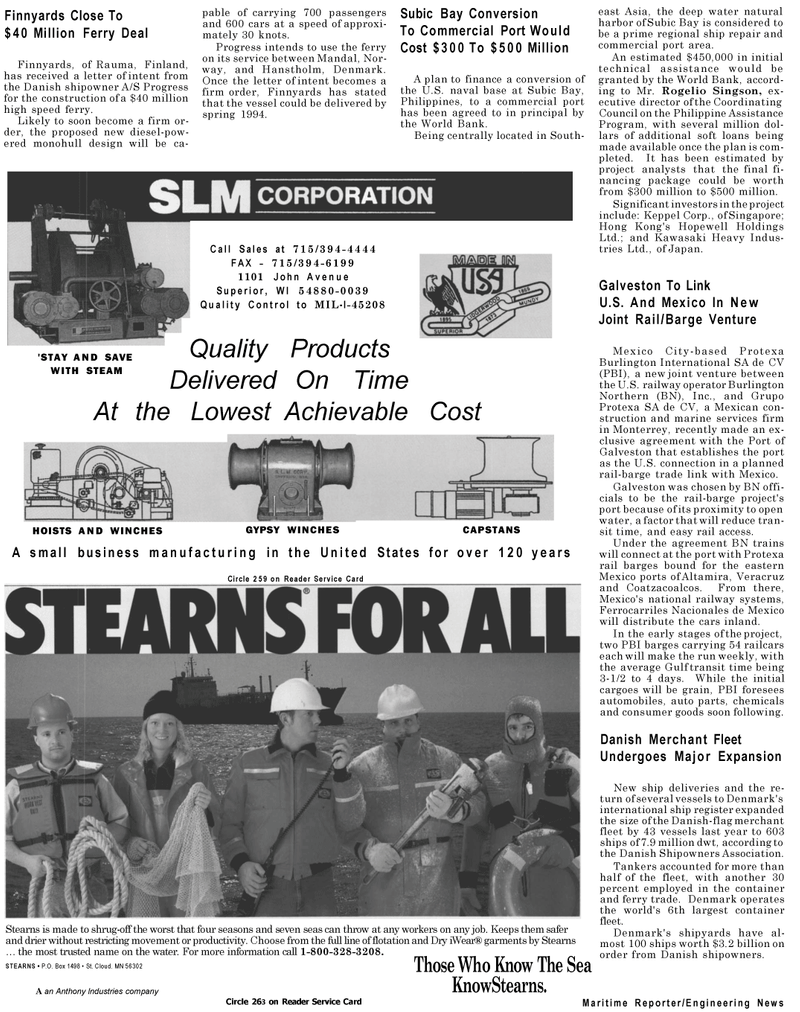 Stearns is made to shrug-off the worst that four seasons and seven seas can throw at any workers on any job. Keeps them safer and drier without restricting movement or productivity. Choose from the full line of flotation and Dry iWear® garments by Stearns ... the most trusted name on the water. For more information call 1-800-328-3208. Those Who Know The Sea

A an Anthony Industries company KnowStearns.

New ship deliveries and the re- turn of several vessels to Denmark's international ship register expanded the size of the Danish-flag merchant fleet by 43 vessels last year to 603 ships of 7.9 million dwt, according to the Danish Shipowners Association.

Tankers accounted for more than half of the fleet, with another 30 percent employed in the container and ferry trade. Denmark operates the world's 6th largest container fleet.

Denmark's shipyards have al- most 100 ships worth $3.2 billion on order from Danish shipowners.

Finnyards, of Rauma, Finland, has received a letter of intent from the Danish shipowner A/S Progress for the construction of a $40 million high speed ferry.

Likely to soon become a firm or- der, the proposed new diesel-pow- ered monohull design will be ca- pable of carrying 700 passengers and 600 cars at a speed of approxi- mately 30 knots.

Progress intends to use the ferry on its service between Mandal, Nor- way, and Hanstholm, Denmark.

Once the letter of intent becomes a firm order, Finnyards has stated that the vessel could be delivered by spring 1994.

To Commercial Port Would

A plan to finance a conversion of the U.S. naval base at Subic Bay,

Philippines, to a commercial port has been agreed to in principal by the World Bank.

Being centrally located in South- east Asia, the deep water natural harbor of Subic Bay is considered to be a prime regional ship repair and commercial port area.

An estimated $450,000 in initial technical assistance would be granted by the World Bank, accord- ing to Mr. Rogelio Singson, ex- ecutive director of the Coordinating

Council on the Philippine Assistance

Program, with several million dol- lars of additional soft loans being made available once the plan is com- pleted. It has been estimated by project analysts that the final fi- nancing package could be worth from $300 million to $500 million.

Significant investors in the project include: Keppel Corp., of Singapore;

U.S. And Mexico In New

Joint Rail/Barge Venture 'STAY AND SAVE

At the Lowest Achievable Cost

Protexa SA de CV, a Mexican con- struction and marine services firm in Monterrey, recently made an ex- clusive agreement with the Port of

Galveston that establishes the port as the U.S. connection in a planned rail-barge trade link with Mexico.

Galveston was chosen by BN offi- cials to be the rail-barge project's port because of its proximity to open water, a factor that will reduce tran- sit time, and easy rail access.

Mexico ports of Altamira, Veracruz and Coatzacoalcos. From there,

In the early stages of the project, two PBI barges carrying 54 railcars each will make the run weekly, with the average Gulf transit time being 3-1/2 to 4 days. While the initial cargoes will be grain, PBI foresees automobiles, auto parts, chemicals and consumer goods soon following.