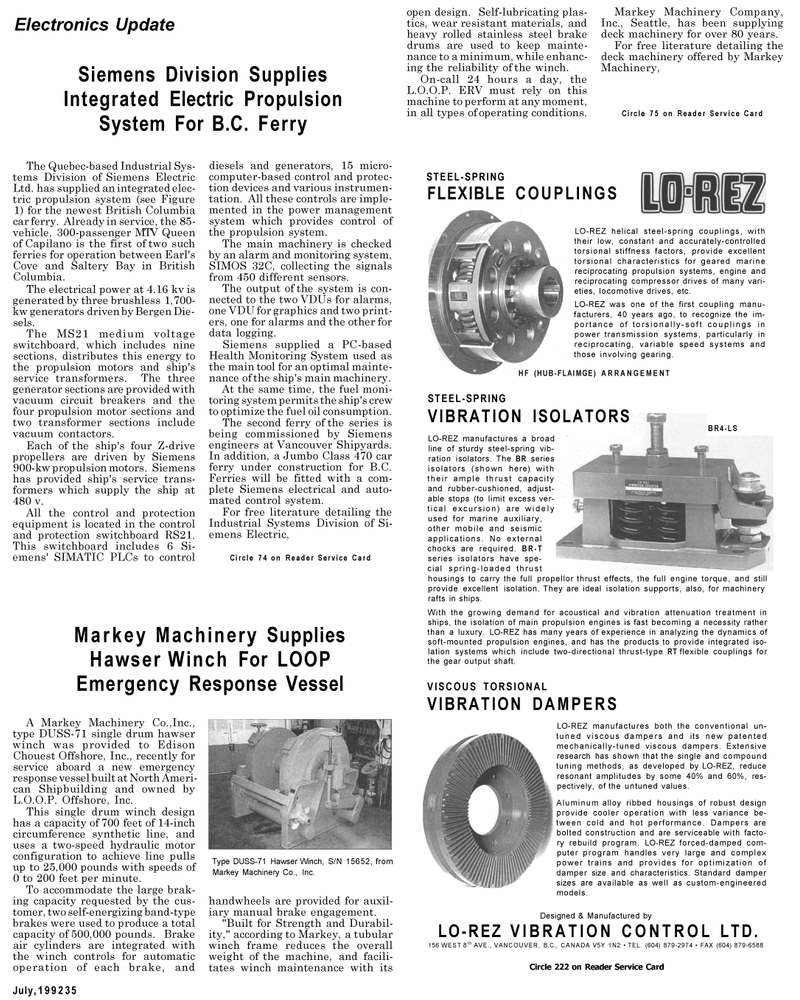 Ltd. has supplied an integrated elec- tric propulsion system (see Figure 1) for the newest British Columbia car ferry. Already in service, the 85- vehicle, 300-passenger MTV Queen of Capilano is the first of two such ferries for operation between Earl's

Cove and Saltery Bay in British

Each of the ship's four Z-drive propellers are driven by Siemens 900-kw propulsion motors. Siemens has provided ship's service trans- formers which supply the ship at 480 v.

Chouest Offshore, Inc., recently for service aboard a new emergency response vessel built at North Ameri- can Shipbuilding and owned by

This single drum winch design has a capacity of 700 feet of 14-inch circumference synthetic line, and uses a two-speed hydraulic motor configuration to achieve line pulls up to 25,000 pounds with speeds of 0 to 200 feet per minute.

To accommodate the large brak- ing capacity requested by the cus- tomer, two self-energizing band-type brakes were used to produce a total capacity of 500,000 pounds. Brake air cylinders are integrated with the winch controls for automatic operation of each brake, and open design. Self-lubricating plas- tics, wear resistant materials, and heavy rolled stainless steel brake drums are used to keep mainte- nance to a minimum, while enhanc- ing the reliability of the winch.

L.O.O.P. ERV must rely on this machine to perform at any moment, in all types of operating conditions.

Inc., Seattle, has been supplying deck machinery for over 80 years.

For free literature detailing the deck machinery offered by Markey

Circle 75 on Reader Service Card diesels and generators, 15 micro- computer-based control and protec- tion devices and various instrumen- tation. All these controls are imple- mented in the power management system which provides control of the propulsion system.

The main machinery is checked by an alarm and monitoring system,

The output of the system is con- nected to the two VDUs for alarms, one VDU for graphics and two print- ers, one for alarms and the other for data logging.

Health Monitoring System used as the main tool for an optimal mainte- nance of the ship's main machinery.

At the same time, the fuel moni- toring system permits the ship's crew to optimize the fuel oil consumption.

The second ferry of the series is being commissioned by Siemens engineers at Vancouver Shipyards.

In addition, a Jumbo Class 470 car ferry under construction for B.C.

Ferries will be fitted with a com- plete Siemens electrical and auto- mated control system.

Markey Machinery Co., Inc. handwheels are provided for auxil- iary manual brake engagement. "Built for Strength and Durabil- ity," according to Markey, a tubular winch frame reduces the overall weight of the machine, and facili- tates winch maintenance with its

LO-REZ was one of the first coupling manu- facturers, 40 years ago, to recognize the im- portance of torsionally-soft couplings in power transmission systems, particularly in reciprocating, variable speed systems and those involving gearing.

With the growing demand for acoustical and vibration attenuation treatment in ships, the isolation of main propulsion engines is fast becoming a necessity rather than a luxury. LO-REZ has many years of experience in analyzing the dynamics of soft-mounted propulsion engines, and has the products to provide integrated iso- lation systems which include two-directional thrust-type RT flexible couplings for the gear output shaft.

LO-REZ manufactures both the conventional un- tuned viscous dampers and its new patented mechanically-tuned viscous dampers. Extensive research has shown that the single and compound tuning methods, as developed by LO-REZ, reduce resonant amplitudes by some 40% and 60%, res- pectively, of the untuned values.