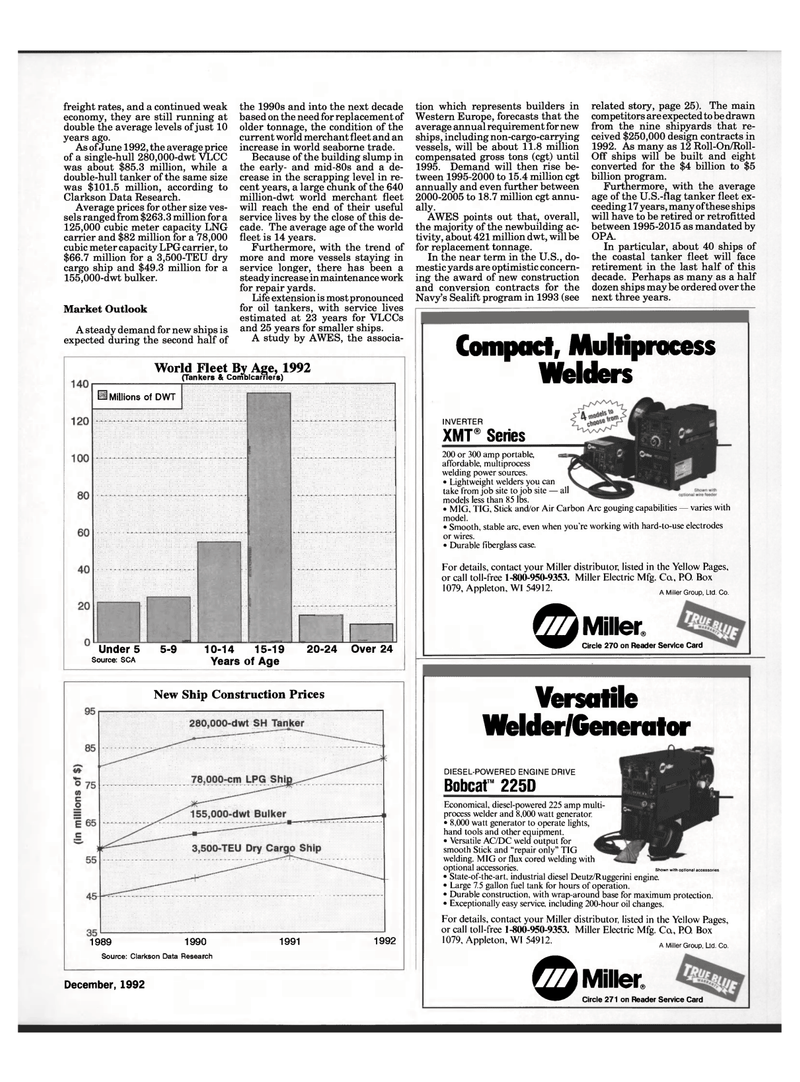 freight rates, and a continued weak economy, they are still running at double the average levels of just 10 years ago.

A steady demand for new ships is expected during the second half of the 1990s and into the next decade based on the need for replacement of older tonnage, the condition of the current world merchant fleet and an increase in world seaborne trade.

Because of the building slump in the early- and mid-80s and a de- crease in the scrapping level in re- cent years, a large chunk of the 640 million-dwt world merchant fleet will reach the end of their useful service lives by the close of this de- cade. The average age of the world fleet is 14 years.

Furthermore, with the trend of more and more vessels staying in service longer, there has been a steady increase in maintenance work for repair yards.

Life extension is most pronounced for oil tankers, with service lives estimated at 23 years for VLCCs and 25 years for smaller ships.

A study by AWES, the associa- tion which represents builders in

Western Europe, forecasts that the average annual requirement for new ships, including non-cargo-carrying vessels, will be about 11.8 million compensated gross tons (cgt) until 1995. Demand will then rise be- tween 1995-2000 to 15.4 million cgt annually and even further between 2000-2005 to 18.7 million cgt annu- ally.

AWES points out that, overall, the majority of the newbuilding ac- tivity, about 421 million dwt, will be for replacement tonnage.

In the near term in the U.S., do- mestic yards are optimistic concern- ing the award of new construction and conversion contracts for the

Off ships will be built and eight converted for the $4 billion to $5 billion program.

Furthermore, with the average age of the U.S.-flag tanker fleet ex- ceeding 17 years, many of these ships will have to be retired or retrofitted between 1995-2015 as mandated by

In particular, about 40 ships of the coastal tanker fleet will face retirement in the last half of this decade. Perhaps as many as a half dozen ships may be ordered over the next three years.