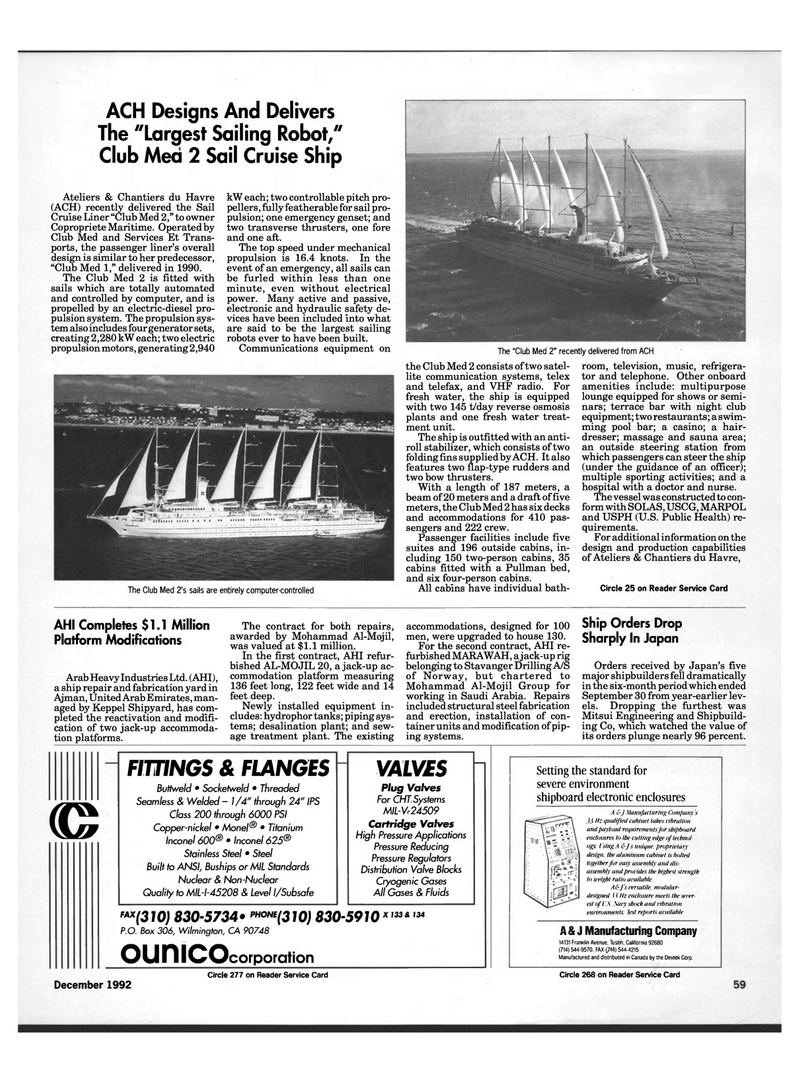 The Club Med 2 is fitted with sails which are totally automated and controlled by computer, and is propelled by an electric-diesel pro- pulsion system. The propulsion sys- tem also includes four generator sets, creating 2,280 kW each; two electric propulsion motors, generating 2,940 kW each; two controllable pitch pro- pellers, fully featherable for sail pro- pulsion; one emergency genset; and two transverse thrusters, one fore and one aft.

The top speed under mechanical propulsion is 16.4 knots. In the event of an emergency, all sails can be furled within less than one minute, even without electrical power. Many active and passive, electronic and hydraulic safety de- vices have been included into what are said to be the largest sailing robots ever to have been built.

The ship is outfitted with an anti- roll stabilizer, which consists of two folding fins supplied by ACH. It also features two flap-type rudders and two bow thrusters.

Passenger facilities include five suites and 196 outside cabins, in- cluding 150 two-person cabins, 35 cabins fitted with a Pullman bed, and six four-person cabins.

All cabins have individual bath- room, television, music, refrigera- tor and telephone. Other onboard amenities include: multipurpose lounge equipped for shows or semi- nars; terrace bar with night club equipment; two restaurants; a swim- ming pool bar; a casino; a hair- dresser; massage and sauna area; an outside steering station from which passengers can steer the ship (under the guidance of an officer); multiple sporting activities; and a hospital with a doctor and nurse.

The vessel was constructed to con- form with SOLAS, USCG, MARPOL and USPH (U.S. Public Health) re- quirements.

For additional information on the design and production capabilities of Ateliers & Chantiers du Havre,

The contract for both repairs, awarded by Mohammad Al-Mojil, was valued at $1.1 million.

For the second contract, AHI re- furbished MARAWAH, a jack-up rig belonging to Stavanger Drilling A/S of Norway, but chartered to

September 30 from year-earlier lev- els. Dropping the furthest was

Jj Hz qualified cabinet takes libration and pay load requirements for shipboard enclosures to the cutting edge of technol- ogy. I 'sing A & J s unique, proprietary design, the aluminum cabinet is bolted together for easy assembly and dis- assembly and provides the highest strength to weight ratio available.

Manufactured and distributed in Canada by the Devtek Corp.