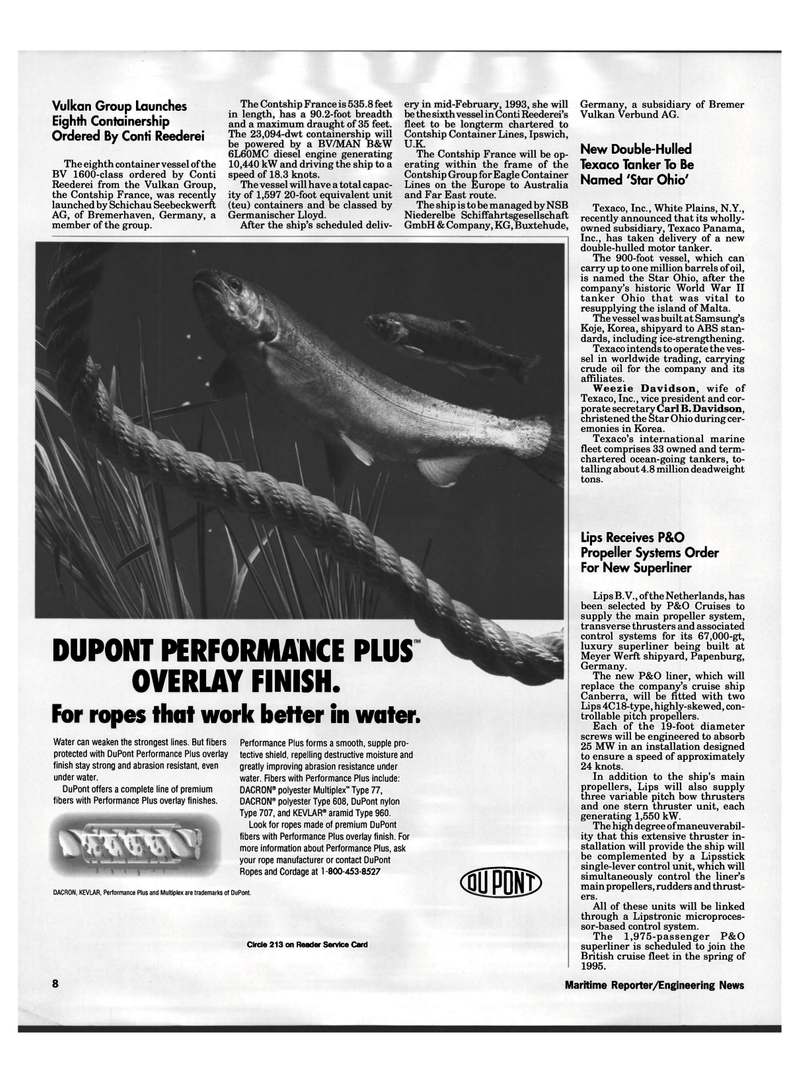 The eighth container vessel of the

AG, of Bremerhaven, Germany, a member of the group.

The vessel will have a total capac- ity of 1,597 20-foot equivalent unit (teu) containers and be classed by

After the ship's scheduled deliv- ery in mid-February, 1993, she will be the sixth vessel in Conti Reederei's fleet to be longterm chartered to

Lines on the Europe to Australia and Far East route.

The ship is to be managed by NSB

For ropes that work better in water.

Water can weaken the strongest lines. But fibers protected with DuPont Performance Plus overlay finish stay strong and abrasion resistant, even under water.

DuPont offers a complete line of premium fibers with Performance Plus overlay finishes.

Look for ropes made of premium DuPont fibers with Performance Plus overlay finish. For more information about Performance Plus, ask your rope manufacturer or contact DuPont

DACRON, KEVLAR, Performance Plus and Multiplex are trademarks of DuPont. cfflRD

Germany, a subsidiary of Bremer

Texaco Tanker To Be

Inc., has taken delivery of a new double-hulled motor tanker.

The 900-foot vessel, which can carry up to one million barrels of oil, is named the Star Ohio, after the company's historic World War II tanker Ohio that was vital to resupplying the island of Malta.

The vessel was built at Samsung's

Texaco intends to operate the ves- sel in worldwide trading, carrying crude oil for the company and its affiliates.

Lips B.V., of the Netherlands, has been selected by P&O Cruises to supply the main propeller system, transverse thrusters and associated control systems for its 67,000-gt, luxury superliner being built at

The new P&O liner, which will replace the company's cruise ship

Canberra, will be fitted with two

Each of the 19-foot diameter screws will be engineered to absorb 25 MW in an installation designed to ensure a speed of approximately 24 knots.

The high degree of maneuverabil- ity that this extensive thruster in- stallation will provide the ship will be complemented by a Lipsstick single-lever control unit, which will simultaneously control the liner's main propellers, rudders and thrust- ers.

The 1,975-passenger P&O superliner is scheduled to join the

British cruise fleet in the spring of 1995. 8 Maritime Reporter/Engineering News