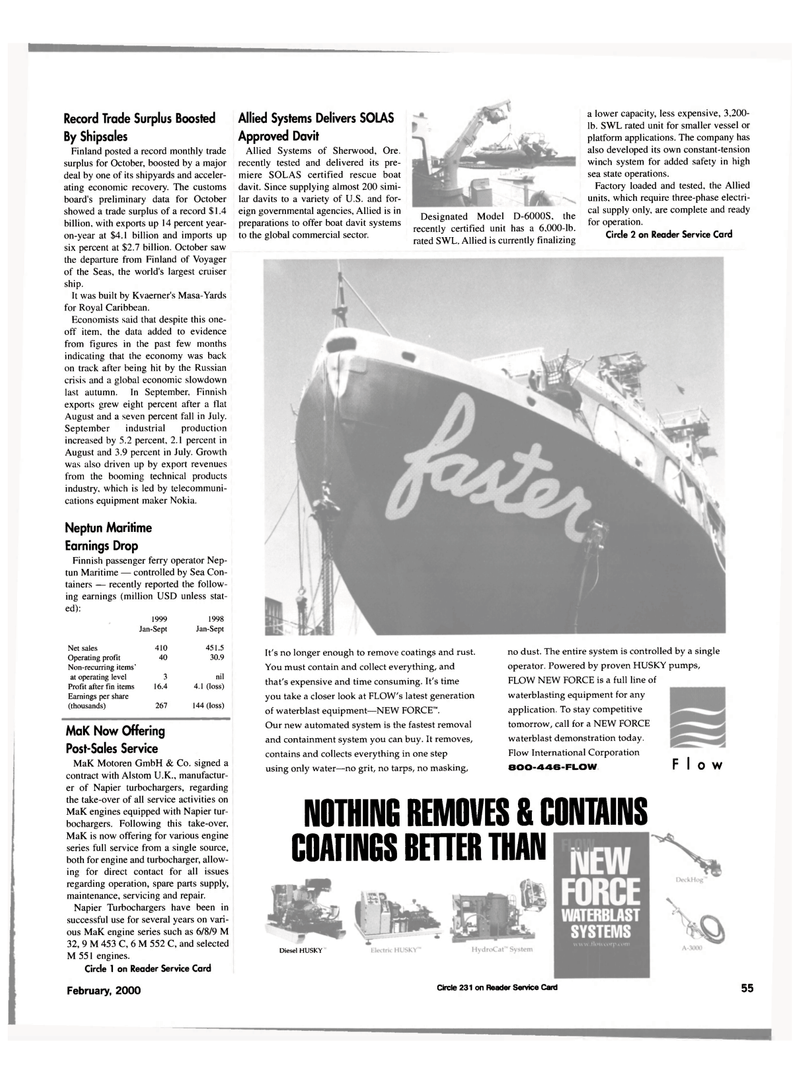 Finland posted a record monthly trade surplus for October, boosted by a major deal by one of its shipyards and acceler- ating economic recovery. The customs board's preliminary data for October showed a trade surplus of a record $ 1.4 billion, with exports up 14 percent year- on-year at $4.1 billion and imports up six percent at $2.7 billion. October saw the departure from Finland of Voyager of the Seas, the world's largest cruiser ship.

It was built by Kvaerner's Masa-Yards for Royal Caribbean.

Economists said that despite this one- off item, the data added to evidence from figures in the past few months indicating that the economy was back on track after being hit by the Russian crisis and a global economic slowdown last autumn. In September, Finnish exports grew eight percent after a flat

August and a seven percent fall in July.

August and 3.9 percent in July. Growth was also driven up by export revenues from the booming technical products industry, which is led by telecommuni- cations equipment maker Nokia.

MaK Motoren GmbH & Co. signed a contract with Alstom U.K., manufactur- er of Napier turbochargers, regarding the take-over of all service activities on

MaK is now offering for various engine series full service from a single source, both for engine and turbocharger, allow- ing for direct contact for all issues regarding operation, spare parts supply, maintenance, servicing and repair.

Factory loaded and tested, the Allied units, which require three-phase electri- cal supply only, are complete and ready for operation.

It's no longer enough to remove coatings and rust.

You must contain and collect everything, and that's expensive and time consuming. It's time you take a closer look at FLOW'S latest generation of waterblast equipment—NEW FORCE™'.

Our new automated system is the fastest removal and containment system you can buy. It removes, contains and collects everything in one step using only water—no grit, no tarps, no masking, no dust. The entire system is controlled by a single operator. Powered by proven HUSKY pumps,

FLOW NEW FORCE is a full line of waterblasting equipment for any application. To stay competitive tomorrow, call for a NEW FORCE waterblast demonstration today.