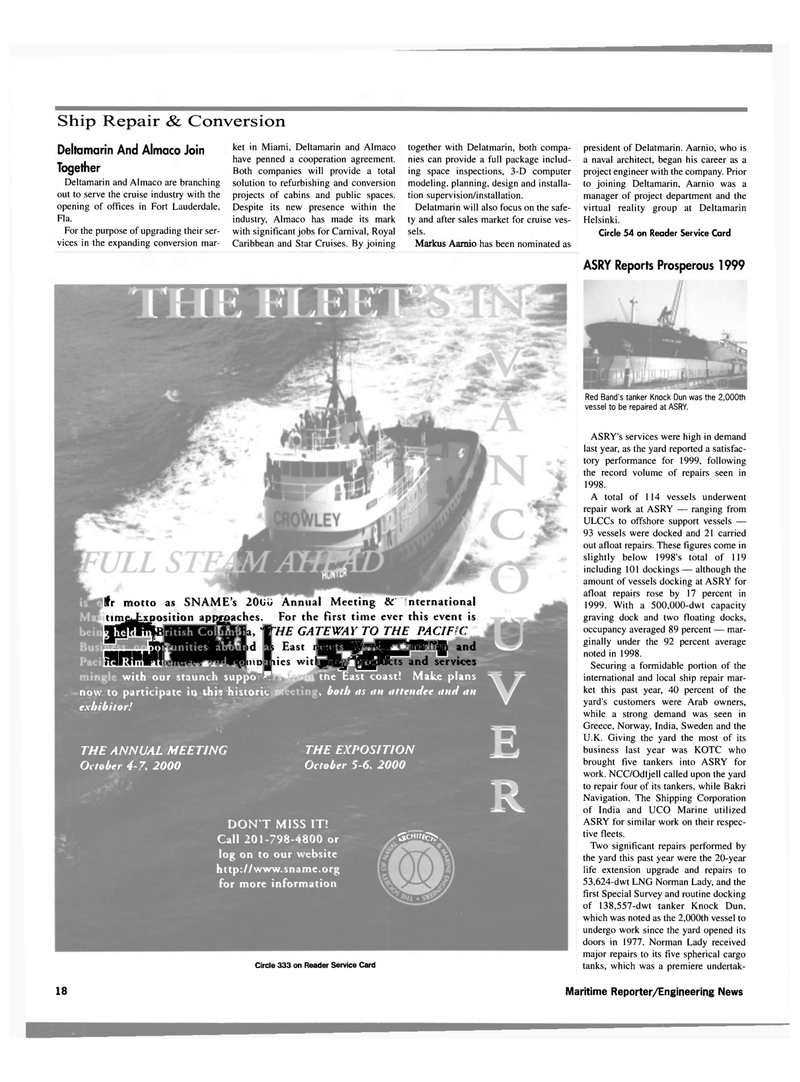 Ship Repair & Conversion president of Delatmarin. Aarnio, who is a naval architect, began his career as a project engineer with the company. Prior to joining Deltamarin, Aarnio was a manager of project department and the virtual reality group at Deltamarin

Red Band's tanker Knock Dun was the 2,000th vessel to be repaired at ASRY.

ASRY's services were high in demand last year, as the yard reported a satisfac- tory performance for 1999, following the record volume of repairs seen in 1998.

ULCCs to offshore support vessels — 93 vessels were docked and 21 carried out afloat repairs. These figures come in slightly below 1998's total of 119 including 101 dockings — although the amount of vessels docking at ASRY for afloat repairs rose by 17 percent in 1999. With a 500,000-dwt capacity graving dock and two floating docks, occupancy averaged 89 percent — mar- ginally under the 92 percent average noted in 1998.

Securing a formidable portion of the international and local ship repair mar- ket this past year, 40 percent of the yard's customers were Arab owners, while a strong demand was seen in

Greece, Norway, India, Sweden and the

U.K. Giving the yard the most of its business last year was KOTC who brought five tankers into ASRY for work. NCC/Odtjell called upon the yard to repair four of its tankers, while Bakri

Navigation, The Shipping Corporation of India and UCO Marine utilized

ASRY for similar work on their respec- tive fleets.

Two significant repairs performed by the yard this past year were the 20-year life extension upgrade and repairs to 53,624-dwt LNG Norman Lady, and the first Special Survey and routine docking of 138,557-dwt tanker Knock Dun, which was noted as the 2,000th vessel to undergo work since the yard opened its doors in 1977. Norman Lady received major repairs to its five spherical cargo

Circle 333 on Reader Service Card tanks, which was a premiere undertak-

Deltamarin and Almaco are branching out to serve the cruise industry with the opening of offices in Fort Lauderdale,

For the purpose of upgrading their ser- vices in the expanding conversion mar- ket in Miami, Deltamarin and Almaco have penned a cooperation agreement.

Both companies will provide a total solution to refurbishing and conversion projects of cabins and public spaces.

Despite its new presence within the industry, Almaco has made its mark with significant jobs for Carnival, Royal

Delatmarin will also focus on the safe- ty and after sales market for cruise ves- sels.

Markus Aarnio has been nominated as with tMj^^^^^^^Kml now to participate in this "histork exhibitor! ^^WpwW^IanatfTan and pl^w products and services tne East coast! Make plans , both as an attendee and an

Call 201 798-4800 or log on to our website http://www.sname.org for more information •^CHITf^ tr motto as SNAME's 2000 Annual Meeting "international tmr^:.xposition approaches. For the first time ever this event is jSflffi^ritish Cotpibia, "THE GATEWAY TO THE PACIFIC jftn^inities abound as East meets V^^^j^ffPfctrJ