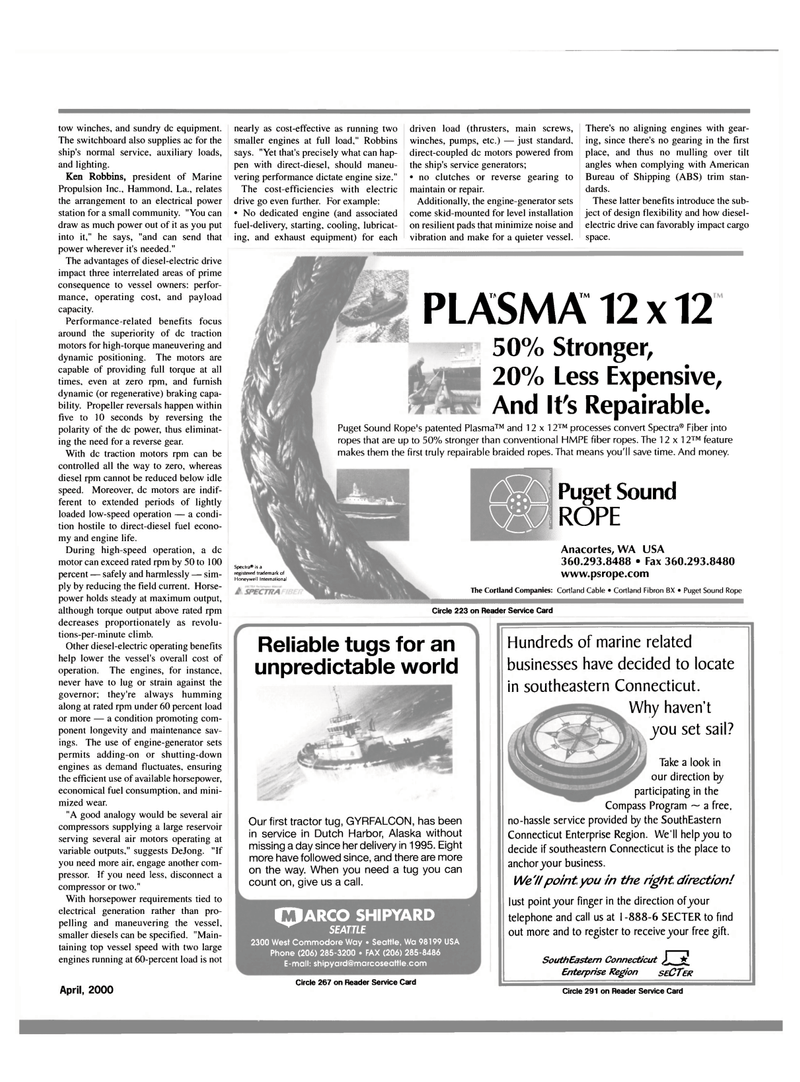 Propulsion Inc., Hammond, La., relates the arrangement to an electrical power station for a small community. "You can draw as much power out of it as you put into it," he says, "and can send that power wherever it's needed."

Performance-related benefits focus around the superiority of dc traction motors for high-torque maneuvering and dynamic positioning. The motors are capable of providing full torque at all times, even at zero rpm, and furnish dynamic (or regenerative) braking capa- bility. Propeller reversals happen within five to 10 seconds by reversing the polarity of the dc power, thus eliminat- ing the need for a reverse gear.

With dc traction motors rpm can be controlled all the way to zero, whereas diesel rpm cannot be reduced below idle speed. Moreover, dc motors are indif- ferent to extended periods of lightly loaded low-speed operation — a condi- tion hostile to direct-diesel fuel econo- my and engine life.

Other diesel-electric operating benefits help lower the vessel's overall cost of operation. The engines, for instance, never have to lug or strain against the governor; they're always humming along at rated rpm under 60 percent load or more — a condition promoting com- ponent longevity and maintenance sav- ings. The use of engine-generator sets permits adding-on or shutting-down engines as demand fluctuates, ensuring the efficient use of available horsepower, economical fuel consumption, and mini- mized wear. "A good analogy would be several air compressors supplying a large reservoir serving several air motors operating at variable outputs," suggests DeJong. "If you need more air, engage another com- pressor. If you need less, disconnect a compressor or two."

With horsepower requirements tied to electrical generation rather than pro- pelling and maneuvering the vessel, smaller diesels can be specified. "Main- taining top vessel speed with two large engines running at 60-percent load is not

Additionally, the engine-generator sets come skid-mounted for level installation on resilient pads that minimize noise and vibration and make for a quieter vessel.

There's no aligning engines with gear- ing, since there's no gearing in the first place, and thus no mulling over tilt angles when complying with American

These latter benefits introduce the sub- ject of design flexibility and how diesel- electric drive can favorably impact cargo space.

Puget Sound Rope's patented Plasma™ and 12x12™ processes convert Spectra® Fiber into ropes that are up to 50% stronger than conventional HMPE fiber ropes. The 12x12™ feature makes them the first truly repairable braided ropes. That means you'll save time. And money. (Sd

Spectra® is a registered trademark of

Reliable tugs for an unpredictable world

Our first tractor tug, GYRFALCON, has been in service in Dutch Harbor, Alaska without missing a day since her delivery in 1995. Eight more have followed since, and there are more on the way. When you need a tug you can count on, give us a call.

Hundreds of marine related businesses have decided to locate in southeastern Connecticut.

Why haven't you set sail?

Take a look in our direction by participating in the

Compass Program ~ a free, no-hassle service provided by the SouthEastern

Connecticut Enterprise Region. We'll helpyou to decide if southeastern Connecticut is the place to anchoryour business.

We'll point you in the right direction! lust point your finger in the direction of your telephone and call us at 1-888-6 SECTER to find out more and to register to receive your free gift.