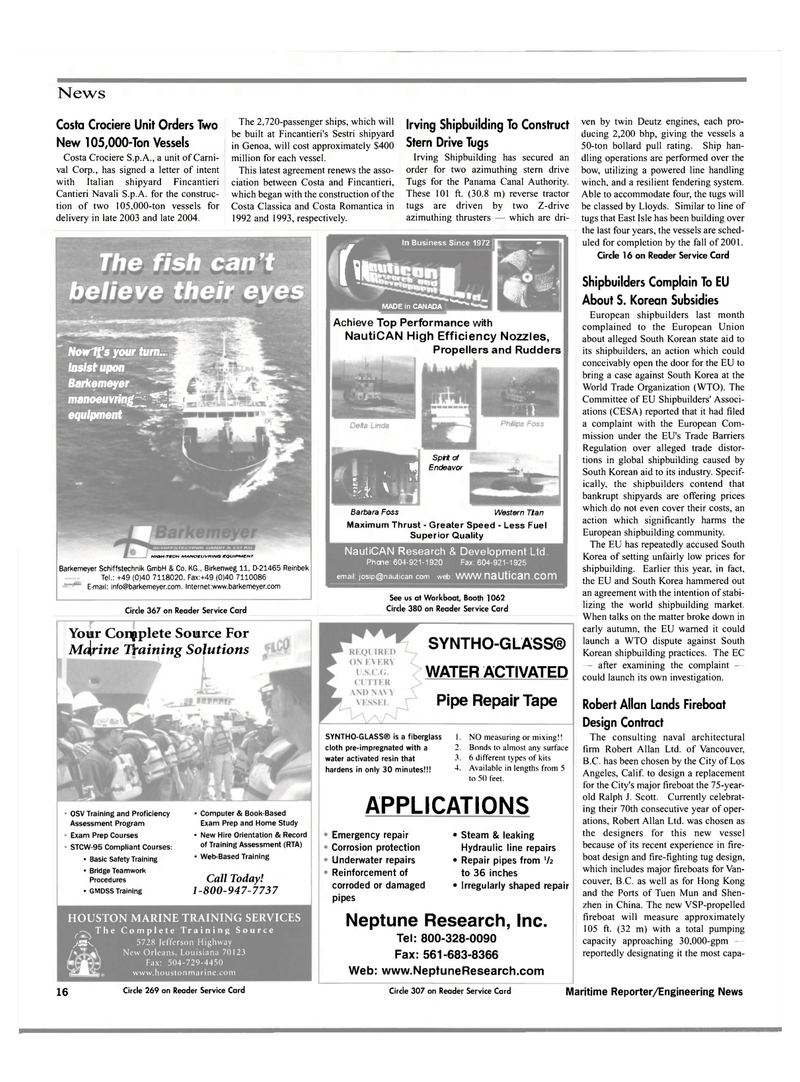 Costa Crociere S.p.A., a unit of Carni- val Corp., has signed a letter of intent with Italian shipyard Fincantieri

The 2,720-passenger ships, which will be built at Fincantieri's Sestri shipyard in Genoa, will cost approximately $400 million for each vessel.

This latest agreement renews the asso- ciation between Costa and Fincantieri, which began with the construction of the

Costa Classica and Costa Romantica in 1992 and 1993, respectively.

Tugs for the Panama Canal Authority.

Propellers and Rudders • 1 I k * Sprit of Endeavor

SYNTHO-GLASS® is a fiberglass cloth pre-impregnated with a water activated resin that hardens in only 30 minutes!!! 1. NO measuring or mixing!! 2. Bonds to almost any surface 3. 6 different types of kits 4. Available in lengths from 5 to 50 feet.

Able to accommodate four, the tugs will be classed by Lloyds. Similar to line of tugs that East Isle has been building over the last four years, the vessels are sched- uled for completion by the fall of 2001.

European shipbuilders last month complained to the European Union about alleged South Korean state aid to its shipbuilders, an action which could conceivably open the door for the EU to bring a case against South Korea at the

South Korean aid to its industry. Specif- ically, the shipbuilders contend that bankrupt shipyards are offering prices which do not even cover their costs, an action which significantly harms the

The EU has repeatedly accused South

Korea of setting unfairly low prices for shipbuilding. Earlier this year, in fact, the EU and South Korea hammered out an agreement with the intention of stabi- lizing the world shipbuilding market.

When talks on the matter broke down in early autumn, the EU warned it could launch a WTO dispute against South

Korean shipbuilding practices. The EC - after examining the complaint - could launch its own investigation.

B.C. has been chosen by the City of Los

Angeles, Calif, to design a replacement for the City's major fireboat the 75-year- old Ralph J. Scott. Currently celebrat- ing their 70th consecutive year of oper- ations, Robert Allan Ltd. was chosen as the designers for this new vessel because of its recent experience in fire- boat design and fire-fighting tug design, which includes major fireboats for Van- couver, B.C. as well as for Hong Kong and the Ports of Tuen Mun and Shen- zhen in China. The new VSP-propelled fireboat will measure approximately 105 ft. (32 m) with a total pumping capacity approaching 30,000-gpm - reportedly designating it the most capa-

Your Complete Source For