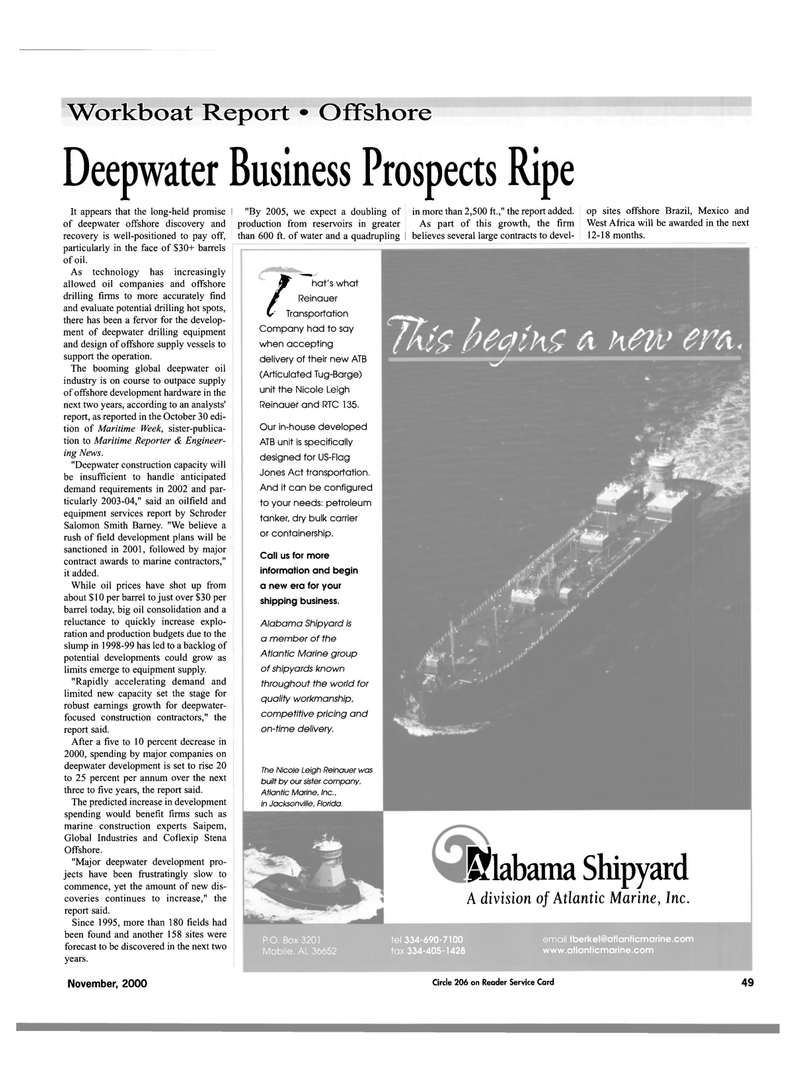 West Africa will be awarded in the next 12-18 months. particularly in the face of $30+ barrels of oil.

As technology has increasingly allowed oil companies and offshore drilling firms to more accurately find and evaluate potential drilling hot spots, there has been a fervor for the develop- ment of deepwater drilling equipment and design of offshore supply vessels to support the operation.

The booming global deepwater oil industry is on course to outpace supply of offshore development hardware in the next two years, according to an analysts' report, as reported in the October 30 edi- tion of Maritime Week, sister-publica- tion to Maritime Reporter & Engineer- ing News. "Deepwater construction capacity will be insufficient to handle anticipated demand requirements in 2002 and par- ticularly 2003-04," said an oilfield and equipment services report by Schroder

Salomon Smith Barney. "We believe a rush of field development plans will be sanctioned in 2001, followed by major contract awards to marine contractors," it added.

While oil prices have shot up from about $10 per barrel to just over $30 per barrel today, big oil consolidation and a reluctance to quickly increase explo- ration and production budgets due to the slump in 1998-99 has led to a backlog of potential developments could grow as limits emerge to equipment supply. "Rapidly accelerating demand and limited new capacity set the stage for robust earnings growth for deepwater- focused construction contractors," the report said.

After a five to 10 percent decrease in 2000, spending by major companies on deepwater development is set to rise 20 to 25 percent per annum over the next three to five years, the report said.

The predicted increase in development spending would benefit firms such as marine construction experts Saipem,

Offshore. "Major deepwater development pro- jects have been frustratingly slow to commence, yet the amount of new dis- coveries continues to increase," the report said.

Since 1995, more than 180 fields had been found and another 158 sites were forecast to be discovered in the next two years.

It appears that the long-held promise "By 2005, we expect a doubling of in more than 2,500 ft.," the report added, of deepwater offshore discovery and production from reservoirs in greater As part of this growth, the firm recovery is well-positioned to pay off, than 600 ft. of water and a quadrupling believes several large contracts to devel-

And it can be configured to your needs: petroleum tanker, dry bulk carrier or containership.

Call us for more information and begin a new era for your shipping business.

Alabama Shipyard is a member of the

The Nicole Leigh Reinauer was built by our sister company,