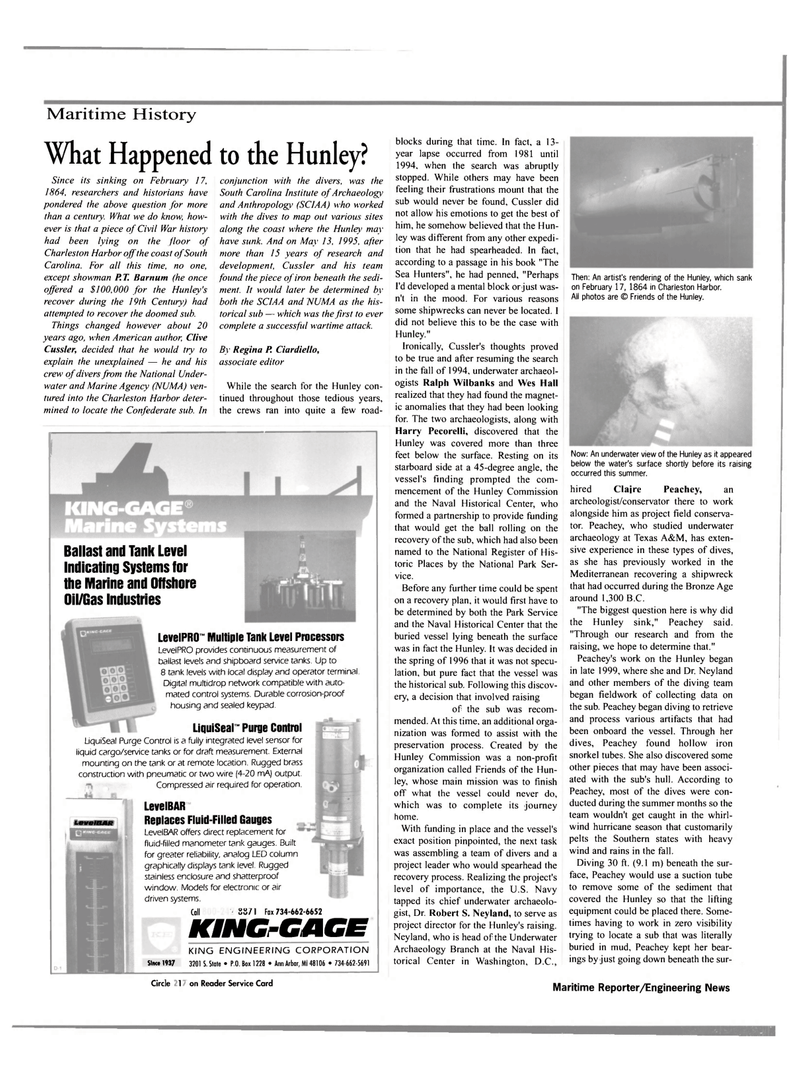 What Happened to the Hunley: ?

Since its sinking on February 17, 1864, researchers and historians have pondered the above question for more than a century. What we do know, how- ever is that a piece of Civil War history had been lying on the floor of

Charleston Harbor off the coast of South

Carolina. For all this time, no one, except showman P. T. Barn um (he once offered a $100,000 for the Hunley's recover during the 19th Century) had attempted to recover the doomed sub.

Things changed however about 20 years ago, when American author, Clive

Cussler, decided that he would try to explain the unexplained — he and his crew of divers from the National Under- water and Marine Agency (NUMA) ven- tured into the Charleston Harbor deter- mined to locate the Confederate sub. In conjunction with the divers, was the

South Carolina Institute of Archaeology and Anthropology (SCIA A) who worked with the dives to map out various sites along the coast where the Hunley may have sunk. And on May 13, 1995, after more than 15 years of research and development, Cussler and his team found the piece of iron beneath the sedi- ment. It would later be determined by both the SCIAA and NUMA as the his- torical sub — which was the first to ever complete a successful wartime attack.

While the search for the Hunley con- tinued throughout those tedious years, the crews ran into quite a few road- blocks during that time. In fact, a 13- year lapse occurred from 1981 until 1994, when the search was abruptly stopped. While others may have been feeling their frustrations mount that the sub would never be found, Cussler did not allow his emotions to get the best of him, he somehow believed that the Hun- ley was different from any other expedi- tion that he had spearheaded. In fact, according to a passage in his book "The

Sea Hunters", he had penned, "Perhaps

I'd developed a mental block or just was- n't in the mood. For various reasons some shipwrecks can never be located. I did not believe this to be the case with

Ironically, Cussler's thoughts proved to be true and after resuming the search in the fall of 1994, underwater archaeol- ogists Ralph Wilbanks and Wes Hall realized that they had found the magnet- ic anomalies that they had been looking for. The two archaeologists, along with

Harry Pecorelli, discovered that the

Hunley was covered more than three feet below the surface. Resting on its starboard side at a 45-degree angle, the vessel's finding prompted the com- mencement of the Hunley Commission and the Naval Historical Center, who formed a partnership to provide funding that would get the ball rolling on the recovery of the sub, which had also been named to the National Register of His- toric Places by the National Park Ser- vice.

Before any further time could be spent on a recovery plan, it would first have to be determined by both the Park Service and the Naval Historical Center that the buried vessel lying beneath the surface was in fact the Hunley. It was decided in the spring of 1996 that it was not specu- lation, but pure fact that the vessel was the historical sub. Following this discov- ery, a decision that involved raising of the sub was recom- mended. At this time, an additional orga- nization was formed to assist with the preservation process. Created by the

Hunley Commission was a non-profit organization called Friends of the Hun- ley, whose main mission was to finish off what the vessel could never do, which was to complete its journey home.

With funding in place and the vessel's exact position pinpointed, the next task was assembling a team of divers and a project leader who would spearhead the recovery process. Realizing the project's level of importance, the U.S. Navy tapped its chief underwater archaeolo- gist, Dr. Robert S. Neyland, to serve as project director for the Hunley's raising.

Neyland, who is head of the Underwater

Archaeology Branch at the Naval His- torical Center in Washington, D.C.,

Then: An artist's rendering of the Hunley, which sank on February 17, 1864 in Charleston Harbor.

All photos are © Friends of the Hunley.

Now: An underwater view of the Hunley as it appeared below the water's surface shortly before its raising occurred this summer. hired Claire Peachey, an archeologist/conservator there to work alongside him as project field conserva- tor. Peachey, who studied underwater archaeology at Texas A&M, has exten- sive experience in these types of dives, as she has previously worked in the

Mediterranean recovering a shipwreck that had occurred during the Bronze Age around 1,300 B.C. "The biggest question here is why did the Hunley sink," Peachey said. "Through our research and from the raising, we hope to determine that."

Peachey's work on the Hunley began in late 1999, where she and Dr. Neyland and other members of the diving team began fieldwork of collecting data on the sub. Peachey began diving to retrieve and process various artifacts that had been onboard the vessel. Through her dives, Peachey found hollow iron snorkel tubes. She also discovered some other pieces that may have been associ- ated with the sub's hull. According to

Peachey, most of the dives were con- ducted during the summer months so the team wouldn't get caught in the whirl- wind hurricane season that customarily pelts the Southern states with heavy wind and rains in the fall.

Diving 30 ft. (9.1 m) beneath the sur- face, Peachey would use a suction tube to remove some of the sediment that covered the Hunley so that the lifting equipment could be placed there. Some- times having to work in zero visibility trying to locate a sub that was literally buried in mud, Peachey kept her bear- ings by just going down beneath the sur-

LiquiSeal Purge Control is a fully integrated level sensor for liquid cargo/service tanks or for draft measurement. External mounting on the tank or at remote location. Rugged brass construction with pneumatic or two wire (4-20 mA) output.

Indicating Systems for the Marine and Offshore