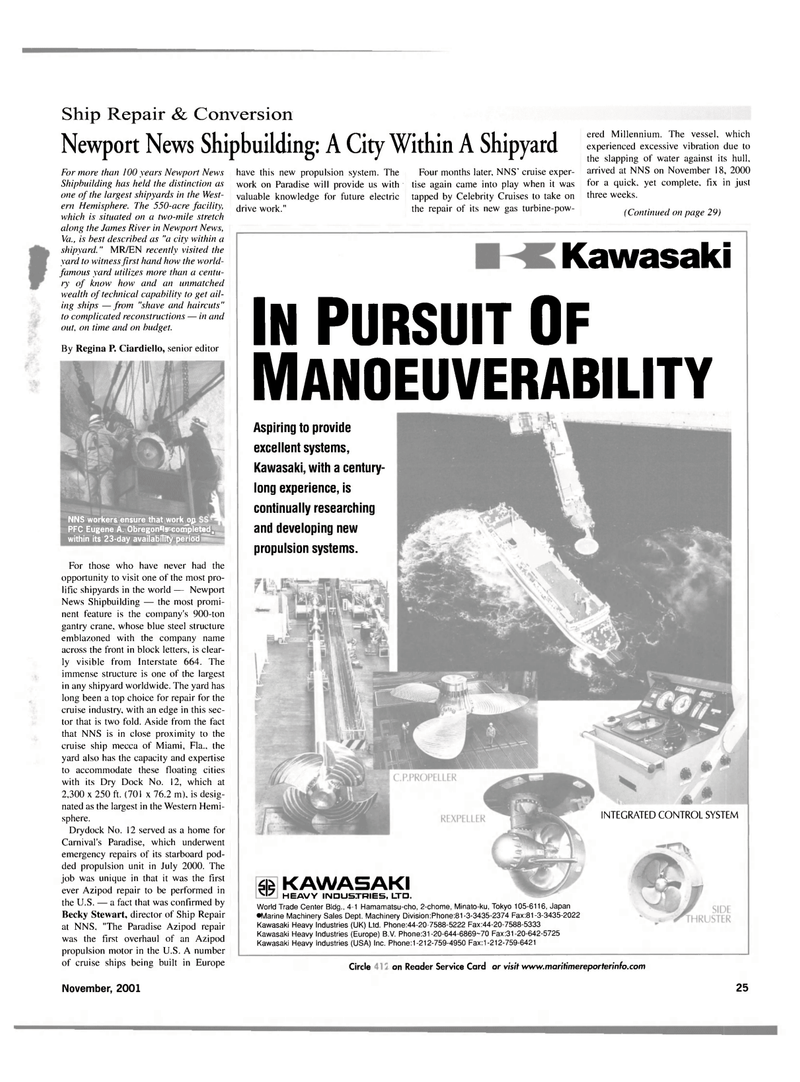 Newport News Shipbuilding: A City Within A Shipyard

For more than 100 years Newport News

Shipbuilding has held the distinction as one of the largest shipyards in the West- ern Hemisphere. The 550-acre facility, which is situated on a two-mile stretch along the James River in Newport News,

Va., is best described as "a city within a shipyard." MR/EN recently visited the yard to witness first hand how the world- famous yard utilizes more than a centu- ry of know how and an unmatched wealth of technical capability to get ail- ing ships —from "shave and haircuts" to complicated reconstructions — in and out, on time and on budget.

By Regina R Ciardiello, senior editor ered Millennium. The vessel, which experienced excessive vibration due to the slapping of water against its hull, have this new propulsion system. The Four months later. NNS' cruise exper- arrived at NNS on November 18, 2000 work on Paradise will provide us with tise again came into play when it was for a quick, yet complete, fix in just valuable knowledge for future electric tapped by Celebrity Cruises to take on three weeks, drive work." the repair of its new gas turbine-pow- (Continued on page 29)

News Shipbuilding — the most promi- nent feature is the company's 900-ton gantry crane, whose blue steel structure emblazoned with the company name across the front in block letters, is clear- ly visible from Interstate 664. The immense structure is one of the largest in any shipyard worldwide. The yard has long been a top choice for repair for the cruise industry, with an edge in this sec- tor that is two fold. Aside from the fact that NNS is in close proximity to the cruise ship mecca of Miami, Fla., the yard also has the capacity and expertise to accommodate these floating cities with its Dry Dock No. 12, which at 2,300 x 250 ft. (701 x 76.2 m), is desig- nated as the largest in the Western Hemi- sphere.

Drydock No. 12 served as a home for

Carnival's Paradise, which underwent emergency repairs of its starboard pod- ded propulsion unit in July 2000. The job was unique in that it was the first ever Azipod repair to be performed in the U.S. — a fact that was confirmed by

Becky Stewart, director of Ship Repair at NNS. "The Paradise Azipod repair was the first overhaul of an Azipod propulsion motor in the U.S. A number of cruise ships being built in Europe

PFC Eugene A. Obregon is completed, within its 23-day availability period $