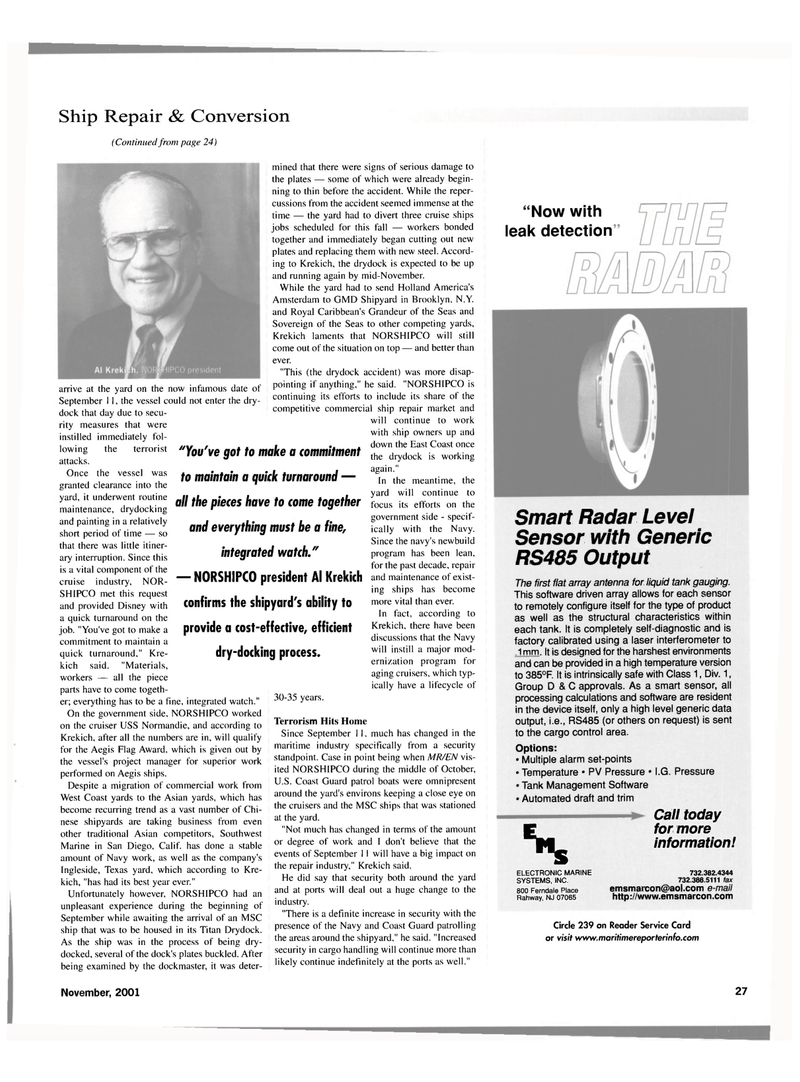 September 11, the vessel could not enter the dry- dock that day due to secu- rity measures that were instilled immediately fol- lowing the terrorist attacks.

Once the vessel was granted clearance into the yard, it underwent routine maintenance, drydocking and painting in a relatively short period of time — so that there was little itiner- ary interruption. Since this is a vital component of the cruise industry, NOR-

SHIPCO met this request and provided Disney with a quick turnaround on the job. "You've got to make a commitment to maintain a quick turnaround," Kre- kich said. "Materials, workers — all the piece parts have to come togeth- er; everything has to be a fine, integrated watch."

On the government side, NORSHIPCO worked on the cruiser USS Normandie, and according to

Krekich, after all the numbers are in, will qualify for the Aegis Flag Award, which is given out by the vessel's project manager for superior work performed on Aegis ships.

Despite a migration of commercial work from

West Coast yards to the Asian yards, which has become recurring trend as a vast number of Chi- nese shipyards are taking business from even other traditional Asian competitors, Southwest

Marine in San Diego, Calif, has done a stable amount of Navy work, as well as the company's

Ingleside, Texas yard, which according to Kre- kich, "has had its best year ever."

Unfortunately however, NORSHIPCO had an unpleasant experience during the beginning of

September while awaiting the arrival of an MSC ship that was to be housed in its Titan Drydock.

As the ship was in the process of being dry- docked, several of the dock's plates buckled. After being examined by the dockmaster, it was deter- mined that there were signs of serious damage to the plates — some of which were already begin- ning to thin before the accident. While the reper- cussions from the accident seemed immense at the time — the yard had to divert three cruise ships jobs scheduled for this fall — workers bonded together and immediately began cutting out new plates and replacing them with new steel. Accord- ing to Krekich, the drydock is expected to be up and running again by mid-November.

While the yard had to send Holland America's

Amsterdam to GMD Shipyard in Brooklyn. N.Y. and Royal Caribbean's Grandeur of the Seas and

Sovereign of the Seas to other competing yards,

Krekich laments that NORSHIPCO will still come out of the situation on top — and better than ever. "This (the drydock accident) was more disap- pointing if anything," he said. "NORSHIPCO is continuing its efforts to include its share of the competitive commercial ship repair market and will continue to work with ship owners up and down the East Coast once the drydock is working again."

In the meantime, the yard will continue to focus its efforts on the government side - specif- ically with the Navy.

Since the navy's newbuild program has been lean, for the past decade, repair and maintenance of exist- ing ships has become more vital than ever.

In fact, according to

Krekich, there have been discussions that the Navy will instill a major mod- ernization program for aging cruisers, which typ- ically have a lifecycle of "You've got to make a commitment to maintain a quick turnaround — all the pieces have to come together and everything must be a fine, integrated watch i." — NORSHIPCO president Al Krekich confirms the shipyard's ability to provide a cost-effective, efficient dry-docking process. 30-35 years.

Since September 11. much has changed in the maritime industry specifically from a security standpoint. Case in point being when MR/EN vis- ited NORSHIPCO during the middle of October,

U.S. Coast Guard patrol boats were omnipresent around the yard's environs keeping a close eye on the cruisers and the MSC ships that was stationed at the yard. "Not much has changed in terms of the amount or degree of work and I don't believe that the events of September 11 will have a big impact on the repair industry," Krekich said.

He did say that security both around the yard and at ports will deal out a huge change to the industry. "There is a definite increase in security with the presence of the Navy and Coast Guard patrolling the areas around the shipyard," he said. "Increased security in cargo handling will continue more than likely continue indefinitely at the ports as well." "Now with leak detection

This software driven array allows for each sensor to remotely configure itself for the type of product as well as the structural characteristics within each tank. It is completely self-diagnostic and is factory calibrated using a laser interferometer to .1mm. It is designed for the harshest environments and can be provided in a high temperature version to 385°F. It is intrinsically safe with Class 1, Div. 1,

Group D & C approvals. As a smart sensor, all processing calculations and software are resident in the device itself, only a high level generic data output, i.e., RS485 (or others on request) is sent to the cargo control area.