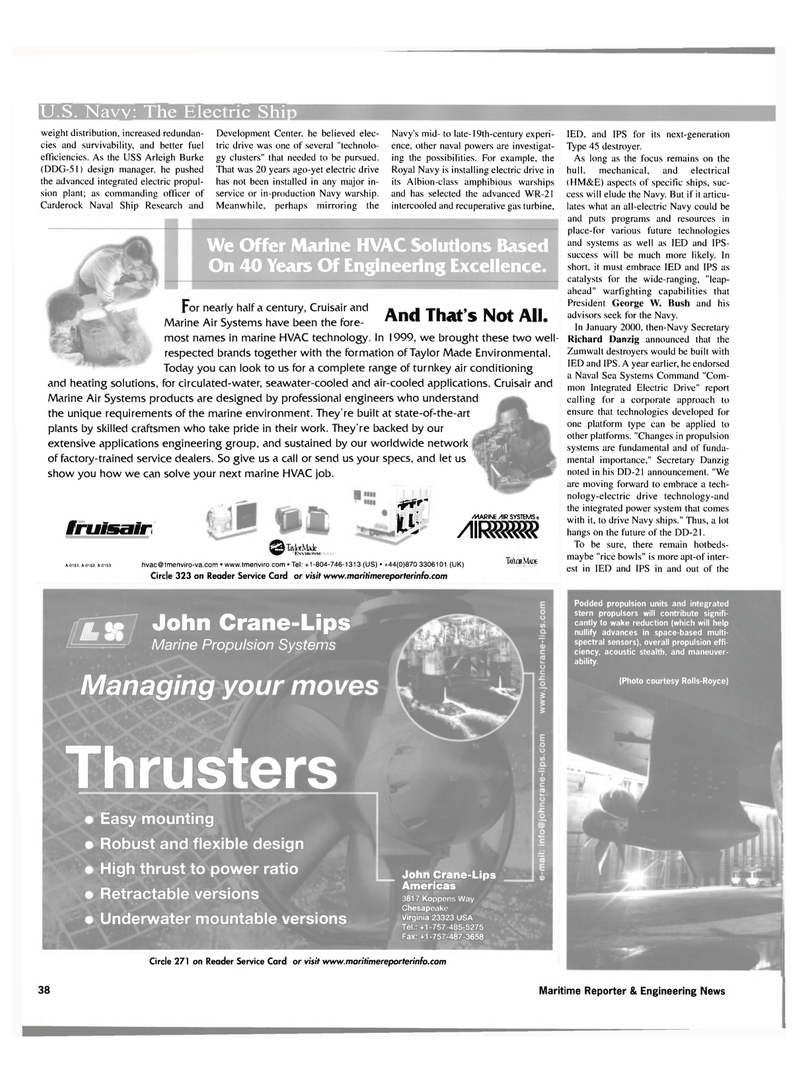 Development Center, he believed elec- tric drive was one of several "technolo- gy clusters" that needed to be pursued.

That was 20 years ago-yet electric drive has not been installed in any major in- service or in-production Navy warship.

Navy's mid- to late-19th-century experi- ence, other naval powers are investigat- ing the possibilities. For example, the

Royal Navy is installing electric drive in its Albion-class amphibious warships and has selected the advanced WR-21 intercooled and recuperative gas turbine.

We Offer Marine HVAC Solutions Based

On 40 Years Of Engineering Excellence.

And That's Not All. For nearly half a century, Cruisair and Marine Air Systems have been the fore- most names in marine HVAC technology. In 1999, we brought these two well- respected brands together with the formation of Taylor Made Environmental.

Today you can look to us for a complete range of turnkey air conditioning and heating solutions, for circulated-water, seawater-cooled and air-cooled applications. Cruisair and

Marine Air Systems products are designed by professional engineers who understand the unique requirements of the marine environment. They're built at state-of-the-art plants by skilled craftsmen who take pride in their work. They're backed by our extensive applications engineering group, and sustained by our worldwide network of factory-trained sen/ice dealers. So give us a call or send us your specs, and let us show you how we can solve your next marine HVAC job. fruisair r^fr'

IED, and IPS for its next-generation

As long as the focus remains on the hull. mechanical, and electrical (HM&E) aspects of specific ships, suc- cess will elude the Navy. But if it articu- lates what an all-electric Navy could be and puts programs and resources in place-for various future technologies and systems as well as IED and IPS- success will be much more likely. In short, it must embrace IED and IPS as catalysts for the wide-ranging, "leap- ahead" warfighting capabilities that

President George W. Bush and his advisors seek for the Navy.

Richard Danzig announced that the

Zumwalt destroyers would be built with

IED and IPS. A year earlier, he endorsed a Naval Sea Systems Command "Com- mon Integrated Electric Drive" report calling for a corporate approach to ensure that technologies developed for one platform type can be applied to other platforms. "Changes in propulsion systems are fundamental and of funda- mental importance," Secretary Danzig noted in his DD-21 announcement. "We are moving forward to embrace a tech- nology-electric drive technology-and the integrated power system that comes with it, to drive Navy ships." Thus, a lot hangs on the future of the DD-21.

To be sure, there remain hotbeds- maybe "rice bowls" is more apt-of inter- est in IED and IPS in and out of the