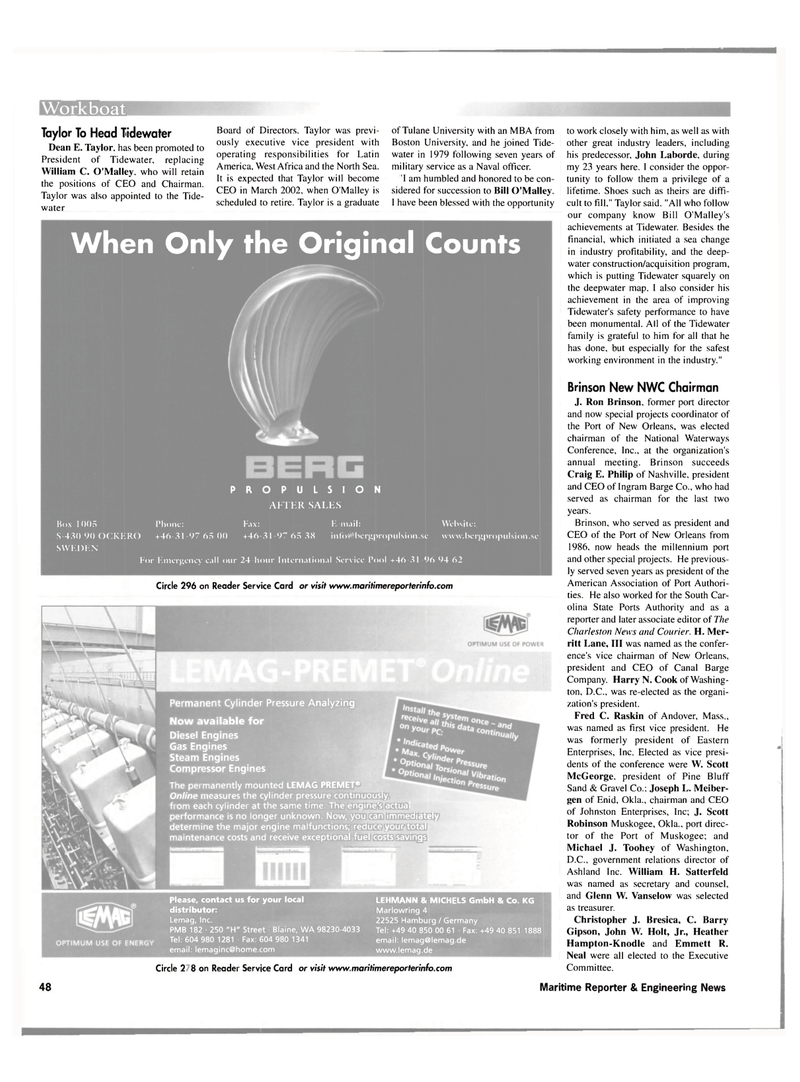 Dean E. Taylor, has been promoted to

William C. O'Malley. who will retain the positions of CEO and Chairman.

Taylor was also appointed to the Tide- water

Board of Directors. Taylor was previ- ously executive vice president with operating responsibilities for Latin

It is expected that Taylor will become

CEO in March 2002, when O'Malley is scheduled to retire. Taylor is a graduate of Tulane University with an MBA from

Boston University, and he joined Tide- water in 1979 following seven years of military service as a Naval officer. "I am humbled and honored to be con- sidered for succession to Bill O'Malley.

I have been blessed with the opportunity to work closely with him, as well as with other great industry leaders, including his predecessor, John Laborde, during my 23 years here. I consider the oppor- tunity to follow them a privilege of a lifetime. Shoes such as theirs are diffi- cult to fill," Taylor said. "All who follow our company know Bill O'Malley's achievements at Tidewater. Besides the financial, which initiated a sea change in industry profitability, and the deep- water construction/acquisition program, which is putting Tidewater squarely on the deepwater map, I also consider his achievement in the area of improving

Tidewater's safety performance to have been monumental. All of the Tidewater family is grateful to him for all that he has done, but especially for the safest working environment in the industry."

Craig E. Philip of Nashville, president and CEO of Ingram Barge Co., who had served as chairman for the last two years.

Brinson, who served as president and

CEO of the Port of New Orleans from 1986, now heads the millennium port and other special projects. He previous- ly served seven years as president of the

American Association of Port Authori- ties. He also worked for the South Car- olina State Ports Authority and as a reporter and later associate editor of The

Fred C. Raskin of Andover, Mass., was named as first vice president. He was formerly president of Eastern

Enterprises, Inc. Elected as vice presi- dents of the conference were W. Scott

Robinson Muskogee, Okla., port direc- tor of the Port of Muskogee; and

Ashland Inc. William H. Satterfeld was named as secretary and counsel, and Glenn W. Vanselow was selected as treasurer.

Neal were all elected to the Executive

When Only the Original Counts i