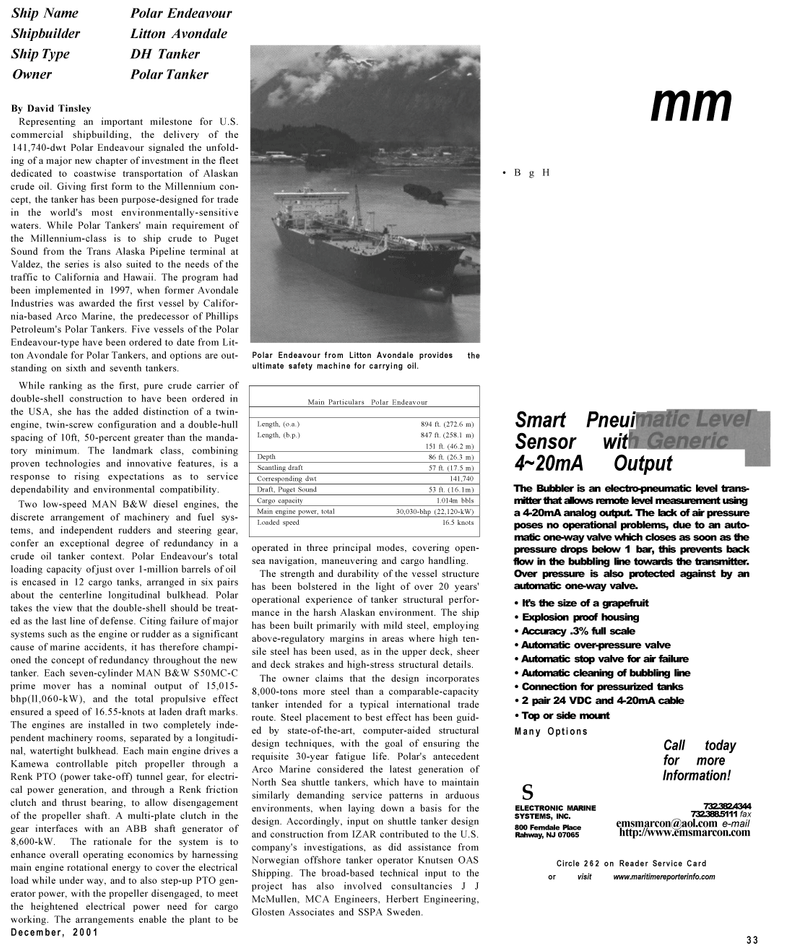 Representing an important milestone for U.S. commercial shipbuilding, the delivery of the 141,740-dwt Polar Endeavour signaled the unfold- ing of a major new chapter of investment in the fleet dedicated to coastwise transportation of Alaskan crude oil. Giving first form to the Millennium con- cept, the tanker has been purpose-designed for trade in the world's most environmentally-sensitive waters. While Polar Tankers' main requirement of the Millennium-class is to ship crude to Puget

Sound from the Trans Alaska Pipeline terminal at

Valdez, the series is also suited to the needs of the traffic to California and Hawaii. The program had been implemented in 1997, when former Avondale

Industries was awarded the first vessel by Califor- nia-based Arco Marine, the predecessor of Phillips

Endeavour-type have been ordered to date from Lit- ton Avondale for Polar Tankers, and options are out- standing on sixth and seventh tankers.

While ranking as the first, pure crude carrier of double-shell construction to have been ordered in the USA, she has the added distinction of a twin- engine, twin-screw configuration and a double-hull spacing of 10ft, 50-percent greater than the manda- tory minimum. The landmark class, combining proven technologies and innovative features, is a response to rising expectations as to service dependability and environmental compatibility.

Two low-speed MAN B&W diesel engines, the discrete arrangement of machinery and fuel sys- tems, and independent rudders and steering gear, confer an exceptional degree of redundancy in a crude oil tanker context. Polar Endeavour's total loading capacity of just over 1-million barrels of oil is encased in 12 cargo tanks, arranged in six pairs about the centerline longitudinal bulkhead. Polar takes the view that the double-shell should be treat- ed as the last line of defense. Citing failure of major systems such as the engine or rudder as a significant cause of marine accidents, it has therefore champi- oned the concept of redundancy throughout the new tanker. Each seven-cylinder MAN B&W S50MC-C prime mover has a nominal output of 15,015- bhp(ll,060-kW), and the total propulsive effect ensured a speed of 16.55-knots at laden draft marks.

The engines are installed in two completely inde- pendent machinery rooms, separated by a longitudi- nal, watertight bulkhead. Each main engine drives a

Kamewa controllable pitch propeller through a

Renk PTO (power take-off) tunnel gear, for electri- cal power generation, and through a Renk friction clutch and thrust bearing, to allow disengagement of the propeller shaft. A multi-plate clutch in the gear interfaces with an ABB shaft generator of 8,600-kW. The rationale for the system is to enhance overall operating economics by harnessing main engine rotational energy to cover the electrical load while under way, and to also step-up PTO gen- erator power, with the propeller disengaged, to meet the heightened electrical power need for cargo working. The arrangements enable the plant to be

The strength and durability of the vessel structure has been bolstered in the light of over 20 years' operational experience of tanker structural perfor- mance in the harsh Alaskan environment. The ship has been built primarily with mild steel, employing above-regulatory margins in areas where high ten- sile steel has been used, as in the upper deck, sheer and deck strakes and high-stress structural details.

The owner claims that the design incorporates 8,000-tons more steel than a comparable-capacity tanker intended for a typical international trade route. Steel placement to best effect has been guid- ed by state-of-the-art, computer-aided structural design techniques, with the goal of ensuring the requisite 30-year fatigue life. Polar's antecedent

North Sea shuttle tankers, which have to maintain similarly demanding service patterns in arduous environments, when laying down a basis for the design. Accordingly, input on shuttle tanker design and construction from IZAR contributed to the U.S. company's investigations, as did assistance from

The Bubbler is an electro-pneumatic level trans- mitter that allows remote level measurement using a 4-20mA analog output. The lack of air pressure poses no operational problems, due to an auto- matic one-way valve which closes as soon as the pressure drops below 1 bar, this prevents back flow in the bubbling line towards the transmitter.

Over pressure is also protected against by an automatic one-way valve. • It's the size of a grapefruit • Explosion proof housing • Accuracy .3% full scale • Automatic over-pressure valve • Automatic stop valve for air failure • Automatic cleaning of bubbling line • Connection for pressurized tanks • 2 pair 24 VDC and 4-20mA cable • Top or side mount