Read this page in Pdf, Flash or Html5 edition of May 2002 Maritime Reporter Magazine 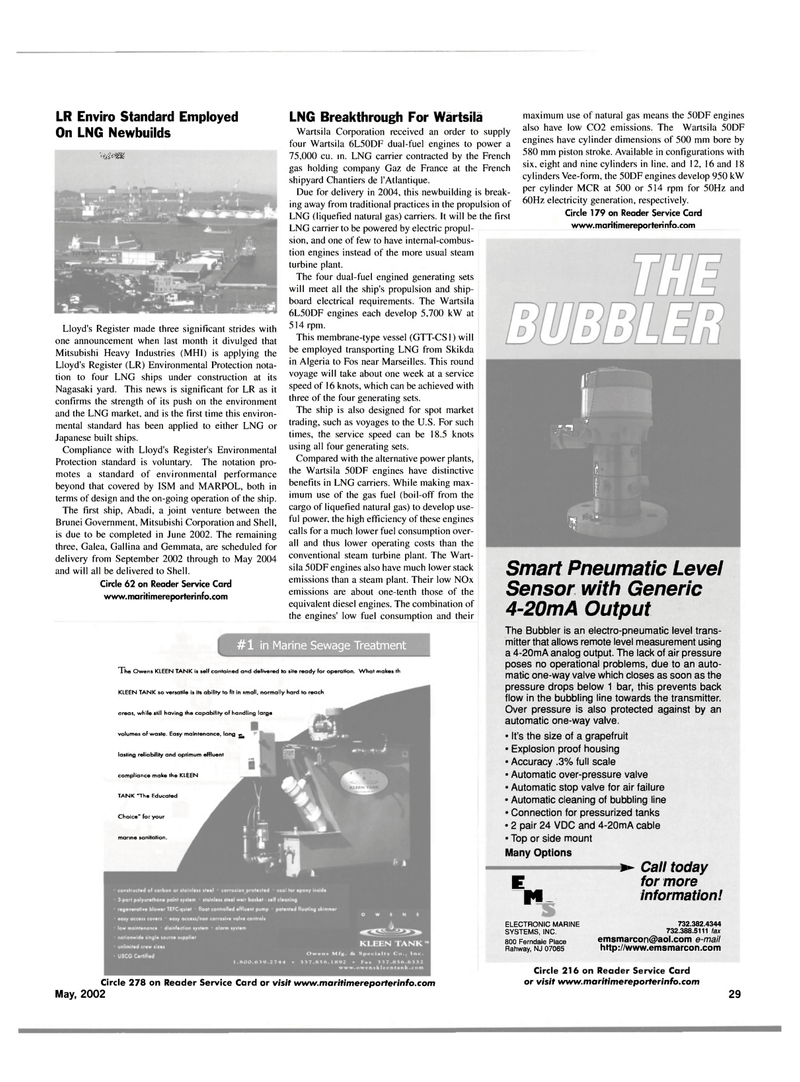 On LNG Newbuilds m j am

Nagasaki yard. This news is significant for LR as it confirms the strength of its push on the environment and the LNG market, and is the first time this environ- mental standard has been applied to either LNG or

Protection standard is voluntary. The notation pro- motes a standard of environmental performance beyond that covered by ISM and MARPOL, both in terms of design and the on-going operation of the ship.

The first ship, Abadi, a joint venture between the

Brunei Government, Mitsubishi Corporation and Shell, is due to be completed in June 2002. The remaining three. Galea, Gallina and Gemmata, are scheduled for delivery from September 2002 through to May 2004 and will all be delivered to Shell.

Due for delivery in 2004, this newbuilding is break- ing away from traditional practices in the propulsion of

LNG (liquefied natural gas) carriers. It will be the first

LNG carrier to be powered by electric propul- sion, and one of few to have internal-combus- tion engines instead of the more usual steam turbine plant.

The four dual-fuel engined generating sets will meet all the ship's propulsion and ship- board electrical requirements. The Wartsila 6L50DF engines each develop 5,700 kW at 514 rpm.

This membrane-type vessel (GTT-CS1) will be employed transporting LNG from Skikda in Algeria to Fos near Marseilles. This round voyage will take about one week at a service speed of 16 knots, which can be achieved with three of the four generating sets.

The ship is also designed for spot market trading, such as voyages to the U.S. For such times, the service speed can be 18.5 knots using all four generating sets.

Compared with the alternative power plants, the Wartsila 50DF engines have distinctive benefits in LNG carriers. While making max- imum use of the gas fuel (boil-off from the cargo of liquefied natural gas) to develop use- ful power, the high efficiency of these engines calls for a much lower fuel consumption over- all and thus lower operating costs than the conventional steam turbine plant. The Wart- sila 50DF engines also have much lower stack emissions than a steam plant. Their low NOx emissions are about one-tenth those of the equivalent diesel engines. The combination of the engines' low fuel consumption and their maximum use of natural gas means the 50DF engines also have low C02 emissions. The Wartsila 50DF engines have cylinder dimensions of 500 mm bore by 580 mm piston stroke. Available in configurations with six, eight and nine cylinders in line, and 12, 16 and 18 cylinders Vee-form, the 50DF engines develop 950 kW per cylinder MCR at 500 or 514 rpm for 50Hz and 60Hz electricity generation, respectively.

Th e Owens KLEEN TANK is self contained and delivered to site ready for operation. What makes th' [

The Bubbler is an electro-pneumatic level trans- mitter that allows remote level measurement using a 4-20mA analog output. The lack of air pressure poses no operational problems, due to an auto- matic one-way valve which closes as soon as the pressure drops below 1 bar, this prevents back flow in the bubbling line towards the transmitter.

Over pressure is also protected against by an automatic one-way valve. • It's the size of a grapefruit • Explosion proof housing • Accuracy .3% full scale • Automatic over-pressure valve • Automatic stop valve for air failure • Automatic cleaning of bubbling line • Connection for pressurized tanks • 2 pair 24 VDC and 4-20mA cable • Top or side mount

KLEEN TANK so versatile is its ability to fit in small, normally hard to reach areas, while still having the capability of handling large volumes of waste. Easy maintenance, long ^ lasting reliability and optimum effluent compliance make the KLEEN

Choice" for your marine sanitation.