Vosper Thornycroft Takes A "Bite" Out of Technology

Demonstrating a long-term commitment to its U.K. industrial base. Vosper Thornycroft is scheduled to start production next spring at a new, £40-million ($60-million) shipbuilding facility being created within the Portsmouth Naval Base.

The technologically advanced, undercover yard will cut its teeth on the Royal Navy's Type 45 destroyer program, constructing pre-outfitted blocks of up to 700-ton steelweight for ship assembly elsewhere in the U.K. at yards controlled by BAE Systems.

Described as a shipbuilding factory, in keeping with investments in state-ofthe- art production machinery and a layout and logistic arrangements conducive to high productivity, the Portsmouth facility will have the capacity to turn out mega-blocks of up to 6,000-tons, as envisaged for the RN's next generation of aircraft carriers.

Although the yard will initially comprise two, 426-ft. (130-m), fullyenclosed shipbuilding bays and a 10.000-sq.m. production hall, the site provides for subsequent expansion. The circumspect nature of the design project not only reflects Vosper Thornycroft's long-range view of the international naval market, but also its perception of opportunities in the commercial sector.

The Portsmouth factory is truly a milestone for the industry in the U.K.. where decades of contraction in shipbuilding have obscured the achievements and resilience of the remaining players.

Moreover, it will provide an outstanding example of the manner in which modern- day shipbuilding has embraced sophisticated technology, contrary to illconceived notions in western society of traditional industries being locked into outmoded ways of working and thinking.

"This facility will be among the most modern shipyards in the world," confirmed VT's CEO Martin Jay. "The processes will be highly automated and will enable us to make productivity advances that will help to secure further shipbuilding orders in the U.K. and in our export markets," he added.

Besides the installation of new, faster CNC laser plate cutting machinery and a steel panel line with 10 workstations and a semi-automatic, single-sided seam welder, equipment will be transferred from VT's current, main shipbuilding yard at Woolston, Southampton, which is to cease shipbuilding. Much of the advanced manufacturing wherewithal will be concentrated in the steel production hall, which will focus on cutting, profiling and fabrication activities.

(130-m) shipbuilding bays will be established on an area prepared by infilling an existing graving dock, and will have the potential for extension by a further 230- ft. (70-m). Moreover, the site could be augmented with a third newbuild berth, by infilling another, adjoining drydock to create a bay up to 623 ft. (190 m).

In the initial configuration, the two shipbuilding bays will be complemented by the availability of at least one drydock specifically for outfitting.

Portsmouth's debut contract for work on the first six Type 45 destroyers will be worth in excess of £200-million ($300-million) to VT, through its involvement in the design and support as well as production stages of the project.

The blocks to be supplied will comprise the bow section, funnel and masts, it is planned that the class will eventually consist of up to 12 ships. 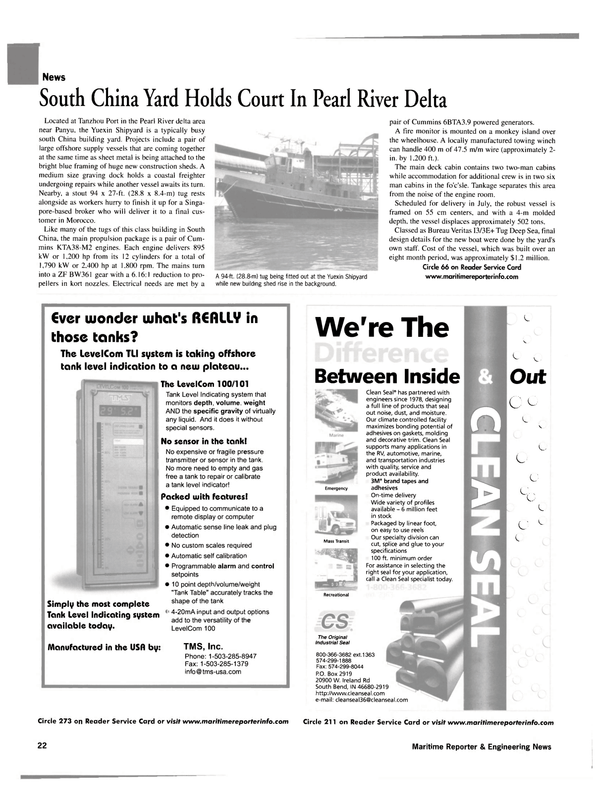 Read Vosper Thornycroft Takes A "Bite" Out of Technology in Pdf, Flash or Html5 edition of August 2002 Maritime Reporter