(Circle Line) for a 143-ft. (43.5-m) passenger catamaran, which will be the first aluminium highspeed vessel for this operator and the third contract Austal USA has secured for the New York area in the last six months. When delivered in late June 2003, it will be part of an association between New York State and the Austal Group with the 136-ft.

(41.4-m) Cloud Nine dinner cruise vessel being delivered by Austal USA in the previous month and the delivery the following month of a 280-ft. (85.3- m) High Speed Catamaran into Rochester, N.Y. by Austal Ships of Australia.

Capable of 29 knots and with the capacity for 600 passengers, the new vessel has been developed through close co-operation between Austal USA and Circle Line and will expand their harbor sightseeing cruises, evening charters and longer distance runs.

The catamaran's interior incorporates numerous features that will enable Circle Line to quickly change the configuration for these different operating modes. Power for the vessel will be supplied by four Cummins KTA38M2 diesel engines, each coupled to a Hamilton 571 waterjet through a Reintjes WVS 440 reversing gearbox.

This configuration allows the catamaran to be operated with either two or four engines, giving the vessel two distinct service speeds to match its varied operating profiles.

The vessel is scheduled to enter service in early July 2003, and Circle Line has an option to purchase a second vessel. 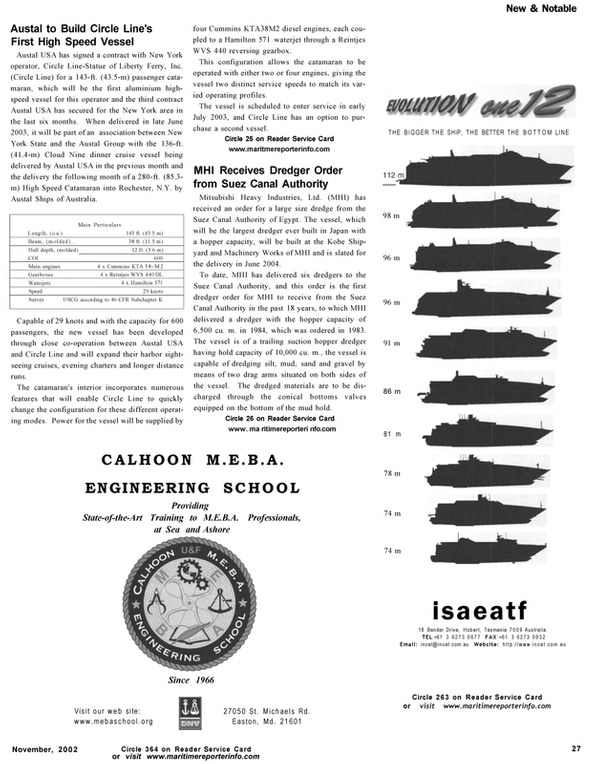