A device that increases the efficiency of barges is gaining in popularity on the West Coast, especially for Seattle to Alaska and Southeast Alaska runs.

Many people report that Hydralift skegs substantially increase the efficiency of towed barges. This results in either increased towing speed or reduced fuel consumption because the horsepower required to tow at the same speed decreases.

The Lynden Companies, Alaska Railbelt Marine (ARM) and Alaska Marine Lines (AML), have several barges with Hydralift skegs and another currently under construction. They are using the barges on Seattle to Alaska runs and runs within Southeast Alaska. According to George Williamson, Senior Port Engineer for ARB, AML, and Bering Marine Corp., the Hydralifts "seem to be [work] as advertised," which is "increase the [towing] speed or reduce the fuel burned." Western Towboat Company, Inc., which does all the towing for ARM and AML, has two gravel barges with Hydralift skegs themselves. They use them on all sorts of runs, including a weekly Seattle to Victoria run. Northland Services, Inc, has two barges, which are pulled by Dunlap Towing, on Seattle to Southeast Alaska runs. Foss Maritime has one barge they use for Prince Rupert to Whittier service. There is even one use by Young Brothers in Hawaii. Seaspan International still use one of the three first built, and in fact was one of the original users of barges with the Hydralift skegs.

Hydralift skegs were invented by Joe Gruzling, president of Nautican Research and Development Ltd. in Vancouver Canada, 20 years ago. In general, skegs are required so a barge will track straight. Just like regular skegs on barges, there are two Hydralift skegs per barge, one on each side-port and starboard, located under the rake. Unlike a regular skeg, which is like a long single hydrofoil, each Hydralift skeg is made up of three narrow foils supported by a horizontal foil that holds the vertical ones in place. The vertical ones are angled inwards, similarly to a normal skeg, while the horizontal foil is angled downward, almost at the same angle as the rake. 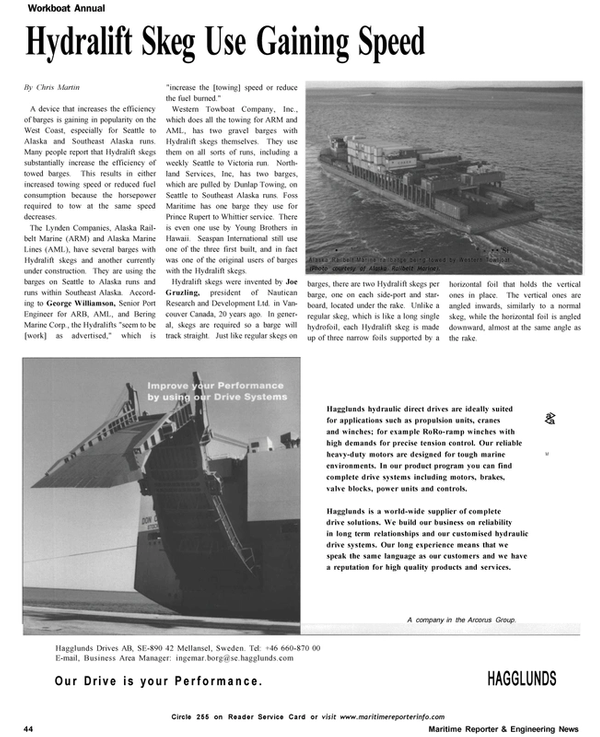