The NewiIMdlTreaty to Ban TBT

By Dr. Michael A. Champ

The Diplomatic Conference held (October 1-5, 2001) by the International Maritime Organization (IMO) in London adopted the Draft Convention prepared by The Marine Environmental Protection Committee (MEPC) of IMO for the "Control of Harmful Anti-fouling Systems for Ships." The Convention has been developed to immediately ban the use of Tributyltin (TBT) globally in antifouling paints to "protect the marine environment".

The ban on TBT has come about because TBT has detrimental effects on non-target marine organisms. In November 1999, IMO agreed that a Treaty be developed by the MEPC to ensure a ban on the application of TBT based antifouling paints by January 1, 2003, and a total ban on the use of TBT by January 1, 2008. The Convention will prohibit the use of harmful organotins in anti-fouling paints used on ships and establish a mechanism to prevent the potential future use of other harmful substances in anti-fouling systems (www.imo.org).

If the TBT Treaty Enters into Force as proposed, the future cost of removal, treatment and disposal of spent antifouling TBT paint residues from ships in shipyards and drydocks and if not ther, then the subsequent cost for removal, treatment and disposal of TBT contaminated dredged material from harbors and waterways could increase significantly: an estimated 12 to 15 times.

A key question is: who is liable for these additional costs? In the U.S., only the state of Virginia has discharge regulations (50 part-per-trillion) for TBT in washdown and hydroblast wasters from shipyards and drydocks. When a ship is first placed in a drydock, the vessel is washed down with freshwater to remove salt and prevent corrosion. This washwater is discharged directly to local rivers, estuaries or bays. The hydroblasting can break up the removed paint into paint chips into 10-micron size particles, which can be widely distributed in waterways. Over the past few years, this hydroblasting has become the preferred method to remove antifouling marine coatings (paints) from a ship's hull because of the human health risks from breathing sand blasted materials. Without national regulations on discharge requirements, this practice will continue and significantly increase between 2003- 2008 as a result of the Treaty. Contaminated washdown (salt and slime removal) wastewaters from a large ship can exceed 100,000 gallons Hydroblasting (for total paint removal) wastewater from the same ship can exceed an additional 400,000 gallons.

Rainfall runoff alone in a drydock can reach 20,000 gallons. Monitoring studies in the U.S. and U.K. have demonstrated that shipyards and drydocks that remove spent TBT are the current major source of unregulated TBT in the marine environment.

Regulation of Shipyards and Drydocks At MEPC 46 [a meeting of the IMO Marine Environmental Protection Committee held in London on April 23 through 27, 2001 ], a group of Delegations [Cyprus, Brazil, Denmark, Liberia, Marshall Islands and Vanuatu (formerly New Hebrides)] stressed the need for language in the treaty requiring safe removal, treatment and disposal of TBT from ships. Subsequently in Plenary, the delegates then instructed the drafting committee to include a new article to regulate the "application or removal of anti-fouling systems" that are banned, requiring that they be "collected, handled, treated and disposed of in a safe and environmentally sound manner to protect the environment and human health". For most of the world, TBT in washdown and shipyard wastewaters can legally be discharged directly into local waters. In some places the discharge from the shipyard is routed through (ineffectively) a municipal waste treatment plant (WWTP).

At MEPC meetings, serious concern was expressed by some experts for the need to identify in the Treaty the necessary regulatory language for: (1) the "safe" removal, treatment, and disposal of "spent" marine antifouling paints (coatings) deemed "harmful" by the Treaty to also "protect the marine environment", and (2) who is liable for the future costs of dredging and disposal of TBT-contaminated port and harbor sediments dredged materials.

The requirement for "safe" removal and disposal was subsequently incorporated at MEPC 46 as Article 5 in the Treaty, without it shipyards complying with existing national and local discharge regulations (most have none for the discharge of TBT) could inadvertently release more TBT to ports and harbors in the five-year compliance period than has been leached from ships (hulls) in the past 40 years to the same waters. A future concern of ports and harbors may be the liability for costs associated with the treatment and disposal of dredged sediments that are contaminated with TBT, which has not been addressed.

Treatment of TBT Contaminated Waste Over the past four years, the U.S.

These studies have found that washdown (salt removal) and hydroblast (paint removal) wastewaters in shipyards can contain up to six million parts per trillion TBT. In Virginia, this wastewater is treated to remove TBT from shipyard discharges. Researchers at Old Dominion University have demonstrated that off-the-shelf waste treatment technologies were not satisfactory for the treatment and removal of TBT in these wastewaters. In addition, U.S., Australian, U.K. and Swiss studies to remove TBT and other metals from wastewaters have found that advanced technologies not commonly utilized in normal sanitary treatment plants are required to remove TBT.

Studies conducted by EPA, U.S. Navy, UK DOE and the Consortium of Organotin Manufacturers Association (ORTEPA) have recorded declining levels of TBT worldwide, yet documented 'hot spots' of TBT in bottom sediments in the proximity of shipyards, drydocks, marina's, ports and harbors.

Costs An example of how contamination can increase the costs for disposal of dredged material is seen in the two alternatives available to the Port of NY/NJ.

The Mud Dumpsite, located three miles offshore, has been operational for many decades and has been the traditional disposal area that can accept clean dredged materials. Contaminated "spoils" have to be disposed of at an upland hazardous waste disposal facility. From 1977 to 1991, 90 percent of all NY/NJ dredge spoils were tested and classified, as clean spoils and only one to two percent were contaminated spoils. However, in 1991 the U.S. EPA required bioassay testing. This increased the volume of contaminated spoils.

For contaminated dredged material, the currently available alternative is upland disposal at a hazardous materials storage facility and none are available in the near vicinity. Howland Hook Terminal in Staten Island shipped 150,000 cu.

yd. of sediment via barge and rail to Utah at a cost of $17 million or over $110/ cu. yd. Traditional fees for dumping dredge materials at the Mud Dumpsite at this time were in the area of $10/ cu. yd.

Therefore, concern was expressed over the need to identify regulatory language within the Treaty itself for the "safe" removal, treatment and disposal of TBT from ships, and clarification on the issue of liability of future dredging and disposal of TBT-contaminated port and harbor sediments. Under current regulatory practices for most of the world, TBT in washdown wastewaters can be discharged directly into local waters.

It is quite possible that the "regulated" nations can quickly implement new requirements to correct this situation.

This implementation will result in the transfer TBT contamination to the "unregulated" countries, which are least able to deal with it. However, at IMO, there is a concern that unregulated countries may unknowingly accept the environmental and human health risks to gain economic benefits from removing TBT from ship's hulls. Market forces are selective for low-cost labor and weak environmental regulation. Unfortunately, most of these developing countries do not have the funding or environmental expertise available for the monitoring, research and technology development essential to treat and dispose TBT washdown wastewaters safely. These activities would defeat the purpose of the Treaty, which is to provide standardized global regulation and ensure that shipowners do not face multiple, fragmented and counter productive national regulations.

It has been estimated that between 70 to 80 percent of the 28,038 ships in global commerce use TBT. Under current practices, the estimated annual increase in wastes in shipyards and drydocks from the Treaty will be: 2.3 million tons of contaminated grit, 18,000 tons of spent paint, 1.8 million paint cans, and 1.1 billion gallons of contaminated washwater (low pressure for salt removal), and if the trend increases of using high pressure hydroblasting to remove spent paint, the volume of wastewater could exceed 5 billion gallons of water needing treatment.

Before the language of the Treaty is ratified, member nations should be aware of the need for regulating the removal and treatment of the spent paint (with biocides) in shipyards by each Member State (Contracting Parties to the Convention) and the permitted discharge limits for treated liquid wastes. In addition, where port and harbor bottom sediments contain TBT's, either from past activities or from paint removal in compliance with the treaty, port authorities would benefit also from defining who is liable for the increased costs for special dredging and treating of the TBT contaminated dredged material.

A Conference was recently held at the Technical University of Denmark in Lyngby, Denmark to bring together researchers on "Environmental Aspects of Handling Heavy Metal and TBT-Polluted Harbor Sediment." International experts indicated that a cost-effective system for remediation of persistent TBT (mostly paint chips) in contaminated bottom sediments might not be available for several years. Without incorporation of Article 5 in the treaty, shipyards complying with national and local discharge regulations could inadvertently release more TBT to ports and harbors in the fiveyear compliance period than has been released from ships (hulls) in the past 40 years to the same waters. This would be devastating to the marine environment.

Liability When the IMO "TBT Treaty" enters into force, it will be implemented to remove the TBT from ships to protect the marine environment. The regulatory gap between removal and disposal may contaminate more port and harbor bottom sediments. Consequently, both shipyards and drydocks and ports and harbors (who had nothing to do with the Treaty) could be at risk for the liability of treatment and disposal of spent antifouling (TBT) paint residues and subsequent highly (TBT contaminated) bottom sediments in special landfills. The key question then becomes who is liable for the costs of removing and disposing these TBT contaminated spent antifouling paint residues and TBT contaminated dredged materials: shipowners, shipyards, or port and harbor authorities or the paint companies?

Costs today for just dredging and disposal in a toxic and hazardous landfill have been estimated to be greater than $ 150 per cu. yd. ... more than 10 times the current costs ... and could be significantly greater if contained dredging is required and depending on the availability and location of nearby toxic and hazardous waste landfills and location of sensitive environmental resources in adjacent bays and estuaries. Current waste treatment technology is NOT available for treating TBT contaminated dredged materials, however a few studies are underway to develop them.

Regulation of "Contaminants" in Dredged Materials Under Annex I of the London Dumping Convention, Contaminants in dredged materials can be ocean dumped if they are not greater than trace background levels, and not be Persistent, Toxic or Bioaccumulate.

As the IMO TBT Treaty is ratified by Member Nations, Port and Harbor Authorities to determine their risks and liabilities from TBT contaminated dredged materials may wish to privately conduct risk assessments to determine the degree and extent of TBT contamination in their waterways and begin to give serious consideration to developing special toxic and hazardous material storage areas which could serve as immediate storage for TBT contaminated dredged materials until suitable technologies can be developed to treat them. 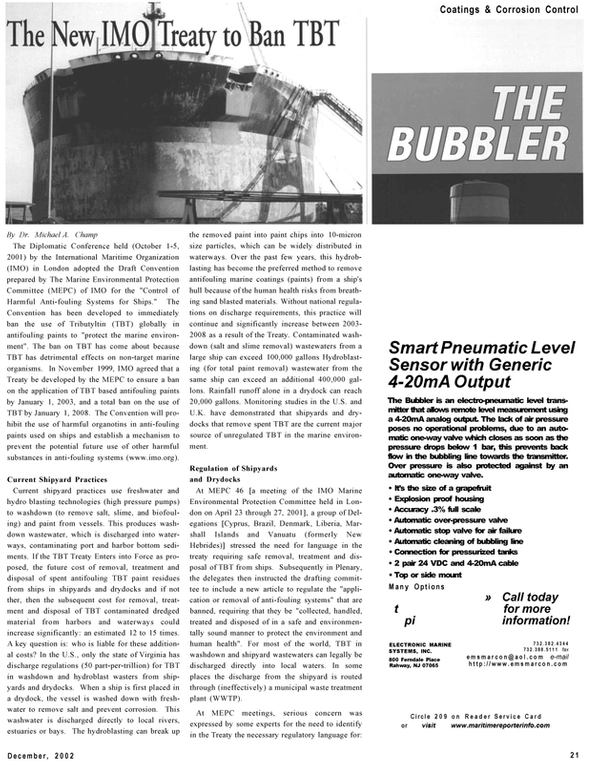 Read The NewiIMdlTreaty to Ban TBT in Pdf, Flash or Html5 edition of December 2002 Maritime Reporter