Wartsila Corporation and Mitsubishi Heavy Industries (MHI) will together develop a new 500-600 mm cylinder bore engine, with the ambitious goal of having the first unit ready for delivery in 4Q 2004. The development perhaps ushers in a new era of cooperation amongst major equipment suppliers, which continually search for innovative means to keep product lines up to date while simultaneously keeping a lid on soaring new product development costs. According to Mikael Makinen, Wartsila group vice president, Marine Division, the development costs for the engine will be shared equally, and the engine will be marketed and sold separately, branded with both the Mitsubishi and Sulzer name.

"We see in the market that we (Wartsila and MHI) are complementing each other rather than competing," Makinen said. A collaboration of this scale is not unprecedented, as Wartsila and Cummins formed and eventually dissolved a similar relationship in which the companies sought to develop and sell a smaller engine range.

"We learned a lot from that experience," Makinen said. "First, it has to be very clear on who is responsible for what... and it helps if the partner companies have a similar philosophy." Past disappointments notwithstanding, Makinen is confident of success with the much larger Japanese partner, which is nearly 10 times larger than the Finnish company with a nearly $22.1 billion turnover versus Wartsila's $2.4 billion turnover. In fact, Makinen admits that the intention of the new partnership is to develop more than just one engine, though nothing is confirmed past the initial engine.

The low speed marine diesel engine will have a 500-600 mm cylinder bore, and will be targeting a wide variety of ships, including Handymax and Panamax bulk carriers, large product tankers, container feeder vessels and medium-sized reefer ships.

Both companies currently manufacture a range of low-speed marine diesel engines, with Wartsila's Sulzer range covering the 5,000 to 80,000 kW range, and Mitsubishi's UE engines covering the 1,120 to 46,800 kW range. While Makinen did not suggest the new unit will directly replace a Sulzer engine, he did say that the Sulzer 52 UB is one of the oldest engines in the brand's range, and he envisages it being around for another 10 years. 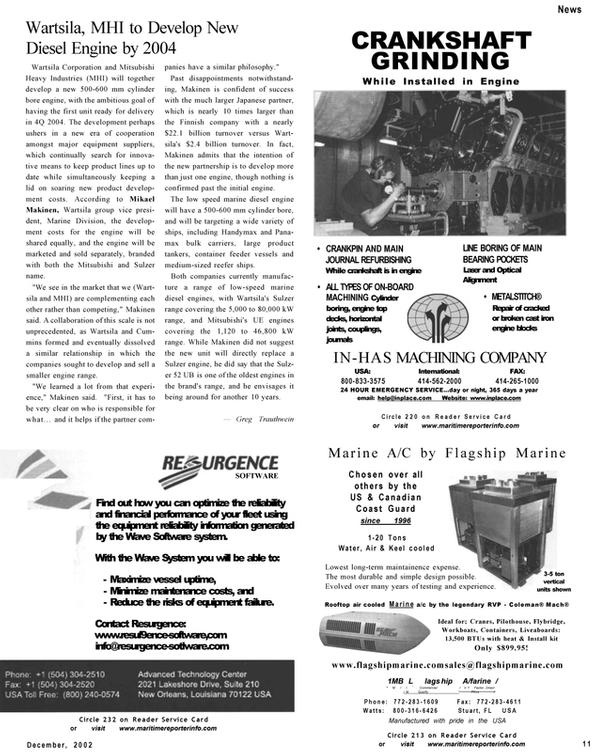