The push for a new class of U.S. Navy ships, vessels able to operate in shallow draft, near to shore environments, has taken a step closer to reality. The Navy is currently reviewing plans from half a dozen teams, and is expected next month to award additional dollars to three teams for further refinement.

Current plans call for a fleet of between 50 and 70 vessels — smaller, faster and considerably cheaper than ships built for today's Navy — ready for production in the next few years.

The concept for Littoral Combat Ships, or LCS, is hardly new, and was a topic of hot debate at the AFCEA West 2003 exhibition and conference. With a distinguished and varied panel of Admirals and Generals, and a packed crowd including a cross section from the World War II generation to Generation X, the topic "What Do We Want Our Ships To Do?" was debated, oftentimes in a heated fashion.

Truver and discussed by many, including VADM Alexander Krekich. USN (Ret), President and CEO of Norfolk Shipyard and Drydock Corp., and RADM George R. Worthington, USN (Ret), former Commander, Naval Special Warfare Command, the discussion started and ended with LCS ... the Littoral Combat Ship. Just last month Lockheed Martin and Blohm + Voss announced an agreement (signing pictured above) to work together in providing the U.S. Navy with a Littoral Combat Ship (LCS) solution capable of meeting the stated requirements of speed, range, payload, cost, capability, survivability and supportability. The agreement, in the form of a memorandum of understanding, calls for a continuance of the relationship established between both companies for the Navy's ongoing Ship Concept Studies.

LCS, a transformational new ship class for the Navy, will be expected to engage numerous threats in the littoral environment, the most significant of which include diesel submarines, small boats engaging in swarm warfare, and mines. A key element to the overall ship design will be the development and integration of different modules, easily interchanged with LCS, to address the various threats in the littorals. Dale Bennett, Lockheed Martin NE&SS-Marine Systems vice president and general manager, said "Blohm + Voss understood the need for modularity in ship design and integration as early as the 1970s, by developing flexible mission modules that provide for ease of spiral upgrades to systems over time. This approach to modular ship design resulted in the extremely popular MEKO-class ships, found in 11 navies worldwide today." Dr. Reinhard Mehl, Blohm + Voss executive board member, concurred: "We have learned many lessons along the way in refining the MEKO design that we expect to be of great significance for our LCS to be of great significance for our LCS efforts." 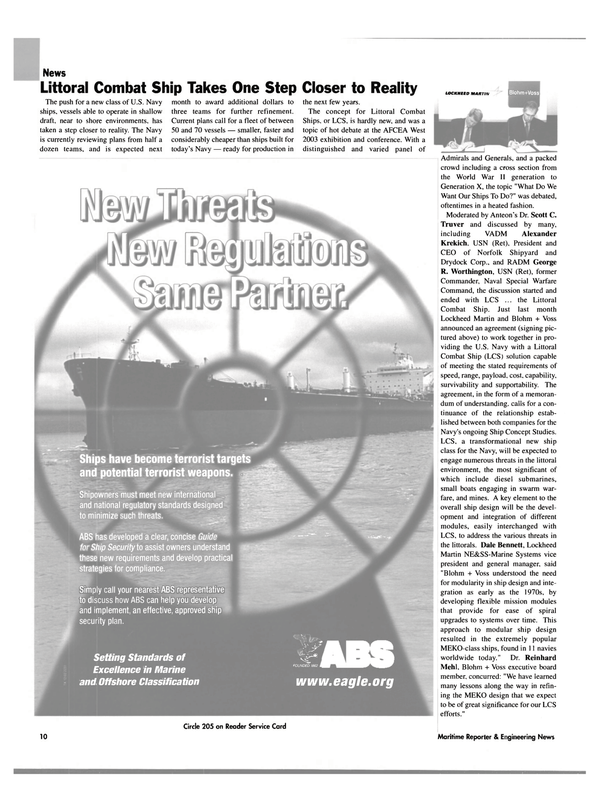