Piikkio Works OY, an company 100 percent Kvaerner Masa Yards, independent maintaining a technical and design owned by advantage in the construction, delivery prides itself on and installation of prefabricated cabins for cruise ships. Bringing the saying "plug and play" to an entirely new level, the company coordinates nearly 150 subcontractors to design, build and deliver on-time, on-budget - up to 6,000 complete suites and staterooms per year.

Piikkio Works is owned by Kvaerner Masa Yards, and perhaps no greater testament to its system is needed than to note that its cabins are used by a host of other cruise ship builders, most notably Germany's Meyer Werft. With Kvaerner Masa Yards now under the Aker Kvaerner umbrella, it would seem that the many Aker yards that build cruise and passenger vessels would take advantage of the Piikkio Works system.

While Piikkio Works recorded a record turnover of more than $100 million in 2001, supporting its operations in Finland and abroad, it anticipates a turnover of approximately $60 million in 2003, with projections for 2004 and beyond quite cloudy, given the current cruise ship new construction hold. However, with its wide use of subcontractors, the manufacturer insists that the immediate effects of such a drop are minimal, though it (and many of its colleagues) would prefer a swift reversal.

Through its 20 years of building and delivering prefabricated units to the major cruise ship builders of the world, Piikkio Works has developed a number of innovations and installation techniques which are geared toward minimizing work for the shipyard. It fabricates its own panels in-house, in standard 900 mm widths, and has a constant eye on methods to bring more of the shipbuilding process out of the shipyard. It's latest innovation, patent-pending, is the Panoramic Cabin.

A View to Thrill Piikkio Work's current line of modular cabins seems the ultimate in ease of installation, rolling onto ships, sans floors, and literally plugging into place. With its new Panoramic Cabin, a system yet to receive typeapproval, the process is taken a step further.

With its new cabin system, the company delivers units that plug into the side of the vessel, literally forming a part of the ship's side structure, complete with windows. The product allows installation of a cabin with one crane lift, and eliminates the need for window installation by the shipyard.

As its name suggests, the cabin offers passengers a fabulous, floor to ceiling, forward and side view of the scenery, an amenity that the manufacturer suggests will allow cruise lines to garner additional revenue.

While the new room does eliminate the balcony, it offers an additional two to four meters in the room, and would seem a natural fit for vessels that cruise in colder environs. Piikkio Works OY is currently working to develop the Panoramic Cabin with a balcony.

The concept was created primarily with the RoPax vessel type in mind, but its applicability to the cruise ship environment quickly became apparent. 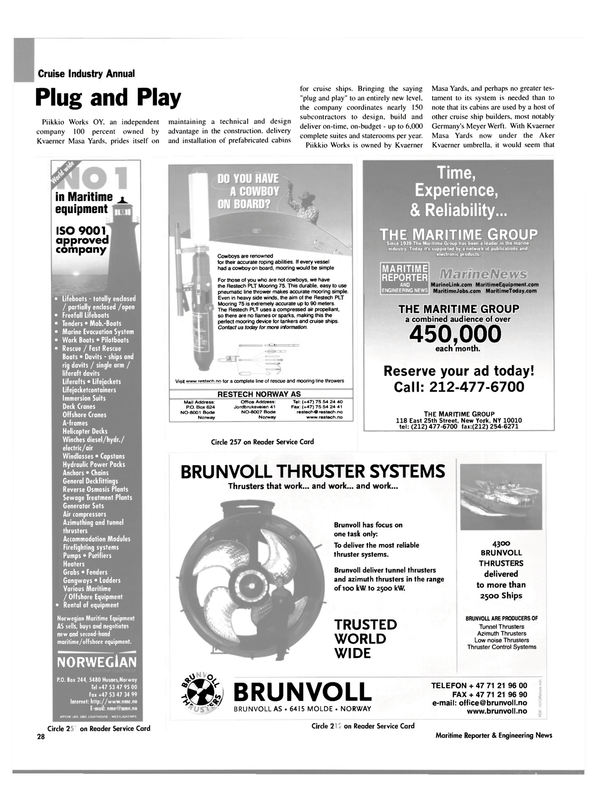