2002 will surely not be counted as "a banner year" for many, if any, industries, particularly not for the leisure and travel niche. The cruise industry survived a tough year, as terrorism, a shakey economy and sickness outbreaks onboard ships grabbed headlines. But it is important to note that the industry did survive. Cruise lines were not as profitable as years past, but last year's challenges present future opporunities.

By Regina P. Ciardiello, managing editor The end of 2002 closed out with a broken merger agreement between P&O Princess and Miami, Fla.-based Royal Caribbean, which, if completed, would have tallied up to a $6 billion operation.

Taking the industry surprise in November 2001, the two companies even managed to keep their trade secret from the industry's powerhouse — Carnival Corp. Admittedly not having any idea that the two lines planned to form RCP Lines, Carnival, for the next several months of 2002, worked diligently to convince, the management team at P&O Princess, namely CEO Peter RatclifTe; and CFO Nick Luff, that the better deal was with the company who seems to crank out a new "Fun Ship" as often as the sun shines in Florida. While it seemed at first that P&O was firm with its commitment with RCCL, the company eventually succumbed to the "lair of Carnival Corp." ultimately severing its tentative agreement with RCCL almost one year to the day that Ratcliffe stated just the opposite regarding a possible union with the line.

In an article published in the December 2001 edition of MR/EN (See "6 Billion Merger Tightens Cruise Industry, page 22), Ratcilffe reportedly said, "A combination with Carnival for virtually anyone in the industry is problematic because of anti-trust issues." On October 25, 2002, however, those words became a distant and virtually forgotten memory, when P&O announced its decision to sever its tentative agreement, as well as the future of RCP Lines.

Risking the threat of having to pay a $62.5-million break up fee (which P&O is expected to pay during Q4, according to P&O Princess Public Relations Manager, Caroline Keppel-Palmer), the company, which confirmed its decision at the start of the new year, decided to go with Carnival Corp. when the P&O board announced that it had recommended the Carnival DLC transaction.

Keppel-Palmer also mentioned that while P&O will be expected to pay the $62.5-million fee, the company was able to "exit the joint venture at no cost." Upon completion of this merger, P&O Princess will operate under the new name of Carnival U.K.

While the agreement between P&O and Carnival has been confirmed, it is not set in stone, as shareholder must now decide, a decision to be made at meetings to be held during the months of March and April. According to a statement issued by P&O Princess last month, the company's chairman. Lord Sterling, stressed that the line will undoubtedly seal the deal with Carnival Corp. "We (P&O Princess) have today (January 8, 2003), signed an agreement with Carnival to implement the DLC transaction." He continued: "We are recommending that shareholders approve the DLC transaction with Carnival at an EGM expected to be convened towards the end of March." Getting the Bugs Out Another issue that plagued the cruise industry at the end of this year was several instances of gastrointestinal viruses cropping up. Throughout the summer, and into the late fall, passengers leaving from various ships, would mysteriously begin to suffer from chronic vomiting and diarrhea after setting sail. It was later determined after full investigations by the Centers for Disease Control and Prevention (CDC) that these stricken passengers, most of whom boarded ships leaving from the Port Everglades, Fla., had been exposed to Norwalk Virus. The illness, whose symptoms include nausea, abdominal pain, as well as the chronic vomiting and diarrhea that had plagued the stricken passengers, was not being spread through food preparation, but rather through infected passengers and crew, who had already been exposed to the germ, and would then carry the virus onboard with them.

The highly-contagious virus, which did not favor one particular cruise line, cropped up on P&O's Oceana; Holland America's Amsterdam and Ryndam; Disney's Magic; Carnival's Fascination; and Radisson Seven Seas' Mariner.

Project America — The Saga Continues Just when it seemed that the end of this "project" had been finally put to rest, another issue arose. To refresh, the two vessel that were to comprise the nowdefunct U.S. Lines, were hyped by parent company American Classic Voyages (AMCV), as "The first U.S.-owned, operated and crewed cruise ships in 40 years." With the backlash of 9/11 and a sour economy, AMCV was forced to file for bankruptcy on October 19, 2001. leaving the hulls of the incomplete vessels to rust away at their builder, Northrop Grumman Ship Systems in Pascagoula, Miss. After much fanfare, Norwegian Cruise Lines, purchased the vessels, as well as all of the materials and equipment from the yard this past August, where everything remained until they were towed to Lloyd Werft in Germany.

The Bremerhaven-based yard is in the process of finishing the construction of the first Project America ship (scheduled for delivery in 2004), and is slated to complete the second vessel as well.

While it may sound as though this is just another vessel construction for NCL, it actually has caused headlines in recent weeks when Sen. Daniel Inouye, (D-Hawaii), announced his intention to "bring back" the vessels to the U.S.

Since the two cruise ships will be completed in a foreign yard and owned by a company whose parent is based in Malaysia (Star Cruises), technically according to the Jones Act, they would not be able to cruise between domestic ports. "This provision builds on the original Project America statute to allow a U.S. company employing American workers to operate those ships under U.S.-flag in Hawaii." Sen. Inouye said.

"I believe this is the best way to implement the original economic and national security goals of Project America, including the creation of approximately 9,000 jobs on and off the ships, and providing a needed boost to Hawaii's economy." With the intention to hopefully rebuild U.S.-flagged cruise vessels, Inouye also proposed to allow Norwegian permission to have the vessels fly the U.S. flag for the Hawaii trade. In addition, the new vessels are expected to create approximately 3,000 new jobs for Americans. The vessels must also abide by U.S. laws including taxation, labor and environmental laws and be owned by U.S. citizen corporations.

While Inouye is confident that his proposal will go through, one of his colleagues, Sen. John McCain (R-Ariz.) is less-than-thrilled by this legislation.

Known for his strong objections to the Jones Act, it would seem that McCain would welcome Inouye's proposal with open arms. But rather he is staunchly disagreeing with the Project America Provision, namely that an exception should not be made for just one company.

"As many of my colleagues know, 1 am no fan of the protectionist laws that require domestic cruise ships to be U.S.- owned, U.S.-built, U.S.-flagged and U.S.-crewed," McCain said. "However, I strongly object to waiving these laws for only one foreign-owned company." Proposing an amendment to strike the "special interest provision in the Omnibus," McCain's request was deemed unsuccessful since the Bill cleared the Senate on January 23, merely six days after Sen. McCain first announced his stance on this issue. 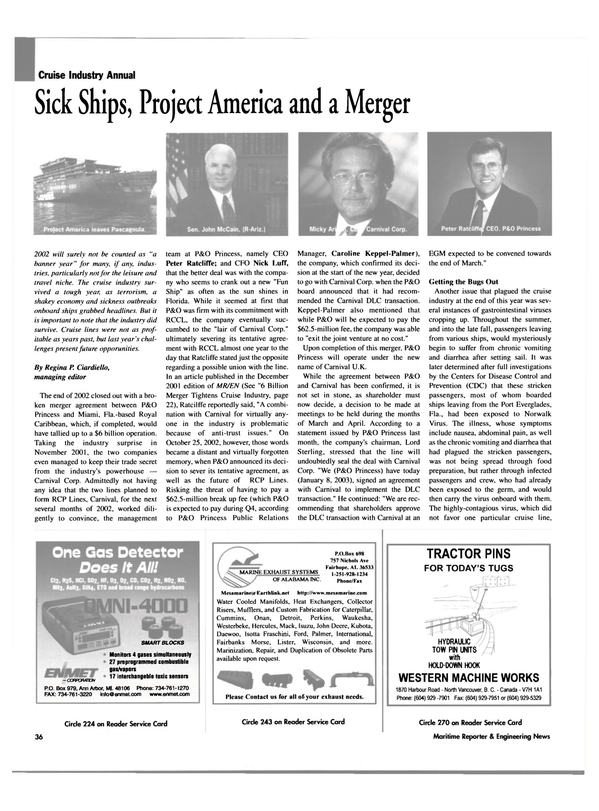