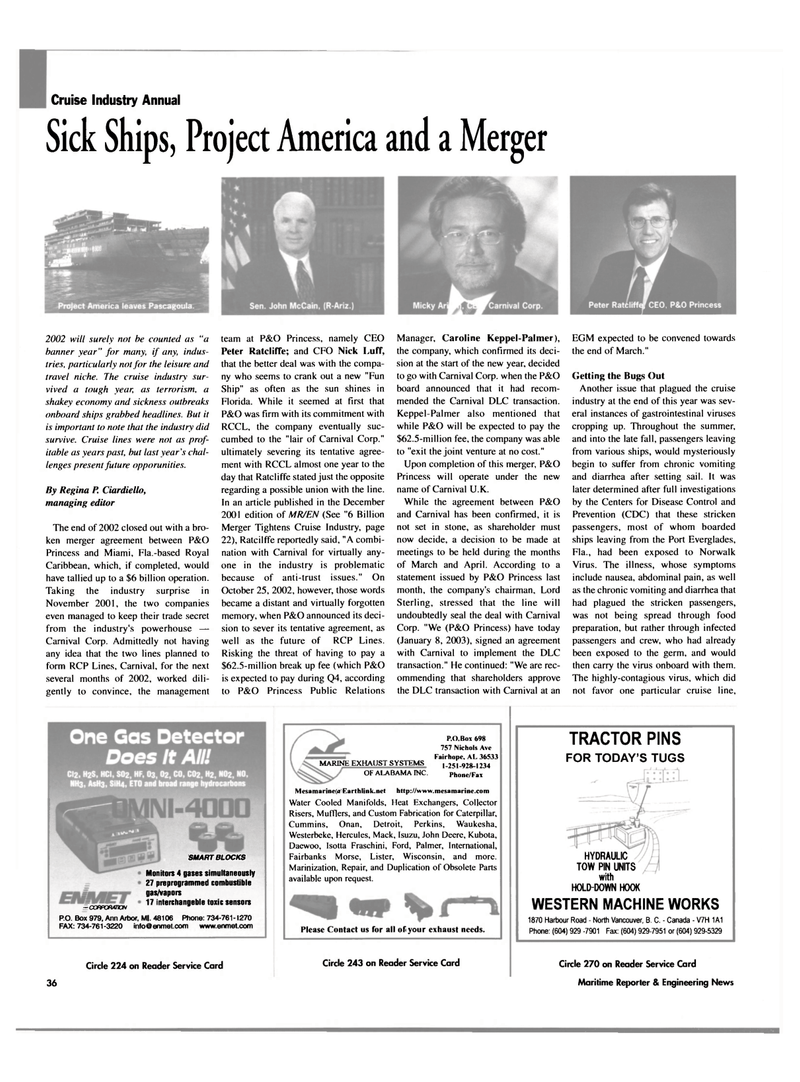 Sick Ships, Project America and a Merger 2002 will surely not be counted as "a banner year" for many, if any, indus- tries, particularly not for the leisure and travel niche. The cruise industry sur- vived a tough year, as terrorism, a shakey economy and sickness outbreaks onboard ships grabbed headlines. But it is important to note that the industry did survive. Cruise lines were not as prof- itable as years past, but last year's chal- lenges present future opporunities.

Caribbean, which, if completed, would have tallied up to a $6 billion operation.

Taking the industry surprise in

November 2001, the two companies even managed to keep their trade secret from the industry's powerhouse —

Carnival Corp. Admittedly not having any idea that the two lines planned to form RCP Lines, Carnival, for the next several months of 2002, worked dili- gently to convince, the management team at P&O Princess, namely CEO

Peter RatclifTe; and CFO Nick Luff, that the better deal was with the compa- ny who seems to crank out a new "Fun

Ship" as often as the sun shines in

Florida. While it seemed at first that

P&O was firm with its commitment with

RCCL, the company eventually suc- cumbed to the "lair of Carnival Corp." ultimately severing its tentative agree- ment with RCCL almost one year to the day that Ratcliffe stated just the opposite regarding a possible union with the line.

Merger Tightens Cruise Industry, page 22), Ratcilffe reportedly said, "A combi- nation with Carnival for virtually any- one in the industry is problematic because of anti-trust issues." On

October 25, 2002, however, those words became a distant and virtually forgotten memory, when P&O announced its deci- sion to sever its tentative agreement, as well as the future of RCP Lines.

Risking the threat of having to pay a $62.5-million break up fee (which P&O is expected to pay during Q4, according to P&O Princess Public Relations

Manager, Caroline Keppel-Palmer), the company, which confirmed its deci- sion at the start of the new year, decided to go with Carnival Corp. when the P&O board announced that it had recom- mended the Carnival DLC transaction.

Keppel-Palmer also mentioned that while P&O will be expected to pay the $62.5-million fee, the company was able to "exit the joint venture at no cost."

Upon completion of this merger, P&O

Princess will operate under the new name of Carnival U.K.

While the agreement between P&O and Carnival has been confirmed, it is not set in stone, as shareholder must now decide, a decision to be made at meetings to be held during the months of March and April. According to a statement issued by P&O Princess last month, the company's chairman. Lord

Sterling, stressed that the line will undoubtedly seal the deal with Carnival

EGM expected to be convened towards the end of March."

Getting the Bugs Out

Another issue that plagued the cruise industry at the end of this year was sev- eral instances of gastrointestinal viruses cropping up. Throughout the summer, and into the late fall, passengers leaving from various ships, would mysteriously begin to suffer from chronic vomiting and diarrhea after setting sail. It was later determined after full investigations by the Centers for Disease Control and

Prevention (CDC) that these stricken passengers, most of whom boarded ships leaving from the Port Everglades,

Fla., had been exposed to Norwalk

Virus. The illness, whose symptoms include nausea, abdominal pain, as well as the chronic vomiting and diarrhea that had plagued the stricken passengers, was not being spread through food preparation, but rather through infected passengers and crew, who had already been exposed to the germ, and would then carry the virus onboard with them.

The highly-contagious virus, which did not favor one particular cruise line, -cofiPOfiiinaN

Marinization, Repair, and Duplication of Obsolete Parts available upon request.

Please Contact us for all of your exhaust needs.