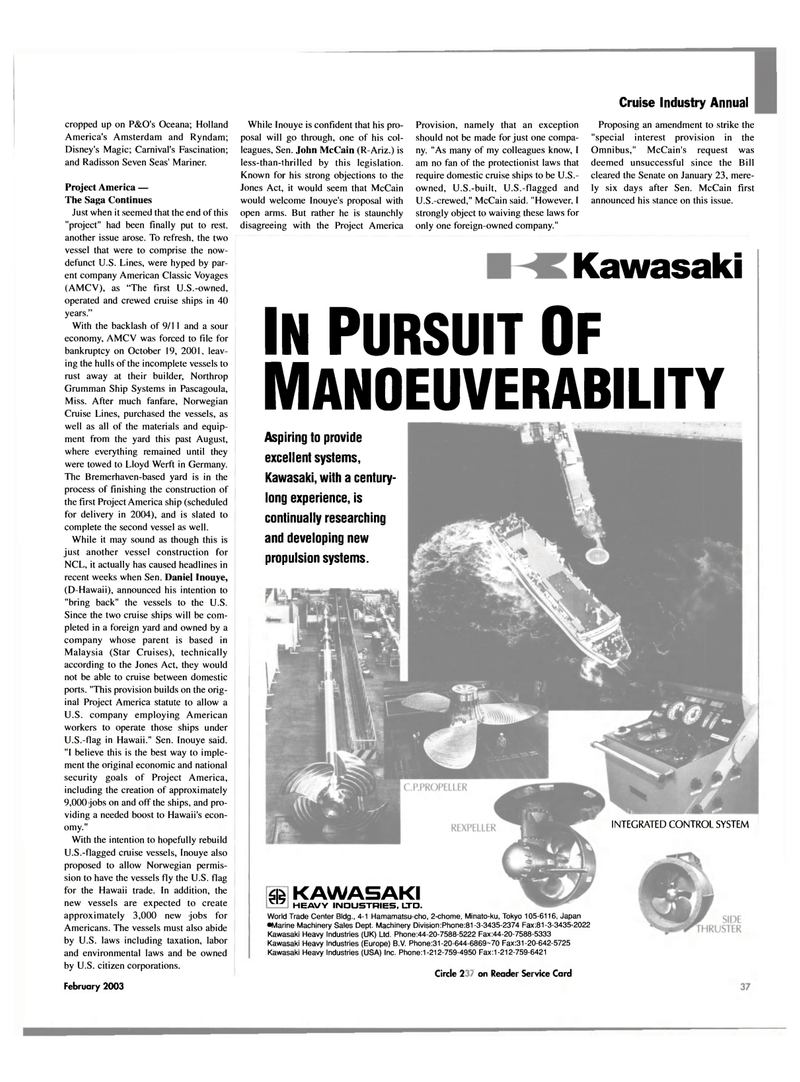 cropped up on P&O's Oceana; Holland

Just when it seemed that the end of this "project" had been finally put to rest, another issue arose. To refresh, the two vessel that were to comprise the now- defunct U.S. Lines, were hyped by par- ent company American Classic Voyages (AMCV), as "The first U.S.-owned, operated and crewed cruise ships in 40 years."

With the backlash of 9/11 and a sour economy, AMCV was forced to file for bankruptcy on October 19, 2001. leav- ing the hulls of the incomplete vessels to rust away at their builder, Northrop

Miss. After much fanfare, Norwegian

Cruise Lines, purchased the vessels, as well as all of the materials and equip- ment from the yard this past August, where everything remained until they were towed to Lloyd Werft in Germany.

The Bremerhaven-based yard is in the process of finishing the construction of the first Project America ship (scheduled for delivery in 2004), and is slated to complete the second vessel as well.

NCL, it actually has caused headlines in recent weeks when Sen. Daniel Inouye, (D-Hawaii), announced his intention to "bring back" the vessels to the U.S.

Malaysia (Star Cruises), technically according to the Jones Act, they would not be able to cruise between domestic ports. "This provision builds on the orig- inal Project America statute to allow a

U.S. company employing American workers to operate those ships under

U.S.-flag in Hawaii." Sen. Inouye said. "I believe this is the best way to imple- ment the original economic and national security goals of Project America, including the creation of approximately 9,000 jobs on and off the ships, and pro- viding a needed boost to Hawaii's econ- omy."

With the intention to hopefully rebuild

U.S.-flagged cruise vessels, Inouye also proposed to allow Norwegian permis- sion to have the vessels fly the U.S. flag for the Hawaii trade. In addition, the new vessels are expected to create approximately 3,000 new jobs for

Americans. The vessels must also abide by U.S. laws including taxation, labor and environmental laws and be owned by U.S. citizen corporations.

While Inouye is confident that his pro- posal will go through, one of his col- leagues, Sen. John McCain (R-Ariz.) is less-than-thrilled by this legislation.

Known for his strong objections to the

Jones Act, it would seem that McCain would welcome Inouye's proposal with open arms. But rather he is staunchly disagreeing with the Project America

Provision, namely that an exception should not be made for just one compa- ny. "As many of my colleagues know, 1 am no fan of the protectionist laws that require domestic cruise ships to be U.S.- owned, U.S.-built, U.S.-flagged and

U.S.-crewed," McCain said. "However, I strongly object to waiving these laws for only one foreign-owned company."

Proposing an amendment to strike the "special interest provision in the

Omnibus," McCain's request was deemed unsuccessful since the Bill cleared the Senate on January 23, mere- ly six days after Sen. McCain first announced his stance on this issue.