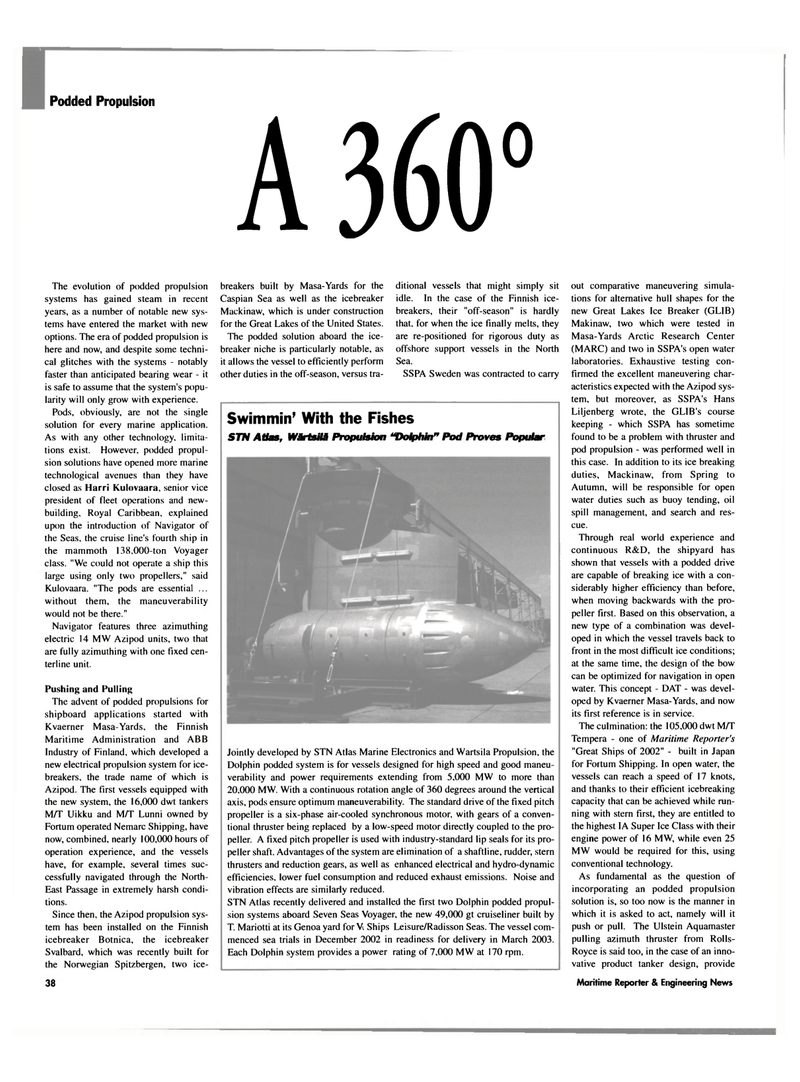 The evolution of podded propulsion systems has gained steam in recent years, as a number of notable new sys- tems have entered the market with new options. The era of podded propulsion is here and now, and despite some techni- cal glitches with the systems - notably faster than anticipated bearing wear - it is safe to assume that the system's popu- larity will only grow with experience.

Pods, obviously, are not the single solution for every marine application.

As with any other technology, limita- tions exist. However, podded propul- sion solutions have opened more marine technological avenues than they have closed as Harri Kulovaara, senior vice president of fleet operations and new- building, Royal Caribbean, explained upon the introduction of Navigator of the Seas, the cruise line's fourth ship in the mammoth 138,000-ton Voyager class. "We could not operate a ship this large using only two propellers," said

Kulovaara. "The pods are essential ... without them, the maneuverability would not be there."

The advent of podded propulsions for shipboard applications started with

Industry of Finland, which developed a new electrical propulsion system for ice- breakers, the trade name of which is

Azipod. The first vessels equipped with the new system, the 16,000 dwt tankers

Fortum operated Nemarc Shipping, have now, combined, nearly 100,000 hours of operation experience, and the vessels have, for example, several times suc- cessfully navigated through the North-

Since then, the Azipod propulsion sys- tem has been installed on the Finnish icebreaker Botnica, the icebreaker

Svalbard, which was recently built for the Norwegian Spitzbergen, two ice- breakers built by Masa-Yards for the

Caspian Sea as well as the icebreaker

Mackinaw, which is under construction for the Great Lakes of the United States.

The podded solution aboard the ice- breaker niche is particularly notable, as it allows the vessel to efficiently perform other duties in the off-season, versus tra- ditional vessels that might simply sit idle. In the case of the Finnish ice- breakers, their "off-season" is hardly that, for when the ice finally melts, they are re-positioned for rigorous duty as offshore support vessels in the North

SSPA Sweden was contracted to carry

Swimmin' With the Fishes

Dolphin podded system is for vessels designed for high speed and good maneu- verability and power requirements extending from 5,000 MW to more than 20.000 MW. With a continuous rotation angle of 360 degrees around the vertical axis, pods ensure optimum maneuverability. The standard drive of the fixed pitch propeller is a six-phase air-cooled synchronous motor, with gears of a conven- tional thruster being replaced by a low-speed motor directly coupled to the pro- peller. A fixed pitch propeller is used with industry-standard lip seals for its pro- peller shaft. Advantages of the system are elimination of a shaftline, rudder, stern thrusters and reduction gears, as well as enhanced electrical and hydro-dynamic efficiencies, lower fuel consumption and reduced exhaust emissions. Noise and vibration effects are similarly reduced.

T. Mariotti at its Genoa yard for V. Ships Leisure/Radisson Seas. The vessel com- menced sea trials in December 2002 in readiness for delivery in March 2003.

Makinaw, two which were tested in

Liljenberg wrote, the GLIB's course keeping - which SSPA has sometime found to be a problem with thruster and pod propulsion - was performed well in this case. In addition to its ice breaking duties, Mackinaw, from Spring to

Autumn, will be responsible for open water duties such as buoy tending, oil spill management, and search and res- cue.

Through real world experience and continuous R&D, the shipyard has shown that vessels with a podded drive are capable of breaking ice with a con- siderably higher efficiency than before, when moving backwards with the pro- peller first. Based on this observation, a new type of a combination was devel- oped in which the vessel travels back to front in the most difficult ice conditions; at the same time, the design of the bow can be optimized for navigation in open water. This concept - DAT - was devel- oped by Kvaerner Masa-Yards, and now its first reference is in service.

Tempera - one of Maritime Reporter's "Great Ships of 2002" - built in Japan for Fortum Shipping. In open water, the vessels can reach a speed of 17 knots, and thanks to their efficient icebreaking capacity that can be achieved while run- ning with stern first, they are entitled to the highest IA Super Ice Class with their engine power of 16 MW, while even 25

MW would be required for this, using conventional technology.

As fundamental as the question of incorporating an podded propulsion solution is, so too now is the manner in which it is asked to act, namely will it push or pull. The Ulstein Aquamaster pulling azimuth thruster from Rolls-

Royce is said too, in the case of an inno- vative product tanker design, provide 38 Maritime Reporter & Engineering News