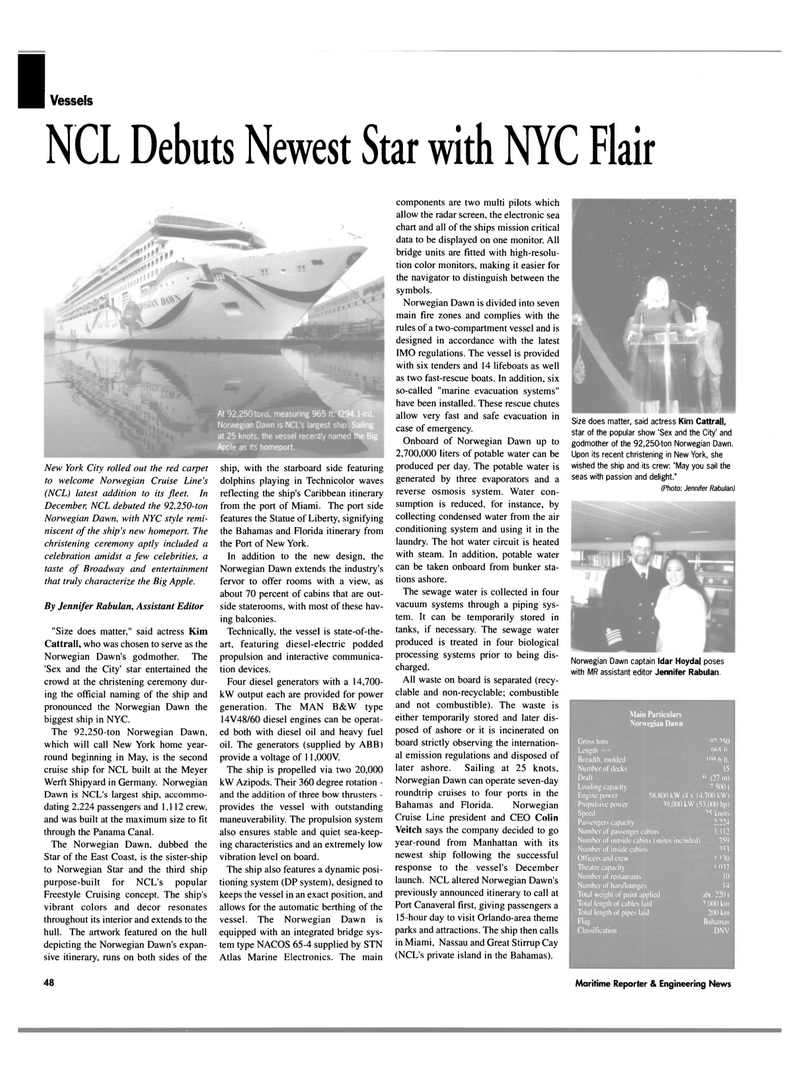 NCL Debuts Newest Star with NYC Flair components are two multi pilots which allow the radar screen, the electronic sea chart and all of the ships mission critical data to be displayed on one monitor. All bridge units are fitted with high-resolu- tion color monitors, making it easier for the navigator to distinguish between the symbols.

IMO regulations. The vessel is provided with six tenders and 14 lifeboats as well as two fast-rescue boats. In addition, six so-called "marine evacuation systems" have been installed. These rescue chutes allow very fast and safe evacuation in case of emergency.

Onboard of Norwegian Dawn up to 2,700,000 liters of potable water can be produced per day. The potable water is generated by three evaporators and a reverse osmosis system. Water con- sumption is reduced, for instance, by collecting condensed water from the air conditioning system and using it in the laundry. The hot water circuit is heated with steam. In addition, potable water can be taken onboard from bunker sta- tions ashore.

The sewage water is collected in four vacuum systems through a piping sys- tem. It can be temporarily stored in tanks, if necessary. The sewage water produced is treated in four biological processing systems prior to being dis- charged.

All waste on board is separated (recy- clable and non-recyclable; combustible and not combustible). The waste is either temporarily stored and later dis- posed of ashore or it is incinerated on board strictly observing the internation- al emission regulations and disposed of later ashore. Sailing at 25 knots,

Veitch says the company decided to go year-round from Manhattan with its newest ship following the successful response to the vessel's December launch. NCL altered Norwegian Dawn's previously announced itinerary to call at

Size does matter, said actress Kim Cattrall, star of the popular show 'Sex and the City' and godmother of the 92,250-ton Norwegian Dawn.

Upon its recent christening in New York, she wished the ship and its crew: "May you sail the seas with passion and delight." (Photo: Jennifer Rabulan)

New York City rolled out the red carpet to welcome Norwegian Cruise Line's (NCL) latest addition to its fleet. In

Norwegian Dawn, with NYC style remi- niscent of the ship's new homeport. The christening ceremony aptly included a celebration amidst a few celebrities, a taste of Broadway and entertainment that truly characterize the Big Apple.

Cattrall, who was chosen to serve as the

Norwegian Dawn's godmother. The 'Sex and the City' star entertained the crowd at the christening ceremony dur- ing the official naming of the ship and pronounced the Norwegian Dawn the biggest ship in NYC.

The 92,250-ton Norwegian Dawn, which will call New York home year- round beginning in May, is the second cruise ship for NCL built at the Meyer

Dawn is NCL's largest ship, accommo- dating 2,224 passengers and 1,112 crew, and was built at the maximum size to fit through the Panama Canal.

The Norwegian Dawn, dubbed the

Star of the East Coast, is the sister-ship to Norwegian Star and the third ship purpose-built for NCL's popular

Freestyle Cruising concept. The ship's vibrant colors and decor resonates throughout its interior and extends to the hull. The artwork featured on the hull depicting the Norwegian Dawn's expan- sive itinerary, runs on both sides of the ship, with the starboard side featuring dolphins playing in Technicolor waves reflecting the ship's Caribbean itinerary from the port of Miami. The port side features the Statue of Liberty, signifying the Bahamas and Florida itinerary from the Port of New York.

In addition to the new design, the

Norwegian Dawn extends the industry's fervor to offer rooms with a view, as about 70 percent of cabins that are out- side staterooms, with most of these hav- ing balconies.

Four diesel generators with a 14,700- kW output each are provided for power generation. The MAN B&W type 14V48/60 diesel engines can be operat- ed both with diesel oil and heavy fuel oil. The generators (supplied by ABB) provide a voltage of 11,000V.

The ship is propelled via two 20,000 kW Azipods. Their 360 degree rotation - and the addition of three bow thrusters - provides the vessel with outstanding maneuverability. The propulsion system also ensures stable and quiet sea-keep- ing characteristics and an extremely low vibration level on board.

The ship also features a dynamic posi- tioning system (DP system), designed to keeps the vessel in an exact position, and allows for the automatic berthing of the vessel. The Norwegian Dawn is equipped with an integrated bridge sys- tem type NACOS 65-4 supplied by STN

Number of inside cabins 353

Total weight of paint applied abt. 2201