A propulsion casualty aboard the 760-ft. (231.6-m) SS Matsonia in June created a unique opportunity for the private sector and the Navy to work together and maintain a vital supply line to Hawaii — a cooperative effort between Pearl Harbor Navy Shipyard and Honolulu Shipyard, Inc.

The Matson flagship vessel, which experienced an intermediate shaft failure 700 miles off Oahu, was brought to the Navy's 1,100-ft.

Bill Clifford, president and CEO of Honolulu Shipyard also noted that the cooperation and teamwork demonstrated between agencies (government, military and private) is unprecedented tor this type of emergency repair effort.

U.S. Rep. Neil Abercrombie. (D-Hawaii). is working on a pilot program at Pearl Harbor that would bring one of the 11 maritime pre-position ships that act as forward- based stocks of U.S. military equipment in the Pacific. The ships bypass Hawaii, pass through the Panama Canal, offload equipment in Florida, and head up the East Coast for repairs that keep them out of operation for four months — twice as long as they would be if they dry docked in Hawaii. 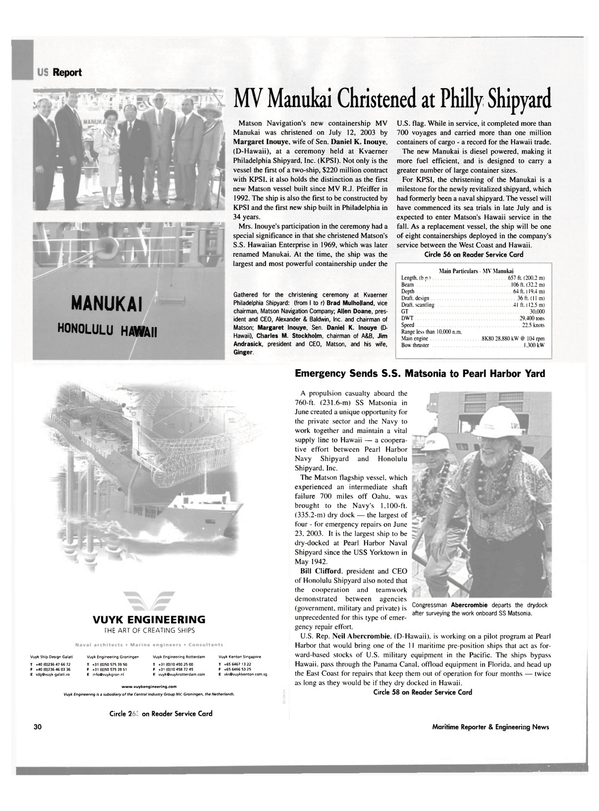